CarTrade is zero-debt, has cash reserves and is profitable. Why is it's stock getting battered?

Vinay Sanghi steered CarTrade to a public listing after over a decade of hustle. Seventeen months later, the stock is down by over 70 percent from its issue price. Sanghi reflects on life after IPO and how it's changed his attitude as an entrepreneur 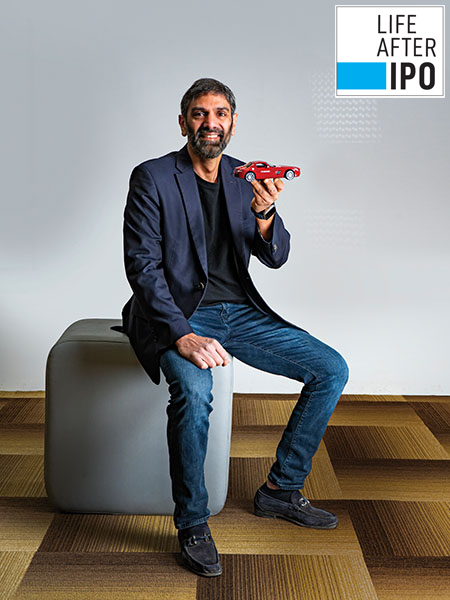 Any high-risk decision invariably comes loaded with hyper anxiety. Vinay Sanghi had a tryst with this extreme emotion towards the fag end of 2015. The Mumbai-based entrepreneur started Mahindra First Choice Wheels, a multi-brand used vehicles venture in collaboration with Mahindra Group and HDFC, in 1999. A decade later, he founded CarTrade in 2009. Six years into his solo journey, the entrepreneur spotted a massive opportunity in acquiring strong rival Carwale. Backed by Warburg Pincus, Tiger Global Management and JP Morgan, CarTrade was reportedly valued at around $100 million during its last funding in October 2014. For the founder who inherited the craft and learnt the nuances of the trade from his family’s auto dealership business, Sah & Sanghi, Sanghi was satisfied with CarTrade’s sedate, organic pace of growth.

But, in 2015, Sanghi was left with little choice but to step on the gas. The car deal street started buzzing with action. Another competitor, CarDekho, was in talks to snap up ZigWheels. As other top players also actively looked at pressing the consolidation button, Sanghi too swung into action, and started exploring a stock-swap deal with Carwale, which had a revenue of ₹33.83 crore and a loss of ₹48.65 crore in FY15. “It started as a merger talk, but somewhere down the line, they decided to exit for cash,” recalls Sanghi, who was now in a fix. Reason: He didn’t have money. “It morphed into an all-cash deal, and we didn’t have cash for the buyout,” he recounts.

There was another problem. There was no U-turn for Sanghi as the discussions and diligence entered the final lap. In fact, it was a Catch-22 situation. Sanghi got three months to raise the capital, and if he failed, CarTrade would be staring at the possibility of coughing up a staggering break fee. “The fee would have anyway crippled us,” says Sanghi, explaining his dilemma. There was another issue to deal with. The board of CarTrade was opposed to the idea of an all-cash deal. “You don’t have the cash. And even if you get the cash, will the buyout play out?” was the big question hurled at the entrepreneur, who was excited with the great customer engagement metrics of Carwale and backed his conviction to the hilt. “It was a high-risk bet,” recalls Sanghi, who was battling high levels of anxiety. Luckily, a new investor, Temasek, came to the rescue and Carwale was bought for a staggering ₹672 crore. 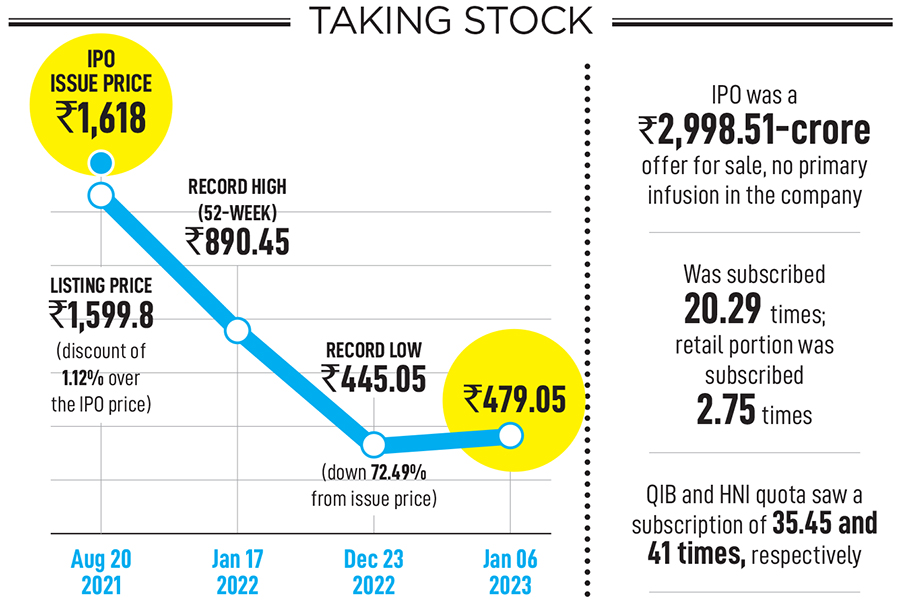 Fast forward to August 20, 2021. Sanghi was coming to terms with another intense emotion. Founded in 2009, CarTrade got listed after close to a dozen years. The moment called for a grand celebration as the company got married to the public market. But there was no honeymoon. “In fact, we did have it, but it lasted for just a minute. It was over the moment we rang the bell,” recalls Sanghi, who couldn’t enjoy the euphoria of the listing. The reason was not hard to fathom. CarTrade got listed at ₹1,599.8, a discount of 1.12 percent over the IPO price of ₹1,618. “The emotion of having a price lower than the IPO was really hard to deal with,” he says in a tormented voice. “It was probably the toughest part of the entire journey of over 11 years to be honest.”

What followed immediately was even tougher. Sanghi was suddenly hit with a realisation that people who invested in the IPO had lost money. The context and the performance of the company leading to the IPO also added to his turmoil. Since 2018, the company has posted profits and steady revenue. “We are still one of the few profitable new-age tech companies in India,” he says. The discounted listing broke his heart. “The biggest emotion you go through is helplessness,” says the anguished entrepreneur who was baffled with the market reaction. As an entrepreneur, he lets on, one always feels on top of things. “The public market is one place that makes you feel helpless. There is nothing that you can do,” he rues.

A subdued listing, though, was only the beginning of his agony. Over a year later, came the lowest point in December. The stock tumbled to a record low of ₹445.05, down 72.49 percent from the issue price. Sanghi’s feeling of helplessness got acute. “Look at our performance,” he points out the numbers. Last year, the company posted a 25 percent growth in topline, and similar percent growth in Ebitda. During the first six months, there was again tremendous growth in Ebitda, profitability and topline. “And what you see is the stock price still going down. It’s difficult to digest,” he adds.

What made the feeling even more unpalatable was a clutch of facts around the IPO. First, the company didn’t raise a single rupee. “It was completely an offer for sale,” he says. Second, most of his investors had made loads of money by exiting the company. “Warburg bought Tiger Global out, Temasek bought Epiphany Ventures out and JP Morgan bought Canaan Partners out,” he says, adding that all seed and venture investors made a lot of money. When you get listed, he explains, and when the company has had a track record of providing fantastic exits to the shareholders till then, tumbling of the stock and people losing money are the worst nightmares. “As a founder, I want my shareholders to make more money,” he says.

The anxiety persisted during the first few months. Sanghi was haunted with questions like ‘Did the company do something wrong?’ and ‘Has the dip anything to do with the global tech downturn?’ There were no clear answers. In fact, Sanghi needs one more question to answer. “Did he get the pricing of the IPO right?” we ask. “Was ₹1,618 a fair price?” Sanghi goes on mute for a few seconds, and then shares his take. “The price is market discovered. Back then, in those markets, the price was right,” he says, quickly underlining another grim reality that markets change frequently. “If you’re going to list today, it may be a different situation. The reality is market-driven,” he reckons. 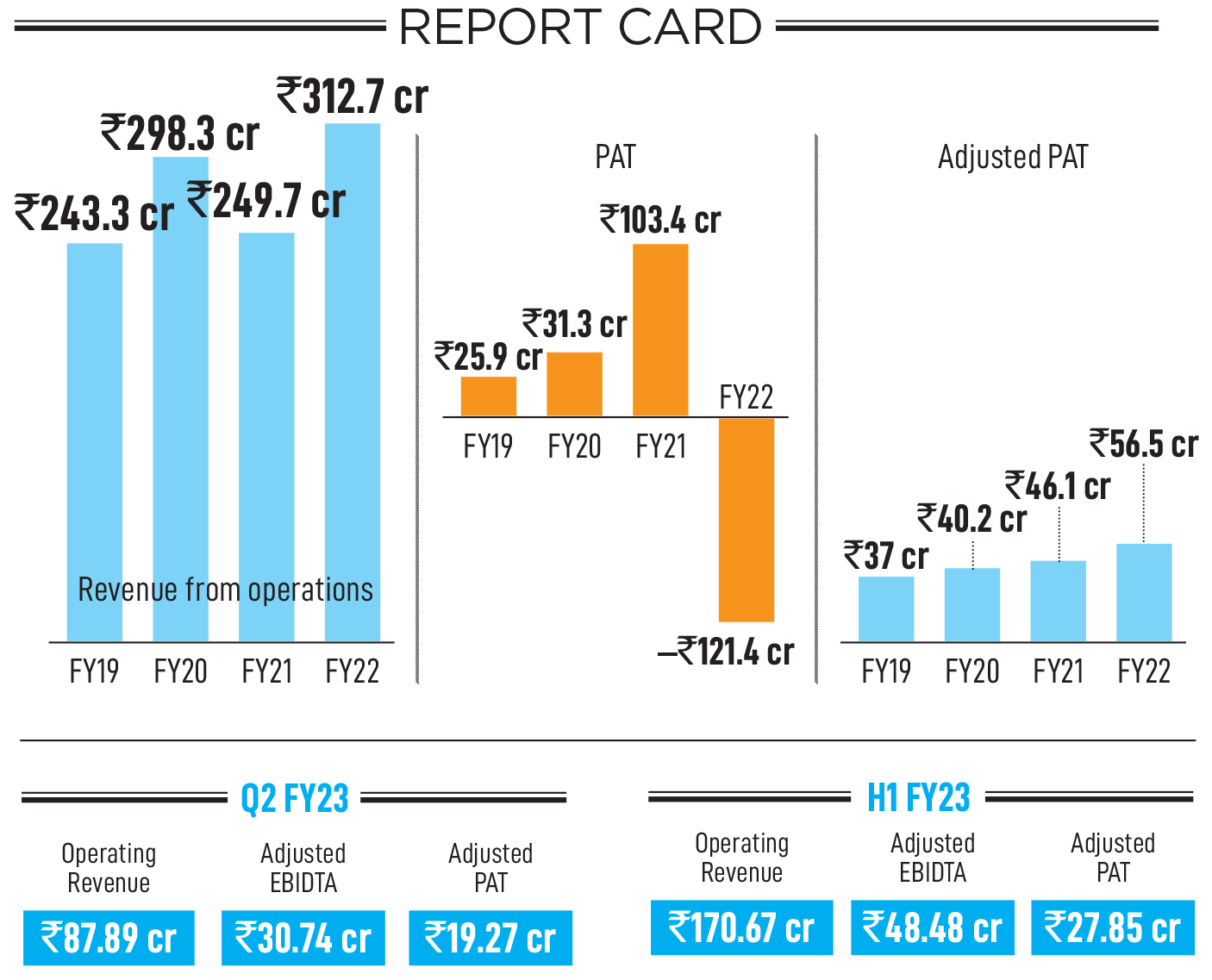 There is another reality pointed out by market analysts. In its brokerage report on CarTrade in May, JM Financial pointed out the company has the potential to provide sustained cash flows and has a highly favourable risk-reward ratio. While the peers continue to incur significant operating losses, CarTrade has maintained adjusted profit after tax level (PAT) profitability since FY19 and is expected to continue delivering profit growth in the future expect for a blip in FY22 due to extraordinary ESOP expenses, the report underlined. As it turned out, in FY22, the company posted a negative PAT of ₹121.35 crore. Though adjusted PAT numbers stood at ₹56.52 crore.

The report ended by highlighting another interesting reality. “Unlike other recently listed new age companies, we do not expect CarTrade to deliver 40 percent-plus revenue CAGR with its core business models not being disruption-led,” it underlined. However, it is expected to generate sustained and increasing free cash flows while the peers require investors’ money to sustain, it highlighted.

Sanghi, for his part, talks about another unfortunate reality which has become part of his life after the listing. “I have become more circumspect,” he says when asked how life has changed after the listing. “That is not my nature,” he adds. A person who can take a company public in 10 years can’t be billed as conservative, he continues. “Becoming more circumspect is the negative part,” he says, pointing out another change in the life of the founder. “No matter what we say, now we are governed by a quarter,” he smiles. “I am still getting used to this quarter versus the long-term thing, but haven’t fully been in tune with it to be honest,” he quips.

The listing has also seeped in a new set of realisation. “We might need to be more thick-skinned and go back to what we should do, which is building long-term value for shareholders,” he says. Ask him if he has any suggestions for those who are planning to take their companies public, and Sanghi quickly dishes out a golden nugget. “Get the right set of anchor shareholders. Don’t take too many. Don’t take too little,” he says.

Tweets by @forbesindia
We don't like domineering bosses. So why do we put up with them?
Photo of the day: Back to the nest