Sudden spurt in IPO markets: What changes in the second half of FY23?

The dry spell is set to end as 10-15 companies are likely to raise upwards of Rs20,000 crore. Experts say companies' capital requirement and valuations getting reasonable have accelerated the change 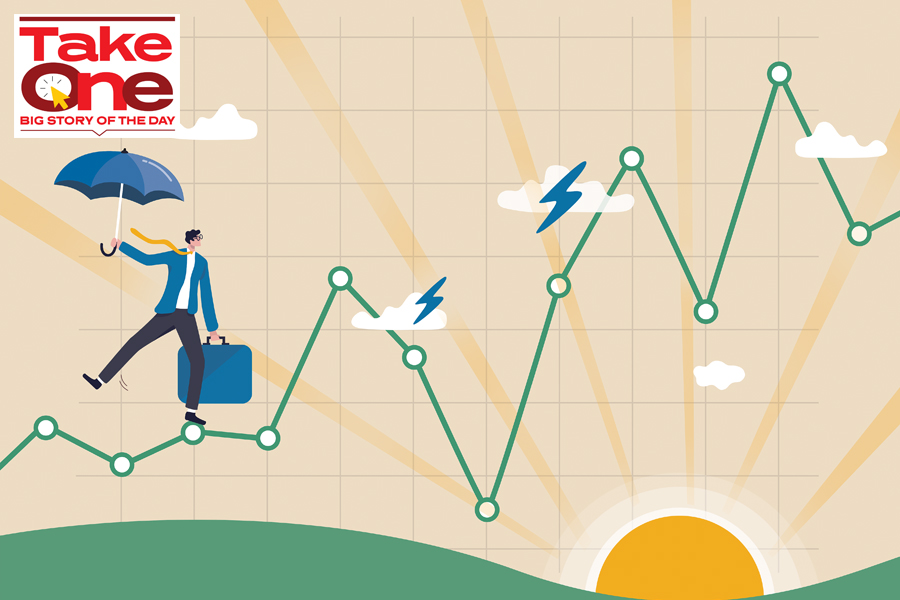 According to experts, a mix of multiple factors may lead to a new deluge of IPOs. Capital requirement for companies and valuations gradually getting reasonable have accelerated the primary markets’ activities again Illustration: Chaitanya Dinesh Surpur

Following a lull in the primary markets, fund raising through initial public offerings (IPO) is once again picking pace even as stock market investors continue to remain jittery on concerns of recessionary pressures and higher interest rates amid surging inflation. Weak economy and downturn in equities have begun to spark fears of a longer period of slowdown in overall global growth adding to the uncertainties and nervousness in markets.

However, the second half of fiscal 2023 is expected to break the dry spell of IPOs in India with a fresh bout of enthusiasm and fervour. According to industry estimates, around 10-15 companies are likely to raise upwards of Rs20,000 crore via IPOs in the second half of FY23.

Data from Prime Database showed 71 companies have proposed to raise a hefty Rs105,000 crore and have received approval from the Securities and Exchange Board of India (Sebi). In addition to that, 43 more companies are aiming to raise about Rs70,000 crore and are awaiting the market regulator’s approval.

Out of these 114 issues, 10 belong to new-age technology companies that are looking to raise roughly Rs35,000 crore. Few of the companies which are expected to IPO in the second half of FY23 are in segments of non-banking financial companies small and medium enterprises (NBFC-SME) financing, luxury auto-dealership, hospital chain, auto-ancillary, NBFC-MFI, wine distillery and retail food chain.

It’s not that the market conditions have become any better.

So, what explains the euphoria?

According to experts, a mix of multiple factors may lead to a new deluge of IPOs. Capital requirement for companies and valuations gradually getting reasonable have accelerated the primary markets’ activities again, they say.

“IPO is another form of fund raising and companies need to carefully assess both their liquidity needs and market conditions before taking a decision. Investors are increasingly more selective, with a focus on profitability, cash flows and product market fit. In addition, there are changes in the regulatory landscape which need to be considered. There is significant capital for the right company with valuation expectations that need to be managed,” says Veenit Surana, partner, financial accounting advisory services, EY India. “Many companies have already raised significant capital during 2021. As capital is required and valuation expectations settle to reasonable levels, IPO markets will accelerate again. Investors are being more circumspect in making investment decisions and taking longer to close deals and the cost of capital has also gone up.”

In September, Sebi tightened disclosure norms for IPOs to bring transparency in issue pricing after a sharp fall of investor wealth in previous blockbuster issues like Paytm and Zomato. The market regulator has made it mandatory for companies launching IPOs to disclose key performance indicators (KPI), information on pricing of shares from private equity players, weighted average cost of acquisition of primary and secondary transactions, non-confidential filings etc. The new rules are expected to give investors better basis to make their decisions and ensure there is no information asymmetry.

Surana adds that, therefore, companies are now taking time to be well-prepared to launch their IPO based on business performance, including FY23 results and market appetite during the year.

According to Bharat Lahoti, fund manager, Edelweiss AMC, IPO market activities have picked up again as stock markets have shown some stability. Lahoti feels that newly listed companies that are showing earnings momentum and demanding a reasonable valuation relative to peers have seen decent demand. He is optimistic that unique companies with strong fundamentals will be able to attract investors in the IPO space. 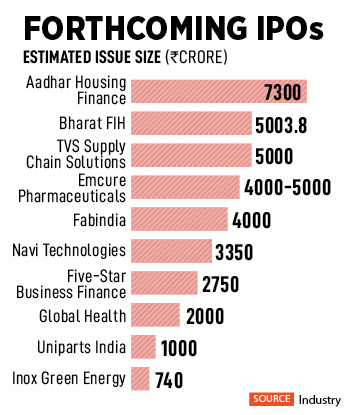 “IPO activity will be impacted by the volatility in the secondary market mainly because of recessionary fears and rising interest rates. IPO is a once-in-a-lifetime event for a company and, as seen several times in the past, companies would prefer to let their approval lapse rather than launching their IPO in a volatile market,” adds Haldea.

Markets around the world have seen a sharp fall, with the Indian benchmark Nifty being still marginally positive in this year so far. Markets in other global peers such as South Korea, Taiwan, China, Germany and France are down by over 20 percent this year. The US Federal Reserve has hiked key interest rates by 75 basis points to tackle inflation and they are likely to be raised further. The Reserve Bank of India increased rates by 50 bps for the third time.

According to Prime Database, 14 Indian corporates raised Rs35,456 crore through IPOs in the first half of FY23, a decline of 32 percent compared to Rs51,979 crore raised through 25 IPOs in the same period the previous fiscal. Out of the total IPOs in FY23, Rs20,557 crore or 58 percent of the amount was raised just by the Life Insurance Corporation of India (LIC) IPO. In April to September FY23, overall public equity fundraising also dropped by 55 percent to Rs41,919 crore from Rs92,191 crore in the corresponding period of the previous year.

Following LIC, some of the biggest issues in this period were Delhivery (Rs5,235 crore) and Rainbow Children's (Rs1,581 crore). Only one out of the 14 IPOs (Delhivery) was from a new-age technology company, indicating a slowdown in IPOs from the sector. Of the 14 IPOs, four issues received a mega response of more than 10 times (one IPO more than 50 times) while three were oversubscribed by more than three times. The remaining seven IPOs were oversubscribed between one and three times. The new HNI segment (Rs2 lakh-Rs10 lakh) saw an encouraging response with five issues receiving a response of more than 10 times. 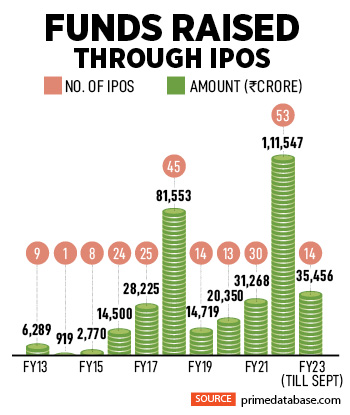 In comparison to the previous fiscal, the response of retail investors also moderated. The average number of applications from retail dropped to 7.57 lakh in comparison to 15.56 lakh in 2021-22 and 12.49 lakh in 2020-21. The highest number of applications from retail were received by LIC (32.76 lakh) followed by Harsha Engineers (23.86 lakh) and Campus Activewear (17.27 lakh).

“With new tighter regulations for IPO funding, splitting of HNI category and changing allocation methodology for HNI segments, we are seeing some softening of subscription numbers for this segment. Also, some of the retail participants have moved to this category to take advantage of new allotment rules in the HNI category which might have resulted in some moderation in the retail segment. However, we believe companies displaying characteristics of having differentiating business model/strong moat/earnings momentum and those that are priced reasonably will see enough demand,” says Lahoti.

However, Lahoti believes appetite and liquidity are not constraints for selective companies which is visible in the large stake sale by private equity players. KKR recently offloaded its entire stake in Max Healthcare amounting to Rs9,000 crore, Blackstone offloaded its stake in Sona BLW worth Rs4,000 crore and Great Terrain Investment Ltd offloaded 3.79 percent stake in the CAMS.

In the first half of FY23, 74.78 percent of the total fund raised via IPOs was meant for offer-for-sale while it was 63.5 percent in the entire FY22. In the previous year, a record Rs111,546.62 crore were raised in the primary markets.

IPOs typically comprise growth and/or exit (OFS) capital. If companies need fresh capital, IPO in one such avenue they tap, furthermore private equity firms develop an exit strategy for each business during the acquisition process, according to Surana.

“During 2021, there were a number of companies whose objects of the issue were largely related to OFS. With record valuations and high liquidity in 2021, there was increased incentive by PE/VC firms to optimise value in their transaction deal cycle. In 2022, around 60 percent of the companies that have gone public have an issue size of less than Rs1,000 crore—many of which are raising fresh capital for growth. While we saw a number of exits in 2021 by PE/VC firms, they are now raising capital through new funds for further investment. While overall PE activity remained sluggish, it will continue to remain so till valuation expectations are correct,” Surana says.

A sign of worry is issues collectively worth Rs26,480 crore are bound to see expiry of their IPO approval by Sebi, as per estimates done by Prime Database. Typically, the market regulator allows a year after the date of approval to launch the IPO in markets, failure of which leads to expiry.

Two issues— Penna Cement Industries and ESAF Small Finance Bank—worth Rs2,548 crore are set expire in October. A total of eight and nine issues will expire in November and December if the companies do not launch their IPOs within the time period.

“Companies look for more stabilisation before announcing their IPO plans. Learnings from the performance of 2021 IPOs has impacted companies’ desire to go public. An IPO is a transformative journey from private to public typically requiring preparation for more than 12 months. The current pipeline has a variety of companies across sectors that have announced their plans to go public. These include technology/ ecommerce platforms, financial services and a diversified industrial sector which will attract further investment,” says Surana.

However, secondary market sentiments are likely to stay tepid amid global pressures and that may be a deterrent to the flurry of IPOs expected in the second half of FY23. Some may even opt for a lapse rather than a weak listing.

“While earnings could see some support in the September quarter, from an early festive season, we believe deterioration in global macro and valuations concerns could catch up with the Indian markets," according to Jefferies, a financial services company.

Tweets by @forbesindia
Museums around the world are joining forces to address mental health challenges
Photo of the day: Floating post office