Life after IPOs: From sizzling highs to sobering lows, Humpy Dumpty had a great fall

India's many blockbuster IPOs have dwindled since they listed on the stock markets and life after IPO is much different than anticipated. However, experts believe there's no reason for gloom and doom 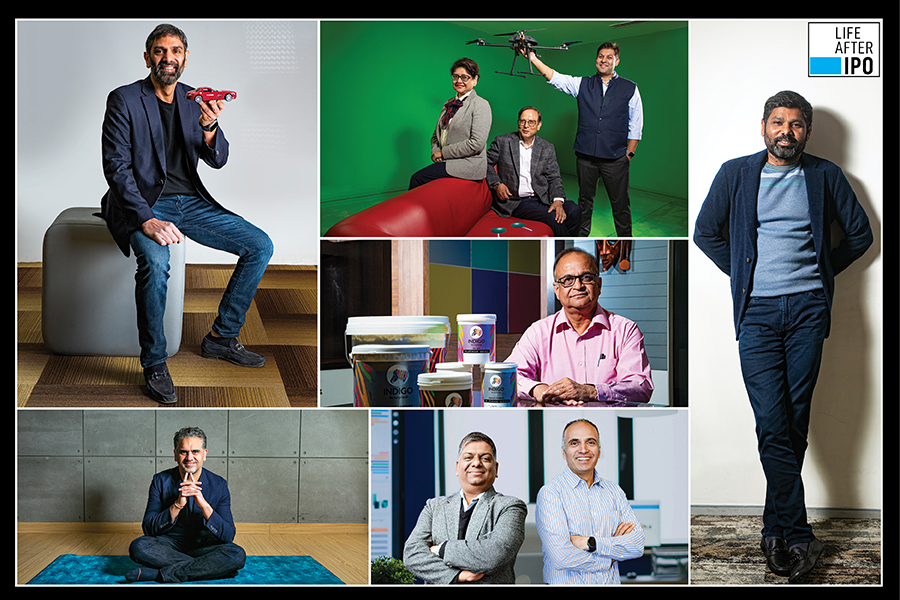 Humpty Dumpty sat on a wall, Humpty Dumpty had a great fall… this is how a venture capitalist (VC) describes the state of public-listed companies across the globe. The funder, requesting anonymity as his VC firm backed one of the “over-hyped IPOs” that India saw over the last two years, starts by citing the US market, which is in the midst of a brutal tech meltdown on the back of soaring inflation, rising interest rates, Covid-induced supply chain constraints, and a turbulent macro environment, including the Ukraine war. Amazon’s stock tumbled by over 50 percent in 2022. This was the biggest fall since 2000, when the stock plunged 80 percent.

Now, let’s talk about Tesla and Meta, which reportedly lost over 65 percent last year. Netflix too crashed by 51 percent as subscribers waned and the advertising market turned choppy. In fact, for the quarter-ended June 2022, Netflix lost users for the first time in over a decade. Amid the carnage, even Apple failed to insulate itself. The stock reportedly dropped 26.8 percent, the worst yearly performance since 2008. “Everybody fell. Even the best performers looked plebeian,” says the VC.

Meanwhile, in India, the picture is more or less the same. “Humpties are feeling the heat,” says the VC. Widely dubbed as blockbuster IPOs, stocks of Paytm, Policybazaar, Zomato, and Nykaa fell between 50.5 percent and 60 percent in 2022. The fall also reflected another reality that is difficult to gloss over. The last peak season of IPOs—63 in 2021-22—was an aberration, much like 45 listings in 2017-18, according to data by Prime Database.

There is no reason, though, for gloom and doom. Vishal Mahadevia tells Forbes India why there will be light at the end of the tunnel. “Stock markets have always been a roller coaster going back in the arc of time,” says the managing director, head of India, and member of the executive management group at Warburg Pincus. The markets, he adds, has the added excitement of overshooting on the way up in frothy times and over-correcting on the way down. “When markets normalise, we would expect that shareholders of companies with continued business outperformance like CarTrade will be justifiably rewarded,” adds Mahadevia. Warburg Pincus (Highdell Investment Ltd) has a 17.44 percent stake in CarTrade, which got listed in 2021 at a discount of 1.12 percent over the issue price of ₹1,618. “The CarTrade team has grown the core business and delivered steady business outperformance in a noisy stock market environment,” he adds.

Back in 2021, there was indeed a lot of noise. Sixty-three Indian corporates raised ₹118,723 crore, a record high in India. A year later, though, the pace slowed down considerably. Forty companies raised ₹59,412 crore through main-board IPOs in 2022, which is half the number clocked in 2021, according to Prime Database.

Also read: Life After IPOs: What newly listed companies can learn from TCS

Experts are not surprised by the performance. “The IPO response was muted by moderate listing performance,” points out Pranav Haldea, managing director at Prime Database Group. Average listing gain (based on closing price on listing date) fell to 10 percent in comparison to 32.19 percent in 2021, and 43.82 percent in 2020. 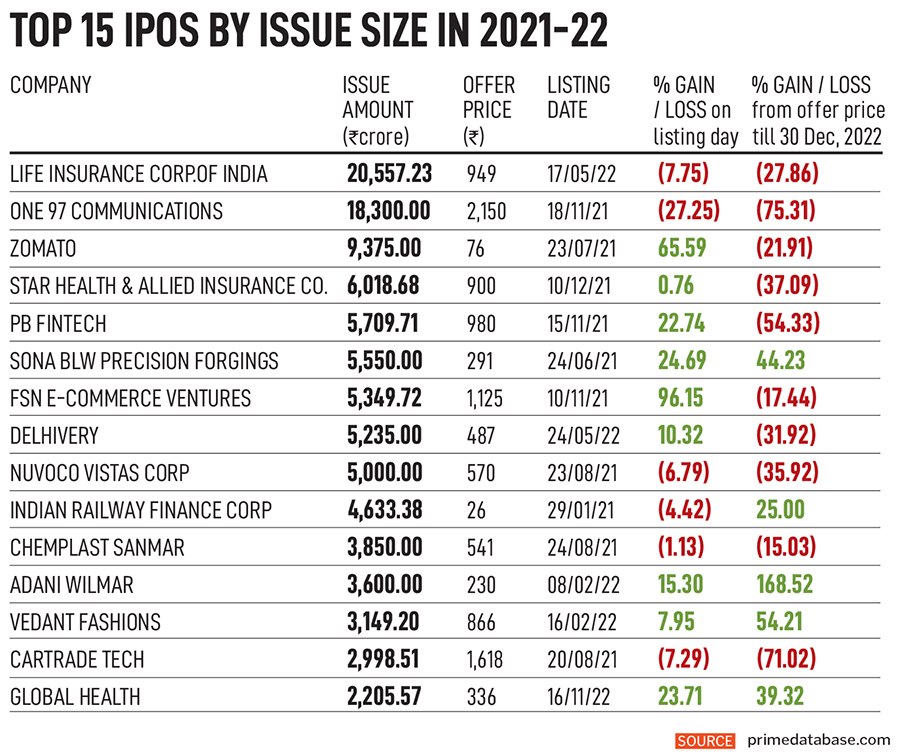 Of the IPOs that got listed in 2022, 17 gave a return of over 10 percent. There were high performers as well. Take, for instance, DCX Systems, which gave a stupendous return of 49 percent followed by Harsha Engineers and Hariom Pipe Industries (47 percent each). In fact, 23 of the IPOs are trading above the issue price (closing price of December 30, 2022).

The future, too, looks promising. The IPO pipeline continues to remain strong. Fifty-four companies, proposing to raise a staggering ₹84,000 crore, have got Securities and Exchange Board of India (Sebi) approval. Then there are 33 companies looking to raise about ₹57,000 crore that are awaiting the nod. Out of these 87 companies, eight are new-age technology companies (NATCs) that are looking to raise roughly ₹29,000 crore.

“The momentum seen in the last two months of 2022 is likely to continue, at least for the smaller-sized IPOs,” reckons Haldea. However, it may be a while before we see larger-sized deals, he adds.

Meanwhile, for Indian entrepreneurs, both the listed and yet-to-be-listed ones, there is enough sunshine. Reason: India is not going back to the sparse IPO years—eight in 2014-15 and 14 in 2018-19.

“IPOs are here very much to stay,” says Anil Kumar, CEO of Redseer Strategy Consultants. With a renewed sense of discipline and focus on profitability, the Indian new-age companies have the potential to become extremely attractive, large-scale and cash-generating assets. The key, though, is to keep steadily growing on the path of profitability. “Humpty Dumpties can get back again. All they need to show is character,” says the VC.

Tweets by @forbesindia
How pursuit of fitness is helping Asics build its India business
RateGain: India's first listed Saas company may be down from stock market highs but not out