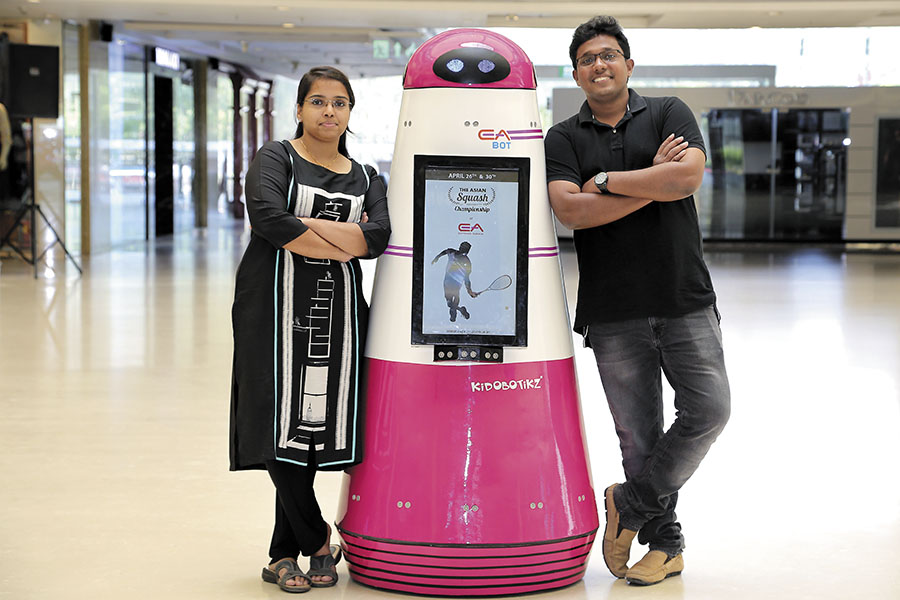 The husband-wife duo of Sneha Priya and S Pranavan were passionate about building robots since their college days
Image: P Ravikumar for Forbes India

Seventeen-year-old Abishek Shankar plans to start a company once he finishes building his robot over the next four months. Currently the third prototype, his robot autonomously collects tennis balls from a court. “I guess this would be a much cheaper alternative compared to paying a ball boy every month. It’s a one-time investment for any tennis academy,” says Abishek, who had taken tennis lessons. “I would spend about 15 minutes of the hour-long class collecting balls and that frustrated me.” That’s how the idea to build a robot came to Abishek, a class 12 student at PSBB School, in KK Nagar, Chennai.

Abishek’s interest in robotics began three years ago when he signed up for a course taught by the husband-wife duo of Sneha Priya and S Pranavan, co-founders of SP Robotic Works. “Four of my friends had joined the course, which is what pushed me to join. But they quit after the third level and I continued,” says Abishek. The 10-level robotics course taught children aged between 11 and 17 years how to build a basic robot. The course included topics related to electronic and mechanical engineering, software programming, and algorithms. It was taught through robotic kits that are designed and developed by the couple. (While Sneha and Pranavan design every product they sell, the different parts are made through contract manufacturing.)

“Education and robotics were our passion and we wanted to do something around that,” says Sneha, 26, an electrical and electronics engineer from Anna University. After graduating in August 2012, she and her batchmate Pranavan, 27, (they got married in 2015) started weekend robotics classes in KK Nagar from a single room in Pranavan’s home. Starting with two students, they went on to teach 500 students by the end of 2015, operating out of a large training centre in KK Nagar. And from initially charging a mere Rs750 per month per student, they raised their fee to Rs2,500 a month. “Curiosity and passion were driving children to sign up,” says Pranavan.

The couple’s student community built a robot called Swachhbot that cleaned Chennai’s Marina Beach in June 2015. This April, their student community in Bengaluru operationalised a food serving robot stationed in the VR Bengaluru mall, while their Chennai unit operationalised a mall-assistant robot at the Express Avenue mall. A few of their students are working on an agribot that would autonomously remove weeds in a farm and eliminate the need for a daily wage labourer.

For fiscal 2013-14, SP Robotic Works earned Rs10 lakh from its educational venture; the following year, its revenue grew to Rs50 lakh, which included ancillary income from the sale of robotic parts and accessories that students can buy to build bigger and advanced robots. In fiscal 2016, its revenue was Rs1 crore. This was the year when Sneha and Pranavan realised that they were on to something big and needed to expand beyond their only physical teaching centre. “We wanted a scaleable and better way of teaching,” says Pranavan. Taking their classes online they thought was their best bet.

By mid-2016, SP Robotic Works’ entire robotics programme, branded as Kidobotikz, moved online to reach a wider audience. Its business model has been tweaked whereby students now have to buy robotic kits priced between Rs5,000 and Rs15,000, and refer to an online video tutorial to build the robot and learn the theoretical concepts. It’s not a typical Lego-style ‘do-it-yourself’ kit, asserts the couple. To build a robot with the Kidobotikz kit, students need to learn various theoretical concepts from the online tutorial, unlike a typical Lego set-up, where they follow an instruction manual.

Since moving online, the company has sold more than 1,500 kits across India, Mauritius, UAE, Singapore and Malaysia. “Twenty years ago, students were keen to learn computers. Now their inclination is towards learning robotics,” says impact investor Nagaraja Prakasam of Indian Angel Network (IAN).

In March 2016, SP Robotic Works raised Rs2 crore in a seed funding round led by IAN and the Chennai Angels, an angel investment group. “By the time they finished college, they had some revenue in the bank, and by the time I met her [Sneha], they had a profitable business. That was impressive,” says Prakasam, who is on the board of the startup. The process of closing a pre-series A round of funding “is aggressively going on”, he adds.

While in college, between 2008 and 2012, building robots was a passion for Sneha and Pranavan. They were in the same class, but didn’t know each other until the end of their first year, when Pranavan had borrowed a robot, built by Sneha, for an inter-collegiate competition. He won, after having lost numerous ones before. From then on, they participated in, and won, multiple inter-collegiate competitions held across the IITs, NIITs, and Bits Pilani, amassing about Rs5 lakh in prize money. At a competition in IIT-Kanpur in 2010, their six-legged robot danced its way to clinch the first prize of Rs70,000.

The education business was only a weekend hobby when they started out in August 2012. They had set up shop to make robots for industrial purposes and went on to build an automated cleaner for AC ducts, and an automated vehicle for transporting goods in warehouses. While these products earned money, their home automation devices weren’t as successful. “A lot of people were interested in our home automation product, but they were looking for big brands. It was a product that was a luxury and not of need. We understood there was no scale for it,” says Sneha.

The pre-series A funding would go towards expanding their product basket, which would include newer kits and online video tutorials based on concepts such as image processing, virtual reality, 3D printing, and Internet of Things. “We want to create an active and intelligent community of engineers and innovators,” says Pranavan. And one way by which they are achieving that is by fostering multiple communities of robot builders. The couple host periodic competitions, including ones with real-life problems that give rise to solutions like the agribot. The best ideas are selected and the students are connected with the company’s team of 14 project managers who assist them in building the robots.

“There is a thought process: Can we patent these robots that would be owned by the students and the company and outsource its production? This could be an additional revenue stream for the company,” says investor Prakasam.

Tweets by @forbesindia
GVK checks out of Bengaluru airport
Team Indus: Aiming for the moon