Team Indus: Aiming for the moon

Rahul Narayan's TeamIndus is in the fray to launch India's first private moonshot. Besides the $20 million-prize money from Google, success could mean heralding a new age of space entrepreneurship in India 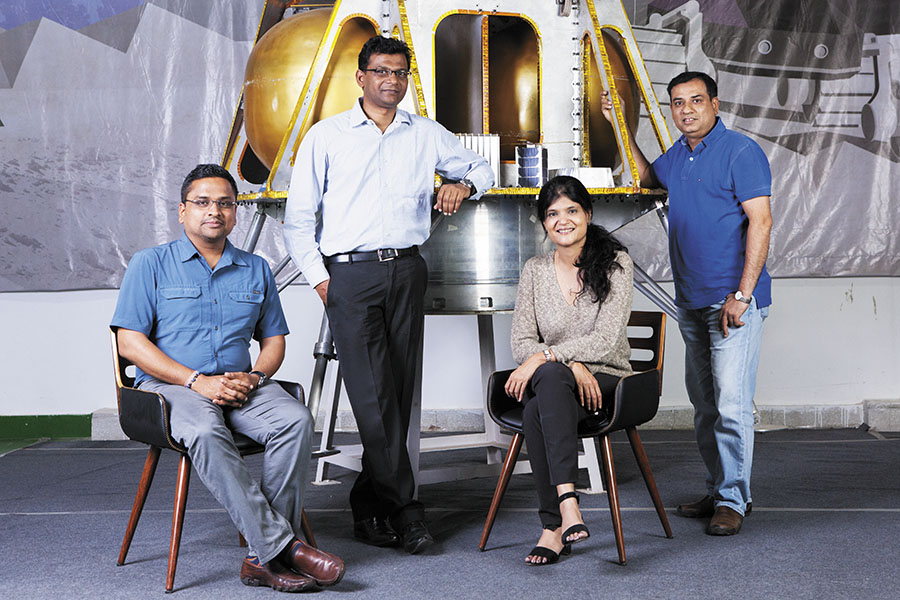 As far as his career was concerned, IIT-Delhi alumnus Rahul Narayan was never a conformist. He loathed the monotony of a conventional work life and wanted to pursue “something larger than the goals of a regular job”. So, in 2010, when he decided to wrap up his three-year stint at Agnicient Technologies—where he was COO—to compete in the Google Lunar XPRIZE, he had no qualms in doing so.

The Google-sponsored Lunar XPRIZE carries a $20 million (Rs 129 crore) reward for the first privately-funded team that successfully soft-lands a spacecraft and manoeuvres for 500 metres a moon rover; the rover must also beam high definition images and videos back to the earth from the lunar surface—a feat not attempted even by the celebrated space agency, Indian Space Research Organisation. (Isro’s 2008 Moon Impact Probe, part of the Chandrayaan-1 mission, did not have a soft landing—it crashed, as planned, on the moon’s surface.)

The complexity of the mission is enormous, yet Narayan decided “it’s now or never”. After doing some initial work on the space mission from Delhi, he shifted to tech town Bengaluru in 2011 to start Axiom Research Labs, the company behind TeamIndus, which is currently one of the five finalists, and the only one from India, in the fray for the Lunar XPRIZE. The other finalists are Israel’s SpaceIL, the US’s Moon Express, Japan’s Hakuto and Synergy Moon, which is an international collaboration.

“The genesis [of the project] was to be a part of something bigger than what we do in our daily lives. This looked like something exciting, a target big enough to pursue,” says Narayan, 43, CEO of Axiom Research Labs and Fleet Commander at TeamIndus, which has Star Wars-based designations. TeamIndus was the last to register for the contest, in 2010, three years after the prize was announced.

Seven years, and about $25 million in funding later, it is just months away from launching the first Indian private spacecraft to the moon. On December 28, 2017, riding on Isro’s Polar Satellite Launch Vehicle (PSLV), the team’s spacecraft will commence its roughly 380,000 km, month-long journey that will hopefully end in an Apollo moment.

Success would mean more than a private company delivering on a ‘programme-level’ space project. (Shorn of jargon, this means that TeamIndus itself has defined the mission objective and will design, build and execute it against the usual practice of private companies building something to meet Isro’s specifications.) It could herald an age where startup-style entrepreneurs—like Elon Musk and Jeff Bezos in the US—enter India’s spacefaring efforts, ending Isro’s monopoly.

“What they are doing is encouraging. If they successfully [soft] land their spacecraft on the moon, they will be beating Isro to it,” points out Gopal Raj, a journalist and space historian, who chronicled Isro’s story in his book Reach for the Stars. “It will give the idea of Indian private enterprise in the space sector a lot of credibility,” he tells Forbes India in a phone interview. 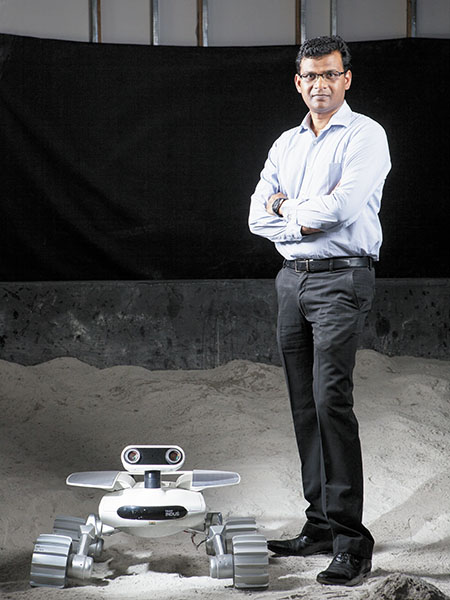 The journey to the moon, however, is fraught with challenges. Placing a 600 kg-spacecraft into a lunar orbit and eventually staging a controlled, gentle landing on the moon’s surface is no mean feat. Adding to the stakes are the payloads TeamIndus’s spacecraft will be carrying. This includes a rover built by Hakuto, its Japanese competitor for the XPRIZE, besides a clutch of experimental apparatus. The contracts the company has inked to carry the payloads translate into revenues for TeamIndus, but if the mission goes awry, it will hurt the prospects of the clients as well.

To face these challenges, TeamIndus has put together a formidable effort, says Narayan. “We are more sure about ourselves, we know a lot of the things that need to fall in place. This is a programme we started from scratch less than seven years ago; and for less than $70 million (Rs451 crore) if we’re able to land a spacecraft on the moon, it would be a defining moment.” For points of comparison, Isro’s 2008 Chandrayaan-1 mission cost about $80 million Rs 515 crore).

Narayan says the initial inspiration for TeamIndus was the Ansari XPRIZE in 2004, to launch a spacefaring vehicle. “I ardently followed it,” Narayan recalls. Not confident of himself then, he waited for a more opportune time and when the Lunar XPRIZE was announced, Narayan got his eureka moment.

The stories of competitors in the Google XPRIZE were inspiring, he says—among them was a father-son team, a lone ranger and a Carnegie Mellon University professor. “If so many different teams and groups were aiming for the prize, why couldn’t we do it out of India, too?” Narayan wondered. “It felt like it was the right time in India, the right place and maybe we were the right kind of people to chase it.”

For a long time, TeamIndus was Axiom Research’s sole focus. In the last year, however, the team has been identifying new avenues to apply its learnings from the moon mission, which could eventually help commercialise some of the capabilities Axiom has built. Landing a spacecraft on the moon itself could become a viable business proposition in the future.

Possibilities like these underpin the economics of investing in private space enterprises. It also explains why TeamIndus is spending $70 million on the $20 million Lunar XPRIZE—the latter is just the icing on the cake, not the ultimate goal.

TeamIndus is not the first private company to show interest in the space industry. In the last 30-35 years, private vendors—Godrej, L&T and Walchandnagar Industries to name a few—have contributed by manufacturing various components that go into a space mission, says Narayan. The difference then is that “we see ourselves at a programme level as opposed to the sub-contractor level,” says Narayan. “If you look at Nasa’s Mars rover programme, it’s completely outsourced to Lockheed Martin that takes the specifications and builds the rovers. Learnings that come out of it belong to Nasa. And Nasa, with its scientists, becomes a scientific organisation whereas the industry handles the engineering.”

This model will be at the heart of how TeamIndus eventually becomes commercially viable, says Narayan. By entering the ecosystem at a higher value-addition level, it wants to become a programme manager and a system integrator for large organisations such as Isro, and some day possibly for agencies like Nasa. “We see ourselves as an aerospace startup. It’s a long-gestation industry,” says Narayan. The capabilities that TeamIndus has acquired today, and the ones it is building, are much sought-after in the global space industry. It is “imminent” that the Bengaluru venture will be able to team up with other space agencies and private players in the future. TeamIndus is also building its own integration facility, where it will assemble its spacecraft, in Bengaluru.

But even as it gets future-ready, TeamIndus has to be mindful of the costs, given that it is a commercial entity. To cap expenses on the moon mission, “many redundancies have been done away with,” says N Srinivasa Hegde, mission director for TeamIndus, who served in the same capacity for Isro’s Chandrayaan-1 project. “Here you have to be frugal in design and content, and actions have to be justified economically.” For instance, the spacecraft’s ‘reaction wheel’, which helps to orient it in a particular direction, has been removed because it adds to the weight and power. Getting the spacecraft to point in a given direction now relies on complex software that will fire the spacecraft’s thrusters. 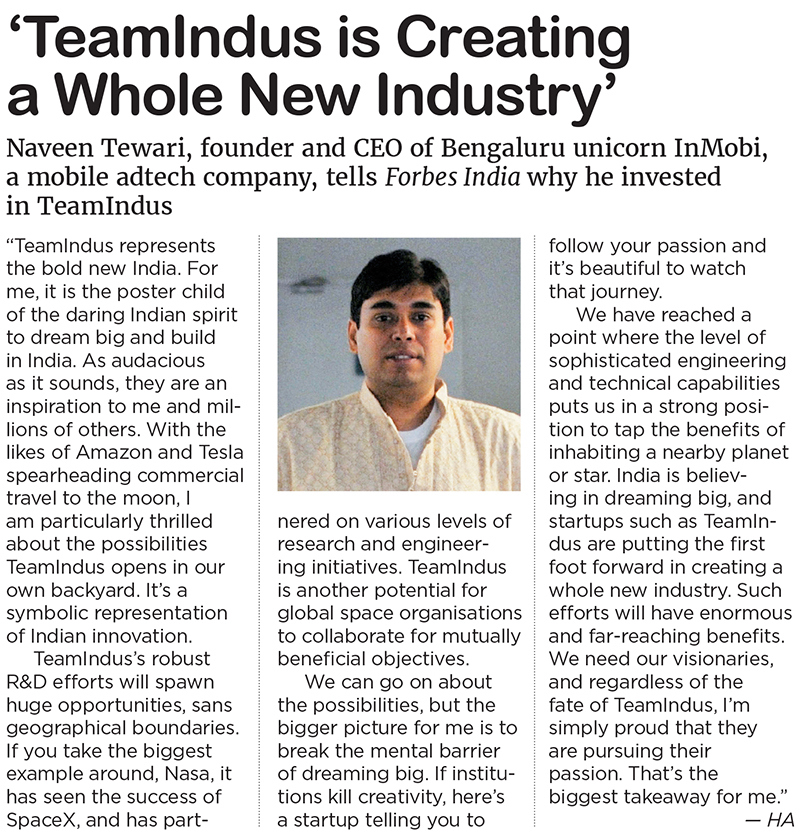 Assembling the hardware on time is another real challenge, and “in the space industry, [a delay in making] just one component can delay the entire mission,” adds Hegde. Growth at TeamIndus has also only been possible inorganically, buying whatever could be bought and assembling it.

The technical challenges apart, TeamIndus also faces a manpower problem. Apart from the two dozen-odd retired Isro scientists and engineers among its 100-strong team, most of the young people at TeamIndus have not even seen a spacecraft. “They are doing so through our eyes,” says Hegde, which means he and the other Isro mentors had to distil their collective experience into their younger colleagues, with an average age of 26. Each senior member leads a team of four to 12 younger staffers in multiple sub-disciplines. Together they are able to design, analyse and prototype in-house.

Narayan sums it up: “The idea is that we should be able to take a simple problem statement—land on the moon, cover 500 metres and beam images and videos to the earth—and over seven years, figure out everything else that needs to go into it.”

The company was relatively inefficient this time, he admits, as it was the first attempt. But the experience TeamIndus has gained and the team it has weaved together could become a strong business proposition.

And there are many business opportunities that are emerging. “Space has moved to new services that are really novel,” says Narayan Prasad, CEO of Bengaluru-based Dhruva Space, a private venture building satellites. There are many new services—Internet of Things, automatic identification of ships, aircraft tracking and GPS radio occultation for weather prediction—being built on satellite systems that have evolved over the last 10 years, he says.

Such services, however, don’t feature in India’s road map yet, as Isro has its own government-approved mandate. The space agency has its hands full with work, including building some 70 satellites over the next five years.

The time is ripe for the private industry to step in, pick up the slack and tap the opportunity. What is needed is a policy framework on how companies such as TeamIndus and Dhruva can be integrated into the country’s space policy, says Prasad.

Narayan echos this view: “I see space as infrastructure, not simply as glory for the country.” He points out that space-based infrastructure is already a significant part of our lives. “We just don’t notice it. GPS, television broadcasting, big chunks of mobile networks and weather forecast are all dependent on satellites.” Beaming internet down to earth is seen as increasingly viable, and TeamIndus sees itself as a potential engineering vendor to help put up the complex network of ground stations, satellites and so on.

Narayan sees himself and TeamIndus as “partners” to agencies such as Isro, Nasa as well as the larger established multi-billion-dollar private aerospace companies in the US, in the global $300 billion-space industry. The aim is to usher in the “next wave of what needs to happen in space, with space”.

Clearly, the company’s raison d’etre stretches beyond the moon mission it is now pursuing.

Tweets by @forbes_india
Robo-in-the-box
Why do some innovations stick? Quite simply, because they're better