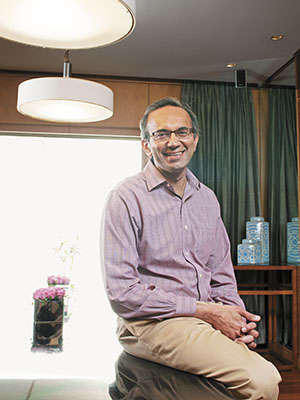 The Start-up India campaign announced amid much fanfare on January 16 this year outlined the government’s resolve to enable entrepreneurship in India. A precursor to the big announcement, however, was the submission of a report by the Expert Committee on Innovation and Entrepreneurship, commissioned by the Niti Aayog. It was helmed by Tarun Khanna, the Jorge Paulo Lemann Professor at the Harvard Business School and the director of South Asia Institute at the Harvard University. The committee’s recommendations have since helped shape the contours of the Atal Innovation Mission (AIM). Khanna, who is also part of the founding team at Bengaluru-based Axilor Ventures, spoke to Forbes India about the need to create an ecosystem conducive to innovation and why it’s worth taking a chance to encourage the state to start doing basic stuff. Edited excerpts:

Q. Are Indian startups doing enough to solve India’s more pressing problems?
Absolutely not (laughs). I think we’re doing very exciting things. But it would be overstating it to say that we’re solving India’s problems. We’re addressing some of the low-hanging fruit; things that are easier to address. We’re addressing things that appropriately build on India’s stock of knowledge assets, primary among which is our expertise in software and information technology. It makes a lot of sense. I have no issue with that. It has generated some jobs and put India on the map. But it’s not enough.

We have many systemic issues. For me, the three primary spaces that need infinitely more attention are health care, education and agriculture. In all these cases, the catch is that it’s very difficult for a lone entrepreneur or a lone entrepreneurial team to dream up the solutions and try to address them. Their effectiveness is going to be constrained by a lack of other supporting infrastructure. So to expect them to solve a tough problem plus create the enabling conditions around it for that to happen is a Sisyphean task.

Q. With regard to the role of the state, do we need to draw a line between enablement and interference?
I suppose in India we worry about the state interfering, coming from a history of socialism and how we used to think of the role of the state. But I feel in this instance, the issue of interference doesn’t arise. There are two kinds of errors we might make. We might not have the state do anything for fear that it might unproductively intervene. That’s where we are right now. Or we might have it intervene to do a lot of productive things and accidentally do a few things that are not productive. I feel it’s worth taking the chance and encouraging the state to start doing some pretty basic stuff. High on the list for me would be genuine research and development credit that in effect subsidises true entrepreneurial effort or provides a floor to the risk that the investors are taking. The second thing is that the state has to be an enabler of basic science. We’re certainly very intellectually handicapped. We’re not even willing, in the university system, to say that we are handicapped. That’s a real concern.

Q. What do you make of the Start-up India campaign?
I was involved with this expert committee with the Niti Aayog. It created an intellectual framework for how the state should enable the actions of the private sector. Now, there’s a formal structure called the AIM within the Niti Aayog that’s meant to be the catalyst to do this. But we’ll have to hold the Niti Aayog’s feet to the fire for them to actually implement it. The pieces are all there. We have the blueprint and 90 percent of it is uncontroversial. It’s up to the state and the machinery to enable change.

Q. Do you think startups should be incentivised to get them to start looking at some of India’s larger problems?
Let me make up a stylised example. Suppose there’s some issue with a particular crop. Say that it’s attacked by a certain kind of disease. What if one of our universities would have a lab attached to it, a sort of tinkering space, where agricultural scientists could play around for free and own the intellectual property? In principle, there should be some places where we can do this. Some people are motivated by money and I have no problem with that, but most people who end up being good entrepreneurs are puzzle solvers and curious guys. If you just make it easy for them, they will do it. We just need to create those little play areas across the country. I’m thinking 5,000 tinkering labs all over the country.

Q. You’ve written about the role that universities can play to enable India’s development. How would that ideally play out?
There are many ways. But two big buckets, just to offer a general conceptual answer. One bucket would be to create conditions where addressing practical problems is rewarded in the academic structure, which is currently not the case. Currently what is rewarded is talking heads standing up and lecturing, and not necessarily doing a great job at that. But if one could offer some inducements to academics and students to get involved in practical things, maybe give them credit, that’s one thing universities could do. There’s not a sharp dichotomy between thinking and studying on the one hand, and doing on the other.

Getting your hands dirty on practical problems is a useful thing. That’s one. Second I would say is to really encourage the liberal arts. We do a horrible job at that and it’s getting worse. There is nothing more fundamental to creative problem-solving than having a broad spectrum view of the world. You don’t get that unless you are exposed to many forms of human endeavour and we absolutely don’t value that. We don’t value most things other than purely vocational education. That’s got to change. Humanities seem really distant from startups, but they’re not.