Musings on the FIFA World Cup 2022, Qatar, controversies and the David versus Goliath narratives which played out on and off the pitch 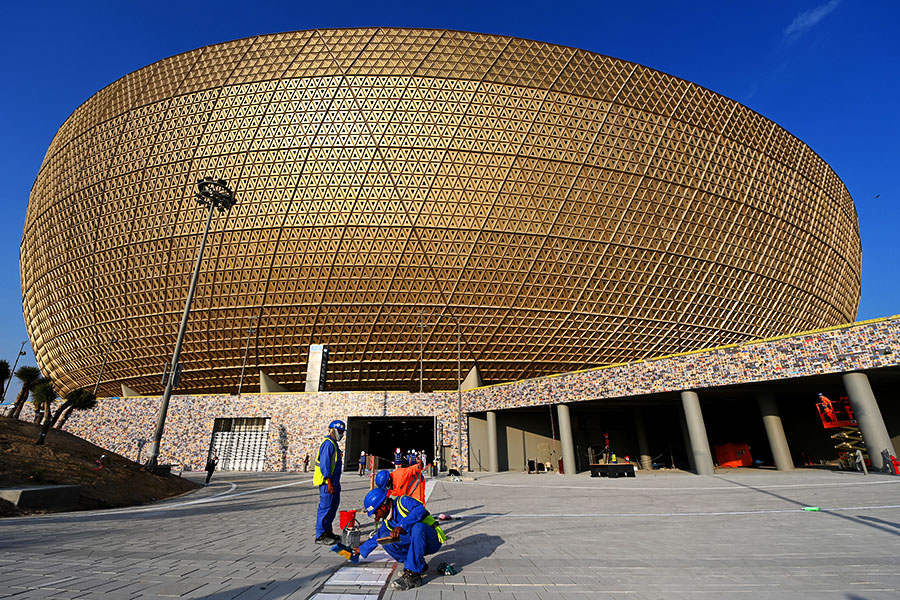 A general view outside the Lusail Stadium for the 2022 FIFA World Cup. Image: Shaun Botterill/Getty Images

“Boys, we have our hopes up again, I want to win the third, I want to be world champion,” so goes the song, which was chanted by thousands of fans on Tuesday, December 13, 2022, when Argentina beat Croatia 3-0.

So were 89,995 other fans. Almost everyone who was not from Croatia was supporting Argentina. The song was being sung so loudly that it almost made me worry about the structural integrity of the majestic and massive Lusail stadium. My fourteen-year-old son raced across the city the very day we arrived to buy the Argentina jersey and flag. Though at the match venue flags were being handed out free, the trek was well worth it. It was the spirit that mattered. It was the vibe that was infectious.

What a magnificent tournament it has been. Qatar has been an example to the world in actual program management since kick off. An exemplary and meticulous attention to detail, flawless service and infrastructure like no other place I have seen. And I have been around the world a bit myself.

I spent more than four and a half years as CMO at Star Sports in its formative years and I thought I had seen it all from the ICC ODI and T20 world cup tournaments to the grand slams. But there is nothing like what I saw at the FIFA semi-finals. The feeling was electric. On the days we were there, the city was blue (Argentina) and Red (Morocco).

Ghana, Senegal, Cameroon and Morocco have lifted Africa high and above the relegated positions on the long list. Seeing Sofiane Boufal dancing with his mother on the pitch, after the team’s quarter-final triumph was a priceless moment. Quite another thing altogether was the tribal solidarity of the fans. The Argentinian fans are another subspecies of high energy homo sapiens.

In 2010, when Sepp Blatter opened the envelope and said “Qatar”, accusations of corruption and bribery made matters muddy if not murky right thereafter. A report commissioned by FIFA , eventually published in 2014, cleared Qatar’s bid. Their Ethics committee is known to be rigorous and several independent investigating authorities were in the mix, including the FBI. No evidence has been established of any bribery as a matter of fact. For the traditional bastions of world football, it was a shock. The very first edition of the tournament to be held in the Middle East, it has done much to mark the ascendency of the global South in football. I can imagine some of the insinuations being provoked thus.Also see a Photo essay: Mizoram and its unparalleled passion for football

Qatar has excelled in execution. It has spent like no one else before has done. The eight stadia, airport, swanky new hotels and a state-of-the-art metro are evidence of its commitment in brick and mortar. A million tourists have made the pilgrimage and two million room nights have been signed in. We had to wait 45 minutes to get a traditional Arab breakfast platter at a restaurant in Souk Waqif. The malls are bigger than the stadiums and almost as crowded. The road traffic is superbly disciplined. You cannot walk 10 steps without finding a uniformed person on duty to assist visiting fans. Doha is spotlessly clean. In every sense, they have excelled at organisation. They have come out with flying colours.

The year 2021 saw a bolt of lightning that appeared with shock and awe and then disappeared. It was the ‘European Super League’ wherein elite clubs would run their own tourney. Not different in spirit from say, a Super Bowl in American football. The Qatari Royals themselves own the Paris St-Germain team and other clubs. It is eminently possible that not one, but many tournaments may be born to compete with the World Cup. We shall see what happens but for now there is but one world cup mundiyal indeed.

It has taken the highest investment in FIFA history to do what Qatar pulled off. The stadiums took $6.5 billion and armies of migrant workers to complete. ‘Al-Bayt’ is designed like a Bedouin tent, ‘stadium 974’ has 974 recycled containers and is named after the ISD code for Qatar. Lusail is extraordinary and - in my opinion - beats the Bird’s nest of Beijing Olympics fame. Estimates on overall spending go as high as $200 billion. Much of the economic development plan called ‘Qatar 2030’ was on the substrate of infrastructure development to serve the needs of this world cup.

The tournament featured 32 teams, its highest count. The 2026 event, to be hosted by America, Canada and Mexico, will feature 48 in all. The federated structure of the FIFA means that revenues must flow to multiple country federations. For the first time in the tournament's history, teams from every continent were represented in the Round of 16.

This tournament has had major and dramatic reversals. Morocco was the beating heart of every Arab and African I met in Qatar. They bested Belgium, Spain and Portugal. It does not get bigger than that. That they took on their colonial masters in the second semi-finals, the first African nation to reach that stage is now history. Saudi Arabia beat Argentina. Australia beat Denmark. Japan beat Germany and then Spain. These are major disruptions. The so-called ‘weaker’ teams beat the established giants. The David and Goliath story in its essence was played out on Qatari soil.

The FIFA president described the current 2022 World Cup as the 'best in history' after the group matches and the Round of 16, with record attendance and television viewing figures around the world. "I have seen all the matches, in fact, and to put it very simply and clearly, this has been the best group stage of a World Cup. The matches have been of great, great quality in great stadiums, we already knew that. However, on top of that, the crowds have been incredible. More than 51,000 fans on average. We have more than two billion spectators, which is really incredible. Two and a half million people on the streets of Doha and a few hundred thousand every day in the stadiums, all together, cheering together, supporting their teams, a fantastic atmosphere, great goals, incredible excitement and surprises."Also read: Handshakes, shoes, and coffee cups: Qatar etiquette essentials for 2022 FIFA World Cup visitors

A word about the sponsors. The visibility was high impact but in a typical sponsor gallery style line up. The integration of sponsor merchandise in stadiums was great. Curio shops gave you blue Visa bags to carry your purchases. Coca-Cola came in specially marked plastic glasses that fans took away as souvenirs. Byju’s was not manifest in tangible ways (Qatari schools are off this month!)

In conclusion, the two and a half days we spent there as a family were very rewarding. As an experience, it was a memory of a lifetime. As a marketer, I saw an end-to-end attention to detail, focus and singularity of intent. They followed the dictum – do well that which matters to your customers - to near perfection. Infrastructure and wealth exist elsewhere too. But the way Qatar managed to bring it together gave another meaning to its national brand identity.

More than the eventual FIFA world cup champion, it is Qatar that has emerged a true winner.

Tweets by @forbesindia
Click refresh: 22 key events for 2022
Neeraj Chopra and his journey to becoming an all-time great