Throwback: Wah Taj! The iconic ad campaign about the effort that leads to perfection

The famous television commercial featuring Ustad Zakir Hussain portrayed the perfection in playing the tabla as the result of hours of dedicated work, just like the work of a master tea blender 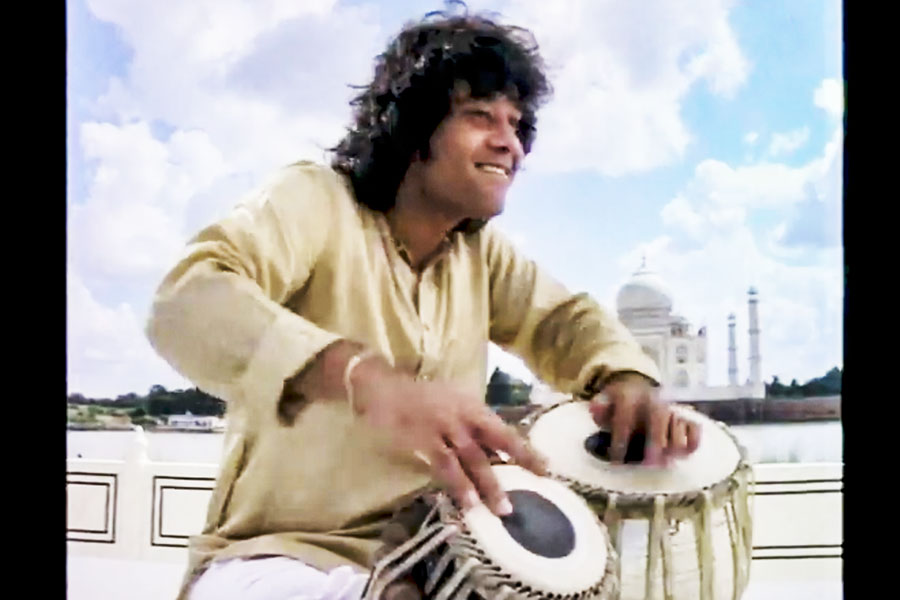 Ustad Zakir Hussain, was seen as having the right mix of Indianness and talent. He also had a persona apart from his talent. And so he became the choice for the new ad campaign for Taj Mahal Tea.

Grey clouds darken the sky, cool drops of rain splatter against the window, and one gets an unmistakable whiff of wet earth. It is at times like this that one wishes to sit back, watch the rain, nestling a cup of hot tea (and maybe munch on a few pakodas, too). Monsoon and sips of hot tea…..magical!

Brooke Bond Taj Mahal Tea was launched in 1966 in Kolkata. It was a premium tea brand, made from the finest leaves, promising a superior tea drinking experience.

Taj Mahal Tea was seen to be for the upper crust, having a strong western influence. Mornings were considered incomplete without a cup of Taj Mahal Tea. Models like Malavika Tiwari appeared cycling and doing aerobics in advertising to emphasize an elite lifestyle. The advertisement ended with the model exclaiming “Ah Taj”.

The company decided to relaunch this product when it realised that a larger group of consumers, the aspirational middle class, also liked this tea. It was seen as a “western” brand and now had to communicate with a larger Indian audience.

Research revealed that three parameters were very important for a tea connoisseur: colour, smell, and taste. The team at the advertising agency, Hindustan Thompson Associates (HTA), researched how tea was processed. They realised that a tea taster, an individual who specialised in matching these three parameters, was crucial to the process. The communication to the consumers had to reflect that Taj Mahal Tea lived up to these parameters to provide a fine cup of tea.

HTA had to create advertising that appealed to the middle class while maintaining exclusive imagery. Dhiren Chaddha, as the strategic planner, wanted refinement and Indianness in the television commercial. Sumantra Ghosal was the producer of the commercial film.Also read: Throwback: How Pan Parag was positioned as a social product

KS Chakravarthy (Chax), the copywriter, liked the musical instrument, the tabla. The tabla maestro, one of the stars of Indian classical music, Ustad Zakir Hussain, was seen as having the right mix of Indianness and talent. He also had a persona apart from his talent. And so he became the choice for the new ad campaign. Interestingly, Ustad Zakir Hussain lived in San Francisco then and flew to Mumbai and then Agra for the shooting of the Taj Mahal Tea commercial film.

With the magnificent Taj as the backdrop, Ustad Zakir Hussain was shown immersed in playing the tabla. Later he sipped on a cup of Taj tea. The voiceover complimented his playing with “Wah Ustad, wah!”. And the Ustad replied, “Arre huzoor, wah Taj boliye!” The television commercial portrayed the perfection in playing the tabla as the result of hours of dedicated work, just like the work of a master tea blender. The beautiful Taj Mahal in the background was unique and an example of perfection too. The voiceover was of Harish Bhimani.

The image of Ustad Zakir Hussain’s skilful rendering of a composition on the tabla, his energetic head movements shaking his curly locks and a spontaneous smile, captivated the audience. The commercial was able to strike a balance between Indianness and refinement and created consumer appeal.
In an era when not many had seen Ustad Zakir Hussain (they might have only heard him play on the radio or knew of him from newspapers), this commercial also made him a household name. Even air hostesses began recognising him on flights.

The idea of achieving perfection through dedicated effort, whether it was the construction of the Taj in Agra or the musical expertise of maestros such as Ustad Zakir Hussain, or the tea crafted by master blenders was carried forward in subsequent advertising, too. Later television commercials have featured other classical maestros such as Pt. Niladri Kumar on the sitar and Pt. Rahul Sharma on the santoor.Also read: Throwback: 'No one wants to lick line drawings, put real ice cream' - ad guru Mohammed

Subodh Tagare is an Associate Professor at IMT Nagpur, where he teaches courses on marketing. Before IMT, Subodh was the marketing director at American Power Conversion/ Schneider Electric for South Asia.
S Vejay Anand consults with organisations on business strategy and marketing. He has also been an entrepreneur in the food and pet care spaces. Earlier he was President at Coffee Day and COO at USPL.