Common University Entrance Test (CUET): How the entrance exam becomes a hurdle for students and an opportunity for edtech platforms

The common entrance test aims to standardise college admissions across the country, but is plagued with teething troubles that are affecting students 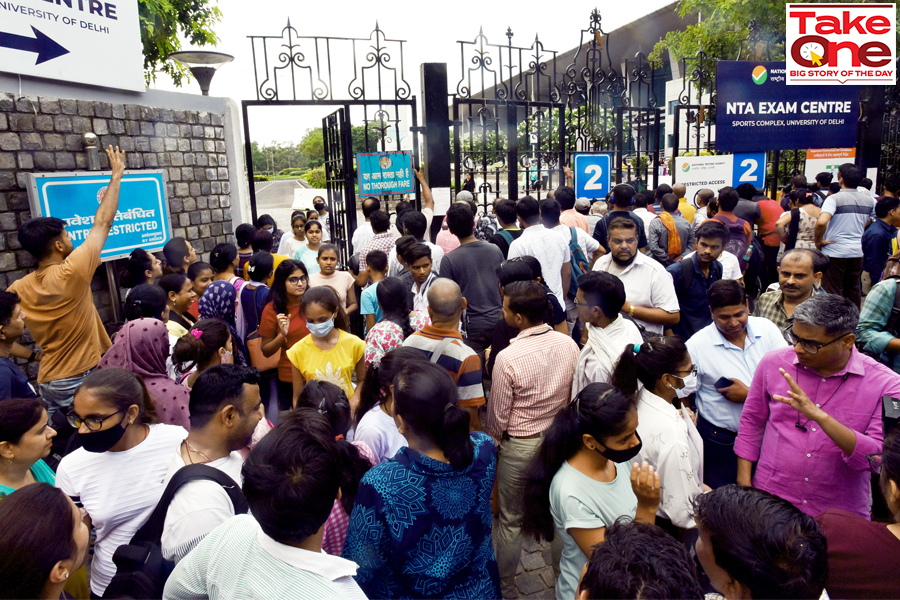 Students after appearing for the Common University Entrance Test-Undergraduate (CUET UG 2022), in the first slot, at North Campus, on July 15, 2022 in New Delhi, India. With 14.9 lakh registrations, the CUET, is now the second biggest entrance exam in the country, surpassing JEEMain's Image: Sonu Mehta/Hindustan Times via Getty Images

The senior secondary school years are stressful and crucial for students, as they not only have to prepare for their board exams, but also think about gaining admission to colleges. Lately, the process has been more difficult than usual, with the Covid-19 pandemic bringing multiple obstacles and changes in evaluation patterns.

Till 2021, admissions to central, state, and private universities were largely based on merit, with a few exceptions. However, the National Testing Agency (NTA), in March 2022, introduced the Common University Entrance Test (CUET), a standardised test for admission to undergraduate and postgraduate courses, diplomas, certification courses, and research programmes. CUET-UG is for admission to undergraduate courses in 90 universities, including 21 private and 12 state universities for the academic year 2022-23.

With 14.9 lakh registrations in its introductory year, CUET-UG has become India's second-biggest examination, surpassing the JEE-Main’s average registration of 9 lakh over the past five years. While CUET eliminates the limitations of merit-based admissions for students from different boards, so far it hasn’t been a smooth ride for students.

CUET is being conducted in six phases—between July 15 and August 31—five of which are over. But students who have taken the exam are unsatisfied, because of multiple last-minute changes to test centres and timings, lack of clarity on the examination pattern, technical glitches reducing the time available to students, and a looming uncertainty of how and when the admission process will end and the academic year begin.

“I was informed of the test centre being changed, from Panvel to Raigarh [in Maharashtra], a day before the exam; it increased my commute time by an hour, and added to the nervousness,” says Nitant Kaushik, 18, a resident of Mumbai, who is seeking admission to Delhi University.

Under CUET, NTA offers 27 domain-specific subjects and 33 languages, from which a candidate can choose a maximum of nine subjects, according to their preference for college and course. This spectrum of options had created over 45,000 unique subject combinations.

CUET creates fresh opportunities for edtech players and offline coaching centres to tap into a larger student base. Edtech platforms have introduced new courses specific to CUET preparations and have seen a rise in enrolment of students. “Almost everyone I know who has been preparing for CUET has enrolled for one or the other online CUET preparation courses because this is the first year of aptitude-based entrance exams, which we aren’t used to,” says Kaushik.

“CUET will add to the coaching culture in India; many students will bank on coaching centres and online platforms for preparation,” says Girish Kumar, principal of Apeejay School, Jalandhar.

CUET has delayed the admission process by months—usually, college classes begin between June and July—leading many aspirants to give up on their preferred choice of college. “I wanted to get into Delhi University, but since we still don’t know when the admission process will be completed, my parents didn’t want me to wait and instead join a college that took admission based on Class 12 results,” says Sidharth Chopra, an 18-year old who enrolled in APJ College of Science and Commerce in Jalandhar after taking the CUET on July 18. “NTA organises some of the most difficult exams in the country, like JEE and NEET, and yet there have been so many problems with CUET. With such complications this year, the current batch is losing out on opportunities to get enrolled in their preferred colleges.” 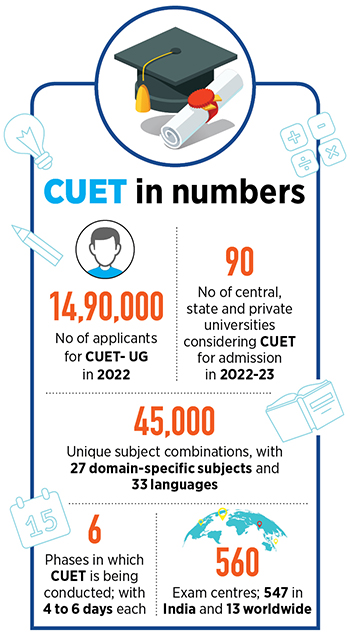 Sehaj Chabbra also ended up enrolling in a private university with merit-based admission despite taking the CUET. “My parents were getting anxious; they didn’t want me to have a gap of some months in my education. In my college, classes have started, and by the time admissions through CUET will be completed, we would have covered half the syllabus for the first semester,” says Chabbra who enrolled for bachelor's in commerce at DAV College, Amritsar.

Anil Nagar, founder and CEO, of Adda247, an entrance test preparation platform, says that of the 14.9 lakh CUET applicants, more than 2.1 lakh are enrolled with Adda247. “The anxiety and panic among students is high at the moment. Most of their grievances are genuine. Ideally, board exams should be over by March and CUET should be conducted from April to July for a smoother conduct,” he says. “However, we have to acknowledge that an exam of this scale and complexity has been a mammoth task for NTA.”

Also read: How we ended up with seventy-five years of unequal education

The introduction of CUET is set to have a two-fold impact: It will reduce the significance of Class 12 board exams, while increasing the dependence on coaching classes for preparing for the common entrance test.

“After the introduction of NEET and JEE, medical and engineering aspirants started focussing more on competitive exams rather than board exams. The same thing is likely to happen with CUET,” says Anish Kulkarni, who consults students on under-graduation and post-graduation admissions.

“The goal of CUET is to remove the disparity between students from different boards, reduce the hassle of multiple examinations and bias in evaluations, while testing students on fundamental skills and concepts,” says Venkat Phanikiran, chief academic officer, Extramarks Education, an edtech platform. “Board examinations are comprehensive, while objective examinations are aligned towards quick problem-solving skills. Board examinations might become completely redundant for admission to colleges if the admission criterion is solely CUET results.”

This is already being reflected in the high number of enrolments for CUET coaching. “There is a high demand for CUET courses amongst Class 12 students across various boards. We have seen 100 percent growth for our K12 segment business since CUET introduction,” says Nagar of Adda 247.

“CUET has been a new addition to our product portfolio in the last four to five months, and that has shown attractive numbers in the first quarter,” says Nikhil Mahajan, executive director and group CEO, Career Launcher, a coaching platform for competitive exams. “As the exam gets accepted by a wide gamut of universities and institutions, it becomes a big market opportunity over the next three to five years. CUET in three years will probably become one of the biggest exams in India. With about 15 lakh students registering for the first edition, we expect the number to grow to between 70 and 80 lakh in three to five years.”

The number of students who are likely to take the CUET in future is only set to increase exponentially, if the Universities Grants Commission’s (UGC) recent proposal to merge it with NEET and JEE Mains is implemented. In 2021, nearly 16 lakh students applied for NEET, for admission to medical courses, with around 83,000 MBBS seats, and 27,000 BDS seats, while more than 22 lakh students applied for IIT-JEE examination, for nearly 16,000 seats in the Indian Institutes of Technologies.

“JEE and NEET account for nearly 38 to 40 lakh aspirants. With the government considering merging JEE and NEET with CUET, the landscape would change rapidly. The number of universities depending on CUET is expected to double in 2023, and with the proposal to merge more exams with CUET, we could reach an enrolment count of 5 to 6 million in a few years,” says Mahajan.

The road ahead for CUET

The ability of common entrance tests to assess the aptitude of students with different skill sets and from different boards is up for scrutiny. “Bringing them all together on a singular platform raises questions of equitable opportunities,” says Phanikiran. “But we must understand that getting into college, irrespective of background, requires some fundamental skills; this applies to both undergraduate and postgraduate courses. Having one pan-national examination also reduces the stress that students face of having to take multiple exams for different universities.”

Following complaints of glitches in the conduct of CUET, NTA is considering changes for next year’s exam. These include a reduction in the number of subject combinations on offer, and reviewing the number of cities where exams are conducted.

“There are multiple ways in which CUET can pan out. It might become the pan-national school leaving or college selection examination, like the Gaokao in China or the Suneung in South Korea,” says Phanikiran.

“One nation, one exam; that’s the philosophy with which CUET was envisaged,” says Mahajan. “It is likely to be the only entrance test for all undergraduate and postgraduate courses, like SAT in the US. There are aspects of the exam that can be handled better, including design elements like pattern and structure. However, the intent is clear, and CUET should have a promising future.”