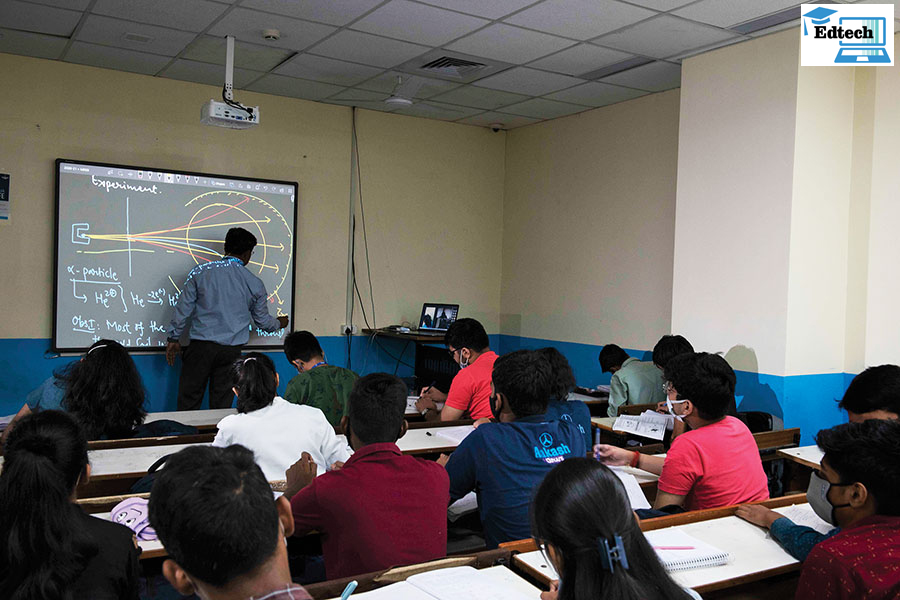 A faculty member teaching chemistry with the help of a smart board at Aakash Institute’s Janakpuri branch in New Delhi Image: Amit Verma

The last two years have been challenging for the education sector. The shift to online education, a rather unfamiliar domain, led the population of ~430 million students between the age group of six and 23, staring at a blank canvas. The challenge, however, became an opportunity for the sector that has seen massive revenue growth by creating sustainable, impactful solutions that seem here to stay.

But as schools and colleges reopen, many edtech startups are witnessing a decline in revenue growth. The challenge now is to figure out the best medium to grow while not compromising on the online-first approach.

As a result, most major edtech unicorns in India are considering going hybrid—having an online and offline presence. Byju’s, for instance, acquired Aakash Educational Services Limited for $950 million in April 2021 to leverage the brand’s offline market share. Aakash institutes operated on ground before the pandemic and went online during the lockdowns. “We’ve figured out how to get the best of both worlds. Our classes are hybrid. We let the children choose whether they want to be in-class, in-person or join the same session via Zoom,” says Abhishek Maheshwari, CEO, Aakash Educational Services Limited, which provides coaching for competitive exams.

The institute live-telecasts and records every class while the teacher teaches in the classroom. “Our teachers are our biggest resource and our students value that. But geographical and other constraints might hamper a child’s ability to be taught by them. Our model lets children even in remote places be taught by the best teachers,” says Maheshwari.

Aakash has more than two lakh students enrolled in its centres and plans to reach close to four lakh with its hybrid strategy. It plans to expand its centres from 285 to 500 by 2023. “Having to deal with school syllabus along with test prep material, the kids can choose to be in class every day or alternatively or come for doubt sessions only,” says Maheshwari. “The blend of online and offline makes us pandemic- and crisis-proof.”

While trying to focus on profitability, consolidation and cost-cutting, these online-first edtech unicorns are figuring out how to best fit in the post-pandemic world where physical interactions are preferred by students, teachers and parents alike.

A study by KPMG and Google has found that nearly one-third online learners believe online education does not substitute traditional learning due to a lack of interaction with peers and instructors. Low completion rates of online certification courses due to lack of feedback and interactions further underline the need to have multiple models.

“There is no doubt that in-person education has its perks. Children learn discipline, become competitive with their peers, build student-teacher relationships and develop social skills,” says Vamsi Krishna, CEO and co-founder of Vedantu. “Similarly, online education has its perks, convenience, saving time and energy on travel, bridging the geographical student-teacher gap, etc.”

After two years of booming revenue and growing student adoption, edtech startups are now seeing a decline in funding and subscription levels because of the fall in demand for online education. The country’s edtech market, which as per estimates, has breached $3.5 billion in market size, is going through a tumultuous period with growth-stage capital drying up, forcing many to either shut shop or cut back on jobs. This is forcing the startups to change their strategy.

Vedantu plans to open physical centres while maintaining the online-first approach. The unicorn, which has the proposition of bridging the geographical divide between quality educators and children based in remote locations, raised $100 million at a valuation of $1 billion in September 2021. It is betting big on innovation in the area of live online learning. It launched WAVE (Whiteboard Audio Video Environment), which is an interactive classroom model.

“Outside of major cities, good teachers aren’t easily available. Our purpose is to not let geographical constraints hamper education. So going forward, while online courses will be our priority, we will open centres across cities for children to attend classes in-person… those who can while letting others attend via online lectures,”  says Krishna. “Opening offline classes is a result of what parents have shown their inclination towards.”

Byju’s will invest around $200 million to open brick-and-mortar tuition centres for schoolchildren. By early next year, it plans to launch 500 centres in 200 cities. Unacademy announced its foray into offline learning through its new Unacademy Centres—currently in Kota, Jaipur, Bengaluru, Chandigarh, Ahmedabad, Patna, Pune and Delhi—to extend access to top educators in NEET-UG, IT-JEE and foundation (9-12) course categories. upGrad—which is expanding its global presence—is also pushing to provide physical counselling centres for parents and students to understand its higher education and skilling offerings.

Like Aakash Institute, these centres will combine digital with physical—teachers will be in the classroom while instructing through screens.

Edtech platforms are also partnering with colleges to tap into their physical presence. The goal is to reach as many students as possible while handpicking the best aspects of being present offline and online.

Sunstone Eduversity, with its pay-after-placement model, offers courses based on such partnerships with more than 24 universities. Similarly, global platform Coursera announced partnerships with IIT-Bombay, IIT-Guwahati, Indian Statistical Institute, and Ashoka University in October 2021.

Though the formal education system in India is multi-fold and regulated, the demand for informal education which includes supplemental learning tools, coaching classes, test preparation, vocational training, etc has grown up significantly in the last five years. A report by independent transaction advisory RBSA points out that this transformation will be significant in Tier III and IV cities, towns and villages where the students have been able to get access to quality education in remote locations through edtech platforms.

“Offline expansion for online-only edtech companies entails providing a uniform educational experience across the country and acquiring regional brands. These companies are focusing on smaller towns for expansion to physical centres due to the relatively low availability of high-speed internet, along with general limitation pertaining to faculty that has been technologically-upskilled,” says Anshuman Magazine, chairman & CEO—India, Southeast Asia, Middle East & Africa, CBRE, a commercial real estate services and investment firm.

“This switch to a hybrid model is primarily to serve students from Tier III cities that serve as catchment areas for students taking competitive exams. These offline touch points also act as customer acquisition channels for the internet firm, particularly if students return to traditional classrooms,” says Magazine. “Apart from client acquisition, having an offline presence can assist develop brand trust among low- to middle-income parents who may have seen the company’s television commercials or online marketing but are hesitant to spend in a digital-only mode of instruction.”

Magazine predicts a massive surge in real estate demand as these unicorns expands their offline presence. “There is an estimated enrolment of 37 million students over the next eight years in these platforms… it means a surge in real estate activity to meet the demand for a huge amount of physical space being created by these unicorns. There’s no doubting that in the future, all edtech solutions will include both online and offline components,” he says.

“Tier I and II cities approach education a bit differently than Tier III and IV cities,” Krishna lets on. “While the bigger cities focus on convenience—since quality educators are easily available—in smaller towns, quality of education is valued more because of the dearth of good educators followed by the price of the course and convenience comes last.”

Educators, who till the pandemic, were confined to their neighbourhoods, are at an advantage with the behavioural shift towards digital learning. They can now teach students beyond their geographical locations and grow their business further. “The shift in the behaviour of educators and students is akin the adoption of digital payments during demonetisation. It won’t be reversed now that they see so much value and convenience in it,” says Mukul Rustagi, co-founder and CEO of Classplus, an edtech platform tailored for teachers to expand their presence online. Rustagi adds that they haven’t seen any dip in the demand for our product since schools have opened.

Finding it hard to adapt to teaching online initially, Swizy Sharma, 55, a teacher in Ludhiana, Punjab, mastered the art. She started taking tuition classes after school hours online. “Not only was I conducting regular school classes on Zoom, but I was also taking tuitions in the evening,” says the science teacher for classes 5 to 8. Sharma plans to resume in-person tuition classes at her home while continuing with the online classes. Physical tuition classes are a hit among students, she says.

Edtech players will have to compete with offline tuition centres. “This might be an issue… we still don’t know how our physical centres will phase out amidst the tuition centres in cities,” says Krishna, adding that demand for trusted independent tuition centres is higher in Tier I and II cities than in Tier III and IV cities.

Speaking about the economics of unicorns going hybrid, Magazine says, “The odds are stacked in favour of well-funded, online-first firms who have spent enough on marketing and aggressive sales to ensure that their products are well-known in Tier II/III regions. These businesses can provide reasonable pricing, consistent service and a blend of online/offline which gives them an edge when it comes to attracting students from Tier III onward areas who will be more inclined to join.”

“It is evident that online learning is here to stay given its flexibility and advantages to both students and teachers. The opening of physical centres will only add to this spike and will help edtech companies make inroads into a larger untapped market segment with limited access to the internet and smart devices, which deters accessibility to online education,” says Viral Jani, EVP and country head, India, Times Bridge, global investment and partnership arm of The Times Group. “Offline education centres would play a huge role in building trust and familiarity for students with edtech platforms.”