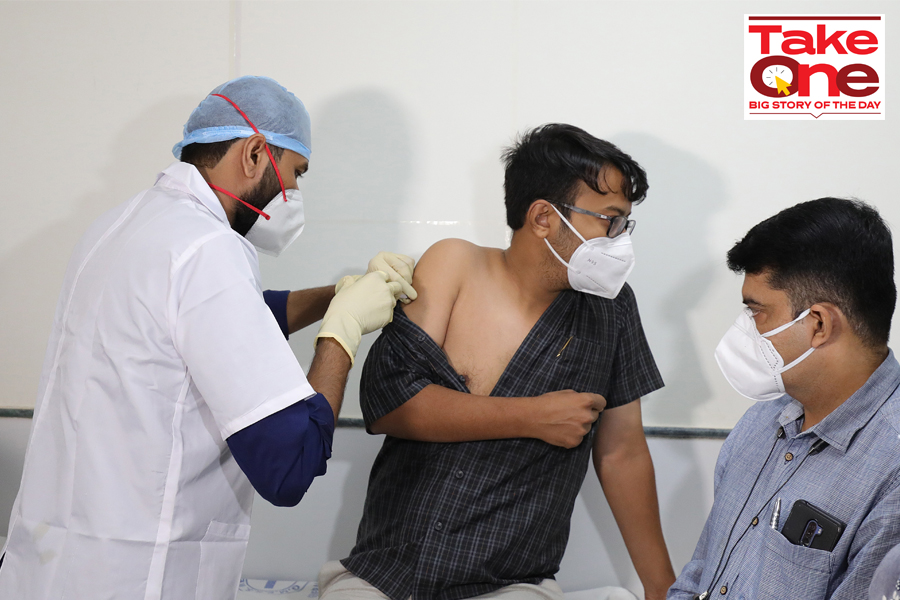 A volunteer gets a dose of Covaxin Covid-19 vaccine during a clinical trial at a civil hospital in Ahmedabad On the morning of August 7, the mother-daughter duo of Hema and Chhavi Damani, 51 and 26 respectively, decided to twin in their T-shirts, trousers and masks. A short prayer followed before they headed for the Zydus Hospital in Ahmedabad for a “noble cause”—volunteer for the Phase 2 trials of ZyCoV-D, one of the possible Covid vaccines developed by pharmaceutical major Zydus Cadila. “My husband is a physician at the hospital,” says Hema, a homemaker. “One day, he came home and informed us that Zydus Cadila is going to start the second round of human trials at the hospital. My daughter and I asked him if we could be a part of it.” Both the mother and the daughter didn’t have any second thoughts in putting their hands up as they knew that getting volunteers would be key to running successful trials. A day before they got the jab, Hema and Chhavi were taken to the hospital for a screening, a blood profile and RT-PCR tests to ensure they didn’t have any antibodies already. Trial participants are expected to have normal blood pressure and sugar levels and pregnant women and children are barred from the exercise. Once vetted, the doctor-in-charge sat them down to discuss the road ahead as well as hand over the eight-page Informed Consent Document that explained in detail the vaccine, possible side-effects, the number of visits required, the reimbursements they will receive for hospital visits, etc. They were also told that participants will be monitored for the next six months (187 days) for side-effects. “There was an initial apprehension of sorts, but once I understood the procedure in details, I wasn’t too scared,” adds Hema.

For her, Chhavi and 18 others who were volunteering on the same day, the vaccination began with a routine hospital admission chore—checking in and being assigned beds. Hema felt the nerves once when she was hooked on to the monitors (“but it was more to do with the hospital environment than the shot”) and then when the doctor finally pulled out the needle. “I told myself I’m in it and can’t back out. The shot was slightly painful, but I was fine after a few minutes,” she adds. Fine enough to return to reading Manu S Pillai’s The Courtesan, the Mahatma and the Italian Brahmin: Tales from Indian History—and Chhavi to doodling on her sketchpad. After being observed for four hours, the trial volunteers were allowed to leave with detailed guidelines on what to watch out for, especially fever, and immediately contact the doctors if they faced any trouble. They were also asked to maintain a daily log sheet on fevers, body aches, redness or swelling around the point of the shot. “We were given two more shots with an interval of 28 days between each shot. All the three shots went well, and neither my daughter nor I has experienced any side-effects,” says Hema. Hema and Chhavi don’t know if they received the vaccine or a placebo (as is mandated in a double-blinded trial where neither the doctors nor the participants are aware of the contents of the vial). But the seamless process spurred them to spread the word among friends and family and inspire them to join the trial. “Many of them were scared initially but later some signed up. We’re glad we could convince them,” says Chhavi. According to news reports, Zydus Cadila enrolled and dosed around 1,000 volunteers across 11 cities for the Phase 2 trials. This is a critical phase of testing, involving a large pool of candidates split into groups of varying age, dosage etc; once inoculated, they are studied to understand the safety and immunogenicity of the vaccine. The pool is further widened in the third and final phase, for which Zydus Cadila plans to rope in 15,000-20,000 people. The company hopes to be ready with the vaccine by March 2021. With three of the most popular vaccines—Serum Institute’s Covishield (the Oxford/AstraZeneca vaccine that Serum is manufacturing in Pune), Bharat Biotech's Covaxin, and Zydus Cadila's ZyCoV-D—being trialled in India, the country is playing a crucial role in the global fight against Covid. And the promises they hold out of a much-desired return to the old normal have helped break down deeply-entrenched fears and prejudices. Sixty-six-year-old Meeta Shah, for instance, signed up as one of the first five volunteers for Phase 2 of the Covishield trials at Mumbai’s BYL Nair Hospital despite her inherent fear of needles. After the mandatory pre-screening, Shah reached Nair Hospital on September 26 with her son and three family friends in tow. “I cry while taking injections but wasn’t scared at all while going for the trials.” Once done, the candidates were allowed to leave in 30 minutes and advised to take three doses of paracetamol daily for the next three days to keep a possible fever in check. A fortnight later, she woke up with severe body ache and weakness. “The doctor asked me to take paracetamol twice a day; it didn’t work. We got a Covid test done, but it came negative. I took medicines and rested for two days and started feeling better from the third day,” says Shah. On October 27, she went to take the second shot and this time she convinced her 72-year-old husband to join her. Says Bipin Shah, whose hypertensive, diabetic and on medication, “When my wife and son went to take their first shot, I wasn’t too keen. I thought let the younger ones get it first and I’ll take a call thereafter.” A month and a half later, he’s free of any side-effects and has managed to convince other relatives to sign up as well.  Jayesh (name changed), 37, and his wife, trial participants at the Nair Hospital on October 18, also had fever and body ache two days after getting the first shot. “The arm where the shot was given started hurting too. The doctor suggested paracetamol and I started feeling better from the next day,” says Jayesh. He admits to being scared of the uncertainties but says was driven by the larger motive of ending the pandemic with a vaccine. The only quibble, if one must? The duo didn't receive the Rs 500 that was promised as travel reimbursement. Both Serum Institute and Bharat Biotech have recently sought emergency use authorisation for Covishield and Covaxin, respectively, raising hopes of a vaccine by the end of the year or early-2021. Covishield’s full trial data published in The Lancet on December 8 confirmed the efficacy rates of its interim results—an overall rate of 70 percent, with 62 percent for the majority and 90 percent for a smaller sample. Will the fast-tracking bring into question safety and efficacy? Dr Om Shrivastava, an infectious disease specialist in Mumbai, explains: An average vaccine takes about 5-25 years—Ebola’s took five while it took 15 years for the Rotavirus. “[For Covid-19], we have compressed the total process into nine months. While I'm excited and following developments keenly, I'm also keen to make sure there is 100 percent safety. One should only benefit by taking the vaccine,” he says. The end is near, and the world is keeping its fingers crossed.

Tweets by @forbes_india
The most retweeted, liked and quoted tweets of 2020 are...
Modern entrepreneur Mahir Khetwani revolutionises the construction entity 'Rosa Group'