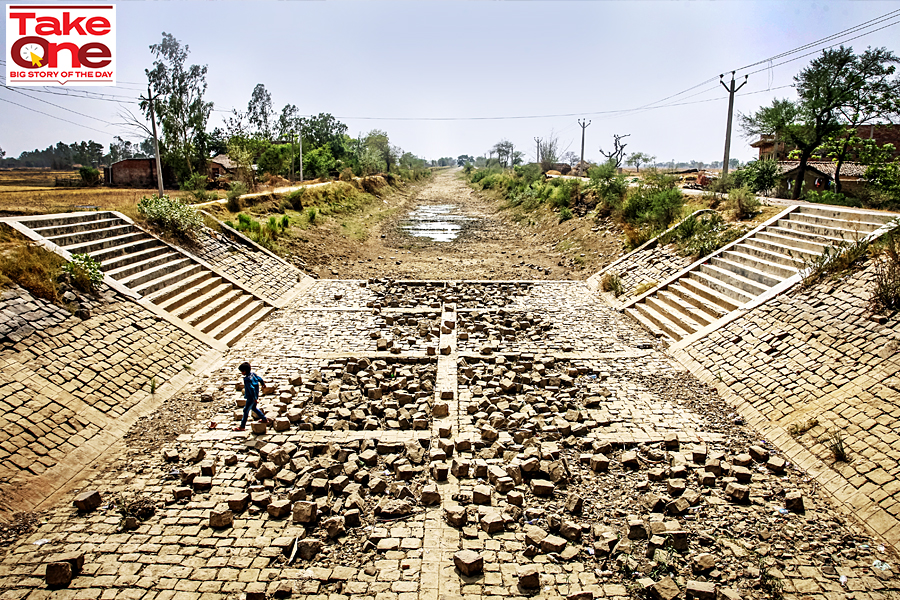 A file photo of a dried canal in late May in Badokhar village on the outskirts of Allahabad, Uttar Pradesh. A severe heatwave in May had caused drought-like conditions in vast swathes of India's agricultural heartland as the rains that usually arrive before the country's prolonged monsoon season had failed. India is particularly vulnerable to drought as its under-developed agriculture sector is heavily dependent on timely, uninterrupted natural weather cycles for its survival. Image: Ritesh Shukla/Getty Images

In April 2022 there were few indications of a deficient monsoon. Weather forecaster Skymet predicted rains within 98 percent of the average. And the arrival of the first spell in late May pointed to a timely start of the monsoon.
But in the first full month–June–it became clear that the start was not as expected. The country ended the month with an 8 percent shortfall in rains. Pretty soon it became clear that La Nina would have a role to play.
This weather phenomenon results in a lower than normal surface temperature of 3-5 degrees in the eastern equatorial part of the central Pacific Ocean affecting multiple weather patterns across the globe. In India it can result in more rain in the west and south and a deficiency in the east.
So far the monsoon has played out according to this script.

According to G P Sharma, president, meteorology, at Skymet Weather, July and August were excellent months and saw a surplus of 17 percent and 5 percent respectively.
“Normally we don’t see such a surplus,” he says. In the west and south this has meant a shift to cotton, an important cash crop for farmers.
The problem in 2022 has been the spatial spread with east Uttar Pradesh, Bihar, Jharkhand, West Bengal and the north eastern states recording a large deficit. In east Uttar Pradesh rains have been down 44 percent, in Bihar 39 percent and in West Bengal 28 percent. Importantly, these areas have low irrigation coverage and as such cannot make up for the deficient monsoon. Already there are signs of a lower than normal sowing of sugarcane, a water intensive crop that contributes to farmer earnings in Uttar Pradesh and northern Bihar.
While there is an impact on sowing, Sharma says a greater risk is that late rains in September or early October could damage the standing crop resulting in lower yields. This could affect food inflation in the months ahead.

Uneven distribution of rainfall has affected paddy cultivation in several parts of the country. The sowing deficit declined to 6 percent for the week ended August 26, from 8.25 percent in the previous week. But parched paddy fields present a worrisome situation for hapless rain dependent rice growers in states like Bihar and Jharkhand.
As of August 26, government data shows there is a year-on-year sowing deficit in Jharkhand, West Bengal, Chhattisgarh, Uttar Pradesh, Bihar and Odisha due to deficient rains. These states account for over 37 percent of India’s rice production. A recent note by Nomura cautions the price of rice will go up and add to inflation woes. The foreign brokerage firm expects rice output to be lower by 10 million tonnes—a decline of 7.5 percent year-on-year--due to lower acreage and yields.

“As of July, retail rice price inflation rose 9.3 percent y-o-y and we see risks of a further rise. Together with higher wheat prices—due to the heatwave—higher cereal price inflation could offset the disinflationary forces from lower global commodity prices,” it adds. Nomura’s economists expect headline inflation to remain sticky above 6 percent until February 2023.
Madan Sabnavis, chief economist at Bank of Baroda, is wary of the developments. In order to address the shortage of wheat the government had earlier announced a higher allocation of rice under the free food grain scheme. This could further aggravate the situation and put pressure on rice price, Sabnavis explains.
“The concern is both for rice and pulses,” Sabnavis says. “Harvest will be lower though, as of now, we do not know by how much,” he adds.
Until August 26, paddy was sown in approximately 37 million hectares versus 39 million hectares during the corresponding period last year. This suggests there is a high degree of risk of a decline in agricultural produce of food items like rice and pulses (arhar dal) because sowing timelines have been pushed in several states.
To be sure, a pick-up in rainfall will considerably soothe concerns, but farm income is under pressure, and the final situation will be clear around the harvest season. As of now, rice and pulse prices have reportedly risen between 5 to 10 percent since mid-July fuelled by fears of a supply crunch.
Food inflation hurts low and middle-income households most. “The government may need to step in once again, as it did when wheat prices were going up, if the price of rice keeps increasing too. This will have fiscal implications,” says Axis Bank’s chief economist Saugata Bhattacharya.
Farmers in most regions depend on monsoon to irrigate fields for crop cultivation. Traditionally, planting paddy seedlings after the month of sawan [which ended on August 12] is not considered favourable. Besides, farmers’ costs also rise as they need to use diesel pumps to irrigate fields with groundwater.
Now, farmers are praying rain gods smile and make good the deficit in September to avoid the possibility of drought in some areas. Meanwhile, many struggling farmers in parts of Bihar have urged the government to step in with relief measures.
State governments are watching the situation closely to firm up strategies for crop procurement and price stability. In fact, a likely shortfall in crop output may lead to export restrictions on rice. The Public Distribution System (PDS) can cushion the supply shock to some extent though. There is also good news on the procurement front as the last two years have seen a sharp increase in government procurement aided by good harvests. Rice production at 130 MT (2021) was at an all-time high, says Pushan Sharma, director, CRISIL Research.
“Rice has a high weight in the CPI so that could impact food prices to that extent, but that said I think a part of the deficit could be covered by the buffer stock,” says Madhavi Arora, lead economist, Emkay Global.
Yet, structural cracks in the PDS have meant it has failed to absorb supply shocks and stabilise market prices several times in the past. Importantly, pulses are not covered under the system, Sabnavis points out. He adds that farm income in aforementioned rice and pulse producing regions will be affected and this could subdue the festive demand in rural areas.
While the monsoon may yet recover in the eastern part of India the lesser sowing would result in higher food prices and lower farmer income putting agricultural growth at stress. This coming off a high base of 3.9 percent in 2021-22 would result in a GDP hit for 41 percent of the population that derives its income from the farm.

Tweets by @forbesindia
Robobus: Autonomous shuttles for working, gaming, exercising or even sleeping on the move
How much time do people spend on social media and why?