Is the Real Estate Bubble Big Enough to Naturally Burst in 2014? 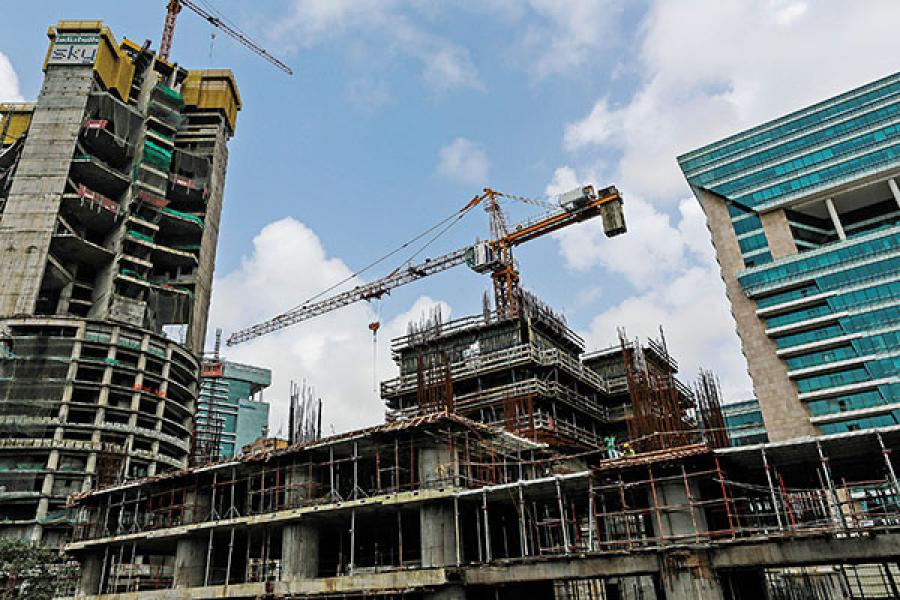 One of the primary concerns for the real estate sector in the coming year is very clearly this: Will the much talked-about asset bubble inflate further or will it burst?

2013 was mired in existing challenges such as subdued sales, piles of unsold inventory and builders going bankrupt. These problems will continue in 2014 as well, and, given economic instability, matters could become worse. However, it is very difficult to forecast anything in India as the real estate market is not subject to a fixed pattern. A great degree of political uncertainty, liquidity issues, high interest rates and cautious sentiments are expected to underpin the real estate sector in 2014 too. The only positive energy in this sluggish sector springs from the fact that the sales, though slow, are not stagnant.

India’s real estate market has been faltering for quite some time as the economy remains under stress. Realty prices have been surging in an unprecedented manner unlike income levels which are not rising. The price increase is mostly speculative and can be attributed to the predominantly capital-driven nature of the sector.

It is an established fact that the real estate bubble in the developed world is a creation of the central banks’ strategy of keeping interest rates at a very low level. This excess money has also trickled into the real estate markets of emerging economies as overseas investors began to look for alternate investment avenues.

While the cause might be the same at home, the movement of capital across the various geographies in India needs serious analysis. Let us look at each of the significant markets to understand the creation of the asset bubble.

The MMR (Mumbai Metropolitan Region) market has a characteristic of its own (see MMR graph). There is huge latent demand but exorbitant prices make property unaffordable for most buyers. The price level here is way above the average price level of India but the annual acceleration is not very steep; in fact, it has been almost stagnant for quite some time. The realty cycle in MMR follows a long drawn pattern and has a low theta (angle of correction). The graph illustrates that the annual price growth post the 2008 meltdown touched 48 percent owing to substantial money coming into the MMR markets and then, after peaking at 54 percent in the second quarter of financial year (FY) 2010-11, the bubble started deflating.

After that, the MMR market with sky-high price levels and declining sales velocity was considered an unproductive arena and the funds inflow reduced. By sales velocity, we mean the ratio between monthly sales and total supply. The price rise after this, though persistent, has been comparatively slow. It is also interesting to note that even after a slow growth rate of prices, the pace of offtake has been slowing.

NCR (National Capital Region, which includes New Delhi), on the other hand, is an entirely investor-driven market. A lot of property is being sold in sectors which may remain uninhabitable for a long time. The price rise post FY 2010-11 continued to be sharp and persists even today. After touching the threshold of 27 percent year-on-year in the second quarter of FY 2012-13, the growth rate has started to peter out. One can already see the correction in the secondary market in NCR. The situation indicates that the existing bubble in tier-I markets like NCR and MMR are at the threshold of bursting. Owing to the high level of unsold stock in these markets, the prices might soon begin to tip off. 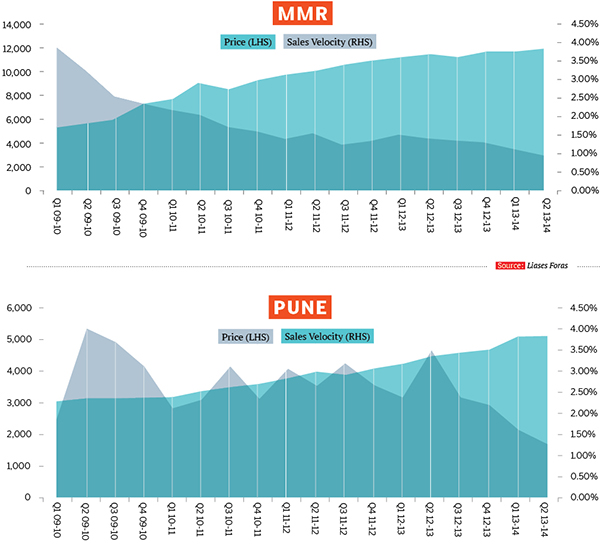 After burning their fingers in saturated and unproductive markets like MMR and NCR, investors shifted focus to IT hubs, Pune (see Pune graph) and Bangalore, in FY 2009-10. Both these cities, with similar dynamics, became a favourite with every PE investor and began to see a huge influx of funds. But this is where the problems started arising. The cities witnessed about 20 percent price rise in FY 2012-13 when their sole driving factor, the IT sector, was not doing well.

These two cities are classic examples of how prices get inflated due to a massive influx of money. The FDI and PE funds flooded both these markets and led to a surge in the price levels, making it more of a speculative investor-driven market. Thereafter, these prices are rendered unproductive and that leads to a sales decline. The slowdown has thus created a downward pressure on prices and correction may begin after two to three quarters.

Chennai, though touted as one of the best performing markets today, has inherent issues of its own. The improvement in performance stems from the fact that the city is expanding at a fast pace. When one sees the market from an efficiency point of view, there are various lacunae: The month’s inventory still remains quite high and the prices have surged over the last couple of quarters. However, the secondary market correction has already begun in Chennai since the past two quarters.
Kolkata and Hyderabad are the only two geographies which are efficiently priced; since the investor participation is nil, there is no sudden spike or speculative tendencies. Both these markets are in a productive spot and have never had an asset bubble.

Not all geographies are affected by the asset price bubble; those that are not influenced are the ones which have not attracted a great deal of investment. Also, people often tend to wonder ‘why the bubble’ since there haven’t been many land deals. But this is where the cascading aspect of realty comes into effect. Few land deals in the city centre can affect or result in escalating land value thus disturbing the urban economic balance.

Due to the affordability factor for buyers and the perpetual liquidity crunch, the government is coming up with many ways to infuse funds into the sector. In case more money is available due to more FDI or other alternative methods, we may see the process of correction being deferred and the market becoming inefficient. And if realty fails to attract that money, then a sharp correction will follow and affordability will be maintained.

Another concern in India is the increasing bank lending to the real estate sector. Latest figures released by the RBI indicate that the total exposure to this segment has surged 17.3 percent to Rs 9.33 lakh crore during the financial year ended March 2013. This expansion needs to be viewed in light of the steep acceleration in housing prices in all
tier I and a couple of tier II cities in 2012-13. What is alarming is that the increase in exposure to the real estate segment is followed by the rise in the non performing assets (NPAs) as well. A correction could lead to reduced value of bank collaterals, thus more NPAs, which could then lead to an automatic cycle of an inherent correction in the economy.

No asset class including real estate can remain inflated for an indefinite time. At some point, these will become big enough for a crash. A sudden fall, however, will be detrimental to the financial system and the economy at large. Therefore a slowly deflating bubble which implies a phased price correction is actually something that is desirable, and 2014 just seems to be a ripe time for that.

Show More
Thank you for your comment, we value your opinion and the time you took to write to us!
Comments 34

Tweets by @forbes_india
Which Global Conflicts Will Dominate in 2014?
Economic Revival: Hopefully, Unlikely or Impossible in 2014?