A small but growing tribe of Indian authors is writing self-help books that tout desi values as the key to success in the workplace, and in life 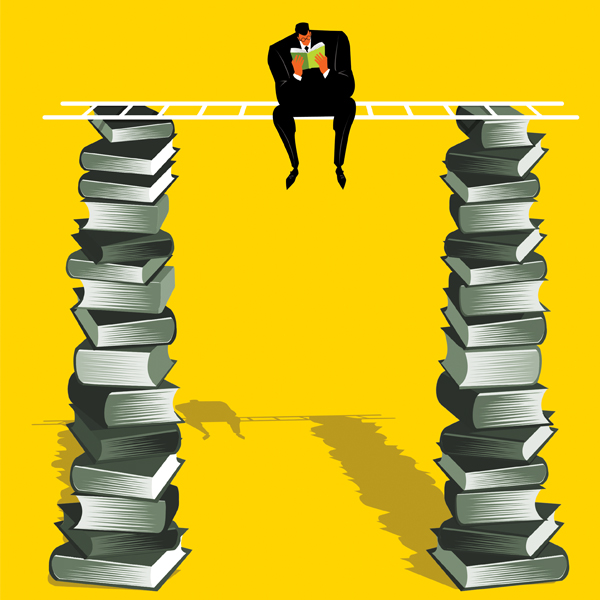 When Monideepa Sahu picked up Rajat’s photograph with “trembling fingers”, she couldn’t help but take in the “sword-sharp nose, menacing moustache and sinister grin”.  She writes: “Was I really going to meet THAT?” Over the next four pages, the reader drowns in Sahu’s stream of consciousness as she talks about her mustachioed man and how she came to love and marry him. The story is just one of more than 100 short vignettes that you’ll find in Chicken Soup for the Indian Spiritual Soul, a self-help book that promises to uplift the desi soul.

The cult-like status of the popular Chicken Soup for the Soul series—it has spawned books that address the souls of parents, Indian brides, pre-teens, Americans, golfers, cat and dog lovers, entrepreneurs and the career-driven, to name a few—speaks about the human need to constantly improve oneself or find a deeper meaning of life. Whether it is climbing the career ladder, or attaining spirituality, or even developing fruitful romantic relationships, the desire to improve is inherent. It is what makes humans, human.

In the US alone, self-help is reportedly an $11 billion-a-year industry, one that is not limited to book publishing; it also includes motivational speakers and television shows.

Capitalising on this power of self improvement, the industry has made huge inroads within India by encouraging home-grown authors as well as importing foreign brands and reinventing them to suit local tastes. Chicken Soup for the Indian Bride’s Soul, for instance, was published in 2011 after its international version made waves abroad.

That said, international titles such as Robin Sharma’s The Monk Who Sold His Ferrari, Rhonda Byrne’s The Secret and Napoleon Hill’s Think and Grow Rich continue to dominate best-seller lists. “That’s because Indians are attracted to foreign names and brands, and are enamoured with tried-and-tested theories churned out by international best-selling authors in the management and career  space,” says Mita Kapur, founder and chief executive officer of Jaipur-based literary consultancy agency Siyahi. But there’s plenty of room for made-in-India content, she adds.

India’s self-help publishing industry has grown exponentially over the last 14 years and coincides with the entry of foreign publishers in the local market. Kapur estimates that Rs 1,200 crore worth of books (written in English) are sold every year in India. “The market size of the self-help industry is about Rs 180 crore,” she says.

Retailers and booksellers such as Landmark, Crossword and ecommerce giant Amazon estimate that about 95 lakh self-help books are sold annually across the country.

Sivaraman Balakrishnan, senior manager (marketing and communications) at Landmark, says there is a growing demand for self-help books that espouse Indian ingenuity—written by Indians for Indians. It’s a reflection of the urban Indian’s desire to be successful, be it at work, at home or even at play. And unlike self-improvement classes, which require high capital and rigid schedules, self-help books are cost effective. 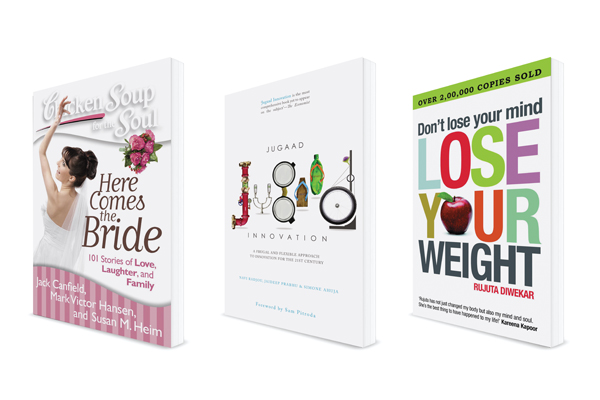 It could explain the popularity of books such as Jugaad Innovation, which has sold more than 30,000 copies since its publication in 2012 on Flipkart alone, and more than 70,000 across all outlets in India. This may not be a big number but, according to one of the authors, Simone Ahuja, traditional business books usually sell no more than 5,000 to 10,000 copies.

In Jugaad Innovation, authors Navi Radjou, Jaideep Prabhu and Ahuja offer readers six principles of applying the concept of jugaad, the Hindi word for a frugal and ingenuous approach to innovation. The book has garnered acclaim from industry stalwarts, including Sam Pitroda and Ratan Tata.

“What’s driven even more interest in the book is that we are saying that Indians have a fundamental competitive advantage or approach that can and should be learnt by others around the world. In other words, the frugality, flexibility and inclusiveness that we see in many Indian products, services and business model innovations must be adopted by global entities to effectively address the needs of consumers across the world, and to drive sustainable growth that will help these same companies continue to innovate,” says Ahuja in an email interview with ForbesLife India.

The Indian market is ripe for 21st century gurus who claim to know the secret to success, or can at least convince their audience that they have stumbled upon a foolproof formula. And publishers are actively seeking out new, but experienced voices.

Kapur, for instance, looks for works that are unique and homegrown, which go beyond the well-read and ever-present titles churned out by international authors. “Indian authors must offer something new to the canon as books entering this genre are vetted far more than the others,” she says.

It’s one of the reasons why she represented Devdutt Pattanaik, author of Business Sutra: A Very Indian Approach to Management. In his book, Pattanaik attempts to “unravel the puzzle of three hundred and thirty million gods and goddesses”, offering a “Hindu” ethos to management principles, something that has not yet been adequately covered or discussed.

Like Pattanaik and Ahuja, an increasing number of desi writers are using Indian principles to cross borders and influence readers around the world. It’s a formula that appeals to readers.

Sanjay Khosla and Mohanbir Sawhney in their well-received book, Fewer, Bigger, Bolder, offer a critique of unrestrained growth and, instead, propose fewer but better bets, using the principle of ‘kya karna hai’ (what to do) when facing a problem. They call their mantra Focus7.

In an interview to ForbesLife India, Khosla says, “The goal is to elevate a business to a position where it is growing profitably, and continues to do so in a self-sustaining cycle known as the ‘virtuous cycle of growth’. It is a practical, energising how-to-approach that has been used to transform Kraft Foods’ developing markets from $5 billion to $16 billion in six years.” 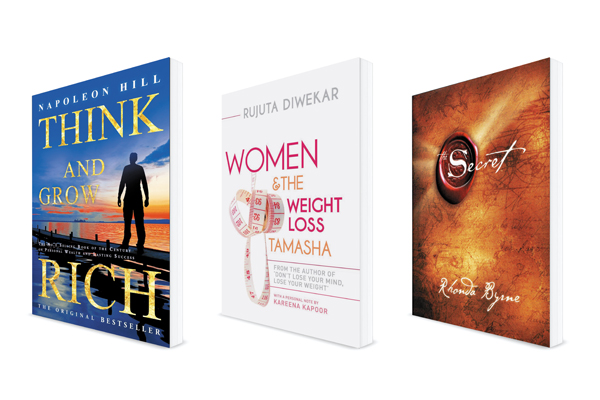 According to Khosla, the guidelines are influenced by Indian thought processes and experiences, but are then tailored for the business-minded person or an entrepreneur who may be based anywhere in the world, be it Mumbai or Milan.

Such an approach, however, begets a question, the answer to which is still being debated in the publishing world. Can you universalise or simplify process techniques or ideas and generalise them for groups of people? It also comes down to one very simple question: Are self-help books really effective?

Opponents and critics argue that the promises of self-help gurus and their books are not based on fact, but instead perpetuate the myth that they can automatically resolve marital tension or help readers obtain that elusive promotion.

This is an old debate, but there’s no denying the allure of self-help books when it comes to fuelling our hope for a better life. They hold the promise of light at the end of the proverbial tunnel. And we all want that pot of gold.

The evolution of the self-help book

It’s human to want to improve the ‘self’. The ancient Greek philosophers were perhaps aware of this. All of them, from Socrates to Epicures, offered plenty of advice on life, religion, morality and ethics. Self-help is not limited to any one period in time. In The Prince, Niccolò Machiavelli, the 16th century Florentine politician, gives sound leadership advice and answers questions on whether it’s better for a leader to be feared or loved. Can it, then, be described as a self-help book?
Officially, though, Samuel Smiles, a Scottish author and government reformer, is known as the father of the modern self-help book. In his book, Self-Help (1859), he talks about “Victorian values” and offers readers a guideline for how best to live.  In her biography, Samuel Smiles and His Surroundings, author Aileen Smiles says that, ironically, publishers rejected or short-sold Smiles when he presented them the manuscript. He was, however, forced to self publish in 1859, selling 20,000 copies in the first year. By the time of his death in 1904, it had sold a quarter of a million copies.

Charles Darwin’s The Origin of Species was also published in 1859, and sold 1,200 copies in a day. In a sense, the book, Self-Help, filled a niche market, and nothing more, but it was on the back of this text that a modern industry was born.

The numbers prove it: A 2013, New York Magazine story—The Self in Self Help—by American journalist and book critic Kathryn Schulz pegs the US self-help industry alone at $11 billion. She writes, “But how can self-help work, if we have no idea how a self works.”

Tweets by @forbesindia
Share. Don't own: The sharing economy takes off
A simple guide to expressions of art