The fine falsetto note: When men sing like women 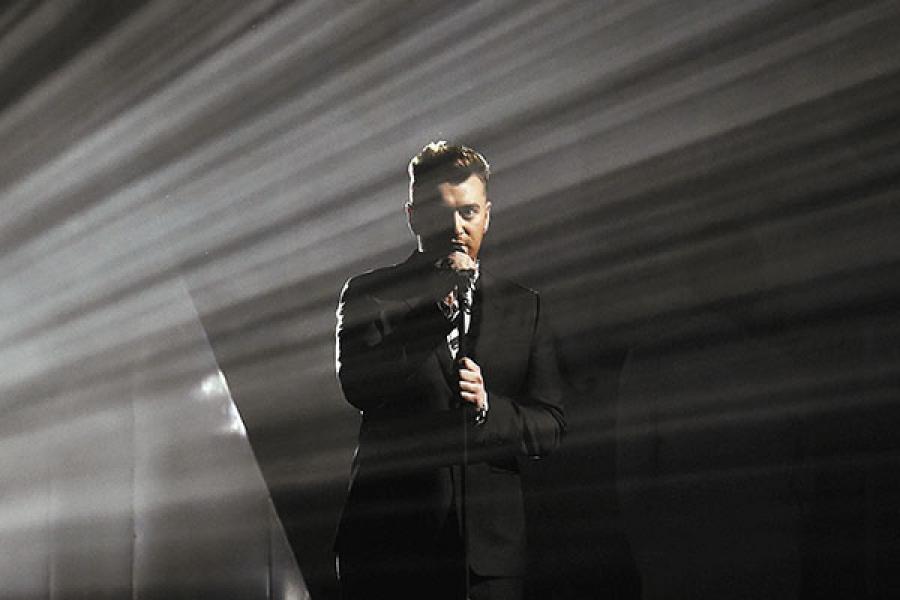 Image: Toby Melville / Reuters
British pop-and-soul romantic Sam Smith has sung in falsetto for numbers like ‘Stay With Me’

I remember it so clearly, as if it were yesterday, the number of times I would answer the phone at my parents’ place and the voice on the other end of the line would go, “Good evening, madam.” It would drive me crazy. I would yell back, “I’m not a madam!” I was just a kid, a pubescent lad whose voice hadn’t yet cracked. When it did, it wasn’t soon enough for me. I was thrilled to finally sound like a man. I imagine most boys go through that rite of passage, until the wellspring of testosterone finally gives, leading, among other masculine developments, to a growth in the larynx and a whole new voice. So what’s with all the men trying to sound like girls these days?

We’re a couple of hundred years past the trend of castrati, male singers in the European classical tradition who would lop off their sacks before they hit puberty in order to retain their angelic high-voiced pitch pipes (à la the flute-toned Vienna Boys’ Choir which, fortunately, was formed long after prepubescent castration was made illegal; its choristers’ careers last just a few years—from the age of 10 to 14).

But there seems to be a trend nowadays in the pop world for male singers to croon in registers usually occupied by their female counterparts. It’s called singing in falsetto, a technique that involves a combination of a ‘head voice’ and added breath in order to be able to hit notes significantly higher than the natural speaking voice.

A good example of this would be the British pop-and-soul romantic Sam Smith hitting the chorus of his Grammy-winning hit ‘Stay With Me’. He goes even further into the territory with ‘Lay Me Down’, his other hit from the same album, swooning his way up the register as he pleads, “Can I lay by your side / Next to you-oo-oo-oo”.

Ed Sheeran is another plaintive pop hitmaker who makes the ladies go nuts over a guy going girly-like. The twenty-something Brit singer/songwriter, whose talent was first noticed by Elton John and actor/singer Jamie Foxx, hoots his way up the refrains as he makes his way up the charts with his self-penned songs ‘Photograph’ and ‘One’.

Coldplay’s Chris Martin is no slouch with the high notes, gliding ably into the chorus of ‘What If’, exhorting his muse: “Ooh ooh-ooh, that’s right / Let’s take a breath, jump over the side”. Whereas in ‘Paradise’, from the album Mylo Xyloto, Martin switches deftly between falsetto and natural voicings. It’s a skill he deployed with great effect right from the band’s earliest days, as evidenced in ‘Spies’, from their 2000 breakthrough album Parachutes. 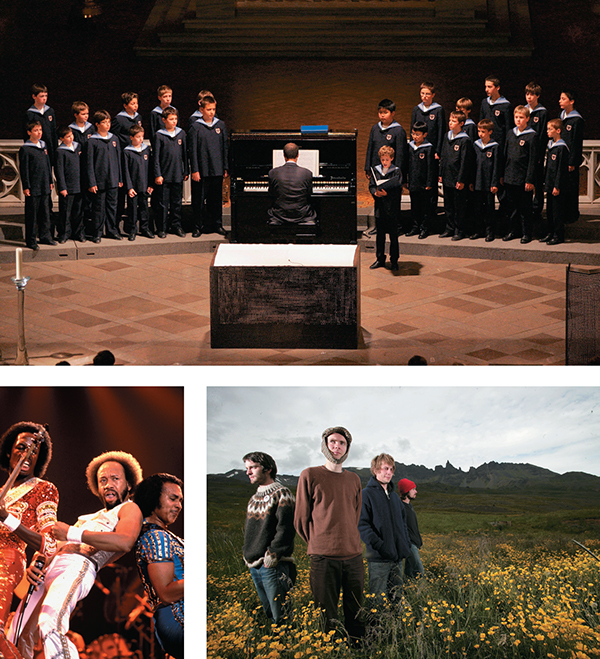 One of my favourite contemporary voices is that of Justin Vernon, the American Indie-folk-art pop musician who goes by the name Bon Iver. The double-Grammy-winning artiste (for Best New Artist and Best Alternative Music Album in 2012) barely ever drops to his natural voice, working his edgy falsetto with immaculate skill and soulfulness over highly inventive, mostly unusual and frequently odd beds of sounds, soundscapes and song forms.

‘Holocene’, from Bon Iver’s debut, self-titled album, is a surreal drop in the growing pool of this artist’s work. 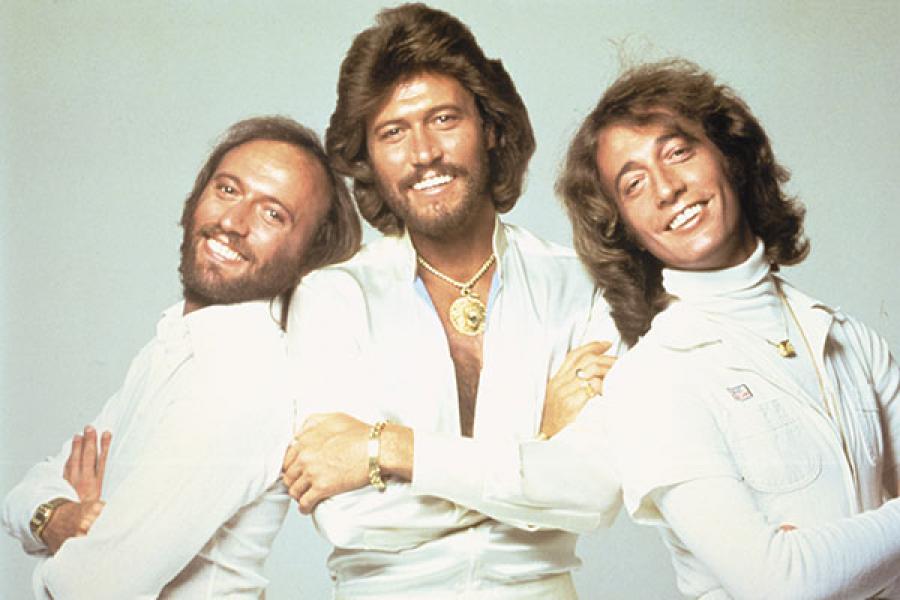 Radiohead’s Thom Yorke possesses one of modern rock’s most versatile voices, with a staggering ability to move from the low troughs of quiet emotion to wails that soar high above the peaks. Jónsi Birgisson, of the Icelandic post-rock band Sigur Rós, is equally deft in his ability to ride the crests of his band’s dynamic arrangements. The frontman and guitar player brilliantly employs his sharp, reedy falsetto to cut through and counterpoint the band’s wall of sound, featuring heavy guitars, large string arrangements and drums that work their way up to humongous crescendos. 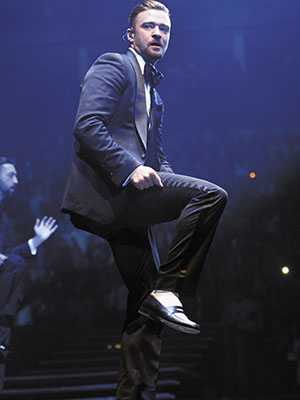 Hitting and then holding those registers is hard enough, let alone weaving those notes about without faltering. Dancing like a beast while doing it requires a wholly different kind of skill. But Michael Jackson, Prince and Justin Timberlake (pictured left) took their talents to spectacular levels of adroitness. While Jackson is justly credited with writing the book on that combination of athletic ability and artistic virtuosity, Prince took it to a whole new territory, adding a vast arsenal of instruments to his incredible palette of skills. But R&B-pop-hip hop sensation Timberlake isn’t limited to his Jackson-esque moves and hoots. He is as convincing as a fresh-faced folk singer in the Coen Brothers’ film Inside Llewyn Davis, teaming up with the actors Carey Mulligan and Stark Sands to deliver a beautiful rendition of the Peter, Paul and Mary folk anthem ‘Five Hundred Miles’.

(Image credit: Dave J Hogan / Getty Images)
But the tome on turning a high pitch-perfect ability into an indelible body of work was written by two distinct superbodies of talent. American soul, funk and R&B band Earth, Wind & Fire may have lost their founder, Maurice White, recently, but their music will remain immortal, thanks in no small part to the uniquely feminine voice of Philip Bailey. But nobody legitimised the fabulous quirkiness of men singing like a bunch of girls more than the first family of falsetto — those Australian Gibb boys who went by the name The Bee Gees.

(The author is the lead singer of Indus Creed)