The stage of Ebrahim Alkazi

The 90-year-old has shaped modern Indian theatre, and many of its stalwarts. A glimpse into his path-breaking journey [From ForbesLife India] 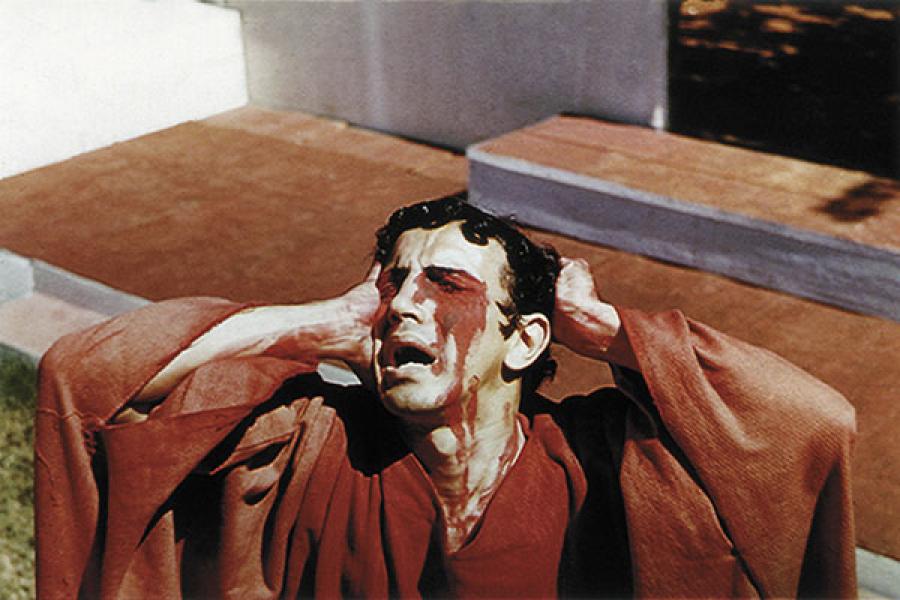 Image: Alkazi Collection of Photography - {Click here to view the full gallery}
Embrahim Alkazi plays Oedipus in Oedipus Rex, which he also directed for the Theatre Unit in 1955
To watch theatre director Ebrahim Alkazi with his actors at a rehearsal — to see him move his hands in the air expressing the value of his intent — is to have the privilege of witnessing a master at work.
A line-up of his students brings up names such as Satyadev Dubey, Vijaya Mehta, Vijay ‘Goldie’ Anand, Kusum Bahl, Om Puri , Kersy Katrak, Gerson da Cunha, Seema Biswas, Naseeruddin Shah, Manohar Singh , Zohra Sehgal, Pankaj Kapur, BV Karanth, Ratan Thiyam, Rohini Hattangadi, Raghuvir Yadav, MK Raina and Anupam Kher.
In this slideshow, we get a glimpse of the man who inspired them, thanks to ‘The Theatre of E Alkazi’, an exhibition organised in Delhi to celebrate his 90th year. A comprehensive timeline of his life in theatre, the exhibition covers all phases of his work, and has been curated by his daughter Amal Allana and son-in-law Nissar, who are also acclaimed designers and directors.
In eponymous catalogue on the theatre of Alkazi, which has been published to accompany the exhibition, will tell you that Alkazi’s intent was inspired by ideals of service.  Theatre tempered his egotistic tendencies and he put his skills into the building of enlightened institutions, setting the base for the development of modern theatre in a fledgling country still seeking—in its new-found freedom—to craft a new identity.
His legendary skills—as a painter, poet, actor, stage designer and director—were channelised towards ushering in modernism into Indian theatre.
He successfully steered or created many institutions—the Theatre Group, Theatre Unit, the Repertory Company, Art Heritage, Centre for International Contemporary Arts, Sepia International in New York, the Living Theatre and The Alkazi Foundation for the Arts.
Alkazi was always at the epicentre of the arts scene, whether in Bombay (now Mumbai) in the early 50s, or later in the 60s and 70s, when he ran the National School of Drama for 16 years, writes Amal Allana. His startling and meticulously researched productions were unique and breathtakingly beautiful in the manner in which music, text, costume and choreography were effortlessly conjoined. It included practically the entire pantheon of dramatic literature “from the Greeks to [Samuel] Beckett”, as he put it.
As a director, his handling of complex themes was revealed in his sensitive moulding of the visual aspects of the production, especially the scenography and the lighting, both of which were designed by him. Combined with the power of casting ensemble, it uncovered new dimensions of performance, giving a new thrust and shape to Indian modernity as it was evolving.
The catalogue, The Theatre of E Alkazi, is available at Art Heritage gallery, Triveni Kala Sangam, New Delhi.
Click here to view the full slideshow

Tweets by @forbes_india
The godfather of digital cartography
My New York