People around the world are asking their leaders the same question: Are you telling us the truth? 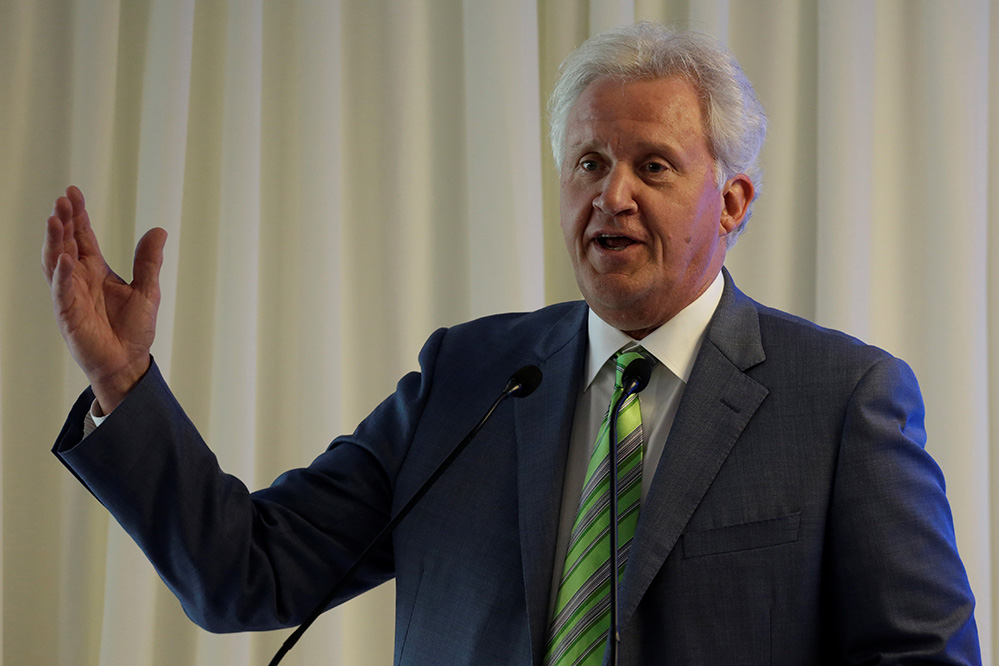 Jeff Immelt, chairman, GE
Image: Daniel Becerril / Reuters
At GE headquarters, I recently met with a very over-scheduled Jeff Immelt to get his take on the importance of authenticity in leadership. His five rules for authentic leadership should have a profound effect on anyone with a dream of becoming a future global leader.

1. You talk to your people openly about challenges.
“I’ve done this for 14 years. For anyone who thinks it’s easy, these are hard jobs. But you also have this sense that no matter what happens we can get better.”

People need to know what the leader is going through. It helps them to understand why they spend the hours and make the sacrifice for the job.

This is no longer the suffering in silence era. Communicate during a crisis, just when people feel like hiding, and they’ll be more open about accepting difficult solutions. Relate on a deeply personal level and your team will repay you by bringing their best thinking.

Immelt joined GE four days before 9/11 and the impact on the company was devastating, as it was for everyone. He learned that speaking openly about challenges inspired the team to dwell on the future and not the past.

2. Customers may fade away. But you’ve learned markets are forever.
“I had this feeling we were still constructed for an American-centric economy and I realized we had to get more global.”

Every company has great customers; great companies have great markets.

That old warning, ‘don’t sell ice cream to Eskimos’, may sound logical but is actually a delusion. Markets are no longer static. (In fact, the Inuit have actually acquired a great love for ice cream, called akutok). Today, Immelt says, business has no shelf life, and what was right ten years ago may now be obsolete. You are always planning for the next disruption, and that means looking at new markets all the time.

When Immelt took over GE his product lines were 80% consumed in the United States. Today that’s down to 20%. Changing market focus can be the most challenging of transformations, which is why he faced it head on by making it the cornerstone of GE’s strategy.

3. You can’t ignore competition, so let it inspire.
“We don’t want to be Microsoft or Google, but we’re inspired to be better because of them.”

Speed is stealth — just as with a fighter jet — it allows companies to move silently into a new sector, like Google’s self driving cars and Amazon’s Cloud. It also means that one day you will look up to find you are facing these companies in the market.

Immelt saw a choice: give up market share or be inspired. Your employees already know the ‘hot’ company and may even hope to work there. You can’t afford to lose that kind of talent. The proper response is to let them know you are going to move mountains to be as good or better. Immelt’s optimism in the face of competition is one of his secret weapons because he makes the task seem like an interesting challenge not a futile effort.

As an aside, I also found Immelt never overhypes the word ‘profit’, which is so often part of a CEO’s jargon. Immelt knows profit is the result of inspired leadership, not the inspiration.

4. You start with the idea that peak performance is unattainable without diversity.
“If you can bring it, if you’ve got merit, if you’re winning, you’re going to get promoted.

Today’s genius isn’t likely to come from the same gene pool as tomorrow’s. When the organization knows you operate from a foundation of total fairness and openness, they know the race that matters to you is the race to win.

Immelt said that when you are CEO of GE it means you are running a meritocracy. In all his messaging, Immelt strives to send the signal that talent and performance are the only demographics that interest him.

5. You admit these are hard times, and then you’re thankful.
“There’s no doubt in my mind, when I talk to other leaders, you haven’t led until you’ve been through a ‘flying close to the sun’ tail risk.

Failure is incompatible with authentic leadership.

By leading through a downturn you assure you can survive what Immelt calls ‘tail risk’. That gives you the confidence to move forward and make bold decisions about the future. A secondary benefit is that your people act and think like a team because they have shared this defining experience.

Immelt talked about 9/11 and the financial crisis, as both took direct aim at a number of GE businesses such as transportation, finance, and energy. As he reengineered the company for a global and digital transformation, he learned that under authentic leadership, tough times vanish but the talent stays with you.


Author's Bio
Jeff Cunningham is an advocate for enlightened global leadership, which he calls the most valuable natural resource in the world.