Budget 2019: An uphill task to fix the unemployment malaise

Overhauling the education system and refocusing on career-oriented skill development is the long-term panacea for India's employment woes, and the upcoming Budget needs to provide a fresh start to that journey 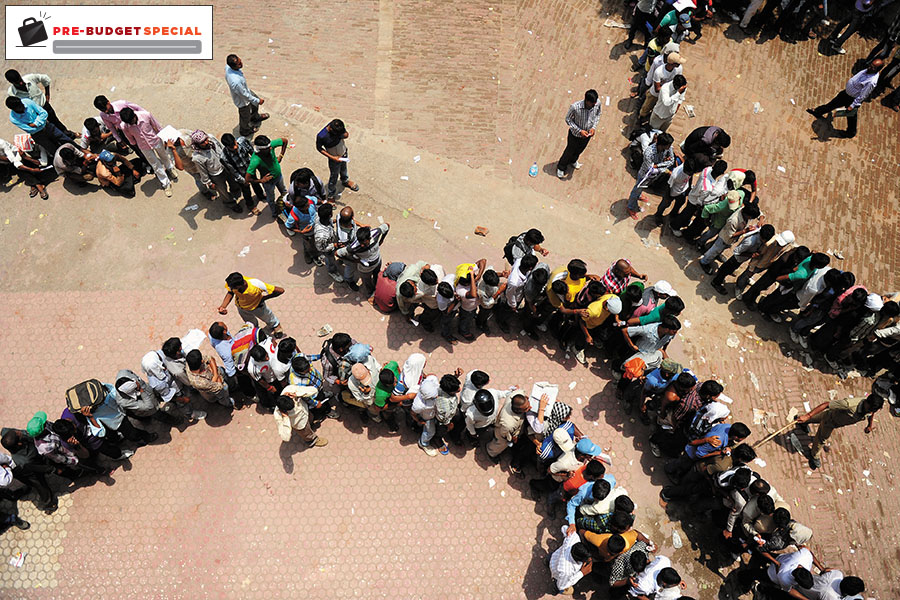 Ashwathy HS, 23, is preparing for the Public Service Commission (PSC) examinations at Brilliance College in Thiruvananthapuram. A BTech from Government Engineering College in the capital of Kerala, she was hired by Tata Consultancy Services (TCS) as a software engineer in March 2017. But after a month with the IT services bellwether that included training at TCS’s Chennai outpost, Ashwathy called it quits to focus on the PSC. “I'm more passionate about a government job. The problem with working for private companies is that the job is not secure; also I don't prefer working for longer hours and night shifts.”

Such a train of thought may run counter-intuitive to the go-go spirit associated with India’s Gen Z, but it does offer clues to the Indian malaise of unemployment—and underemployment, or people chasing jobs that have little to do with their qualifications. Ashwathy’s choice also indicates the perceptions of instability and uncertainty associated with the private sector at a time when investments for growth are subdued.

Unemployment or underemployment, India has a problem of jobs. The National Sample Survey Office’s (NSSO’s) periodic labour force survey (PLFS) for 2017-18 shows that as many as 11 states had an unemployment rate higher than the pan-Indian average. These included Punjab, Tamil Nadu, Haryana and Telangana where industrialisation can’t be scoffed at (unlike, say, Kerala or Bihar). Kerala tops the charts with an unemployment rate that’s nearly two times the national norm, and Ashwathy is perhaps the perfect epitome of what’s going wrong in India’s most literate state.

So what can NDA 2.0 do to rev up the jobs engine? The big-picture answer is, of course, it needs to kick-start economic growth, which fell to a five-year low of 5.8 percent in the January-March quarter of fiscal 2019. To create more jobs—stable ones without the fear of layoffs—industry executives point out that the government needs to identify and incentivise sectors in manufacturing and services that have the potential for job creation. A shaky industrial sector could also result in job losses—a recent report by the Centre for Monitoring Indian Economy (CMIE) stated that almost 11 million Indians lost their jobs in 2018.

Madan Sabnavis, chief economist at Care Ratings Ltd, points out that the big conglomerates like Tata, Birla and Reliance need to employ more people than they are doing today. For that they need to be in the mood to expand, a mood that’s muted these days.

“Most of the markets are quite static; the auto sector, for instance, is on a decline, and there is no reason why Maruti should be employing more people or going in for fresh investment,” explains Sabnavis. “So we need market conditions to improve, and then we come to the issue of more labour policies which the government can address through the Budget.”

Sections of industry are keen that the government create a National Employment Policy—as advocated by Niti Aayog—to create quality jobs in the formal and informal sectors. The endeavour would be to develop an education, training and skill development system that’s in sync with the needs of private enterprise and changing needs of the labour market. Generating jobs in a country where the youth account for 35 percent of the population, or roughly 333 million is critical. And the workforce is expanding at a rapid clip—from just under 500 million it is expected to hit 600 million in three years.

Among Kerala’s youth, for instance, who account for 23 percent of the population, the unemployment rate (18 percent) is much higher than the overall population (12.5 percent), according to the Kerala State Planning Board’s economic review for 2018.

MA George Francis, joint director of employment, Kerala, says: “Lack of industrialisation is one of the biggest problems in Kerala due to which extensive unemployment prevails. Also, the government needs to develop and invest more money in Kerala tourism to generate employment. Our economy mostly runs from the money coming in from the Middle East; if it stops, Kerala’s economy will be ruined.”

The Kerala Migration Survey (KMS) 2018 conducted by the Centre for Development Studies (CDS), Thiruvananthapuram, shows a reduction of 2.78 lakh emigrants from the Middle East between 2013 and 2018. “These Gulf returnees stand in lines every day to get their loans sanctioned to start their own dairy projects, poultry farms and bakeries,” adds Francis.

The lure of government jobs in a state that lacks industry is perhaps inevitable. But it is no solution. Rajeeve CR, director of Brilliance College, says, “Most educated people here in Kerala want government jobs at a time when the number of vacancies in the government sector is drastically decreasing.” That’s when underemployment kicks in, too, with people forced to compromise because no jobs are available that match their skills.

One such example is of Vipin Kumar, 27, who completed a BSc in geography and is currently working with HDFC Life Insurance as a financial consultant in the capital and doubles up as an Ola driver to make ends meet. "I work at HDFC from 10.30 am to 3.30 pm and, after that, four days in a week I drive an Ola cab from 4 pm to 1 am. I do this because I need extra income; I just got married and have a lot of responsibilities.”

Unemployment amid urban youth, in the age group of 15 to 29 years, has been constantly rising for three quarters and was at 23.7 percent in the December quarter, according to the PLFS data. Youth unemployment in the December quarter of 2018 was the highest in Bihar (40.9 percent), followed by Kerala (37 percent) and Odisha (35.7 percent), while it was the lowest in Gujarat (9.6 percent ).

Rajeeve’s prescription sums up what needs to be done to create more jobs: “Total overhaul of the education system, refocusing on career-oriented skill development, massive investment in technology and medium & small scale initiatives, and extensive startup drives.” Suffice it to say that all this can’t be addressed by just one or two budgets, or even one or two five-year terms. Budget 2019, though, could mark a fresh beginning.