Success for Infosys came after almost two decades of struggle, and at times the founders did not even have the money to pay their family’s medical bills 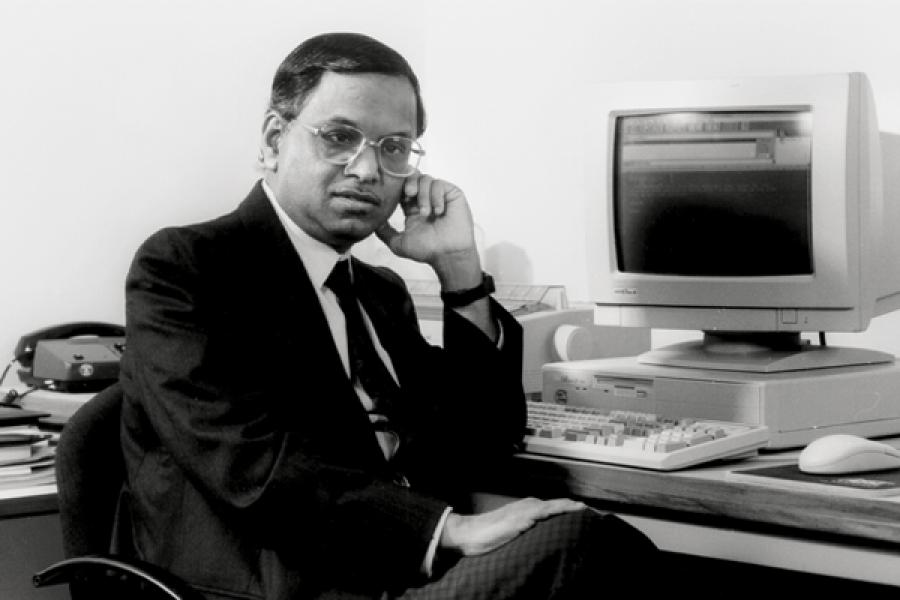 Yesterday, I joined about a thousand people at the Infosys campus to bid adieu to the company’s most famous founder, N R N Murthy. It was a mixed crowd of family members, Infosys founders and their families, people from the industry and hundreds of Infoscions, past and present. Infosys had spared no effort or expense in putting together an event, lasting more than two hours, befitting Murthy’s stature.

As expected, there was a walk down the memory lane, capturing Murthy’s early years, including the school where he went to and the places he worked at. There were family interviews and those with his friends and colleagues. There was even a B&W film, with actors playing the roles of a young Sudha and Murthy, capturing their courtship and early days at Pune. There were deeply personal accounts from Sudha and son Rohan on Murthy the family man, and also from board members Deepak Satvalekar and K V Kamath on Murthy the professional. There was even a surprise taped farewell message from Bill Gates, reminding everyone just how big a name Murthy had become in the last 30 years.

The most touching part of the evening for me was to hear a young Rohan Murthy explain his struggle and frustration at accepting that for his father Infosys was as important, if not more, as them. Quoting from Star Trek 2 (The Wrath of Khan), he said that “logic clearly dictates that the needs of the many outweigh the needs of the few”. Watched over by his wife Lakshmi and in-laws Venu and Mallika Srinivasan he said that looking at his father still put in the hours even towards the end of his career at Infosys, helped him understand what it is “to be consumed with an idea”.

It was interesting to watch the incoming CEO S D Shibulal talk about his own experiences of working with Murthy. Shibulal, who is normally reticent and at times an extremely bland speaker, opened up and spoke candidly this time. I didn’t know that he was the last of the founders to be called by Murthy to join the group. Shibulal spoke of his personal trials and of Murthy’s advice to him to maintain a diary of things he hadn’t accomplished. A habit, he says made him famous at Infosys for the number of lists he maintains.

He spoke about the time, when he was just in his twenties and he lost both his parents suddenly. It was Murthy who provided him shelter and comfort, and Shibulal, along with wife Kumari and daughter Shruti, then just a year old, moved into Murthy’s home. Another time he said Kumari’s mother needed heart surgery and Shibulal didn’t have the Rs 1.5 lakhs to pay for it. Murthy had kept aside money for paying taxes but without another thought lent that money to Shibulal.

Hearing all this it was easy to understand, why the founders, despite such different personalities and aspirations hung together. The sacrifices they had made for each other and for Infosys in the early days perhaps created a deep sense of loyalty, which wasn’t easy to walk away from. And why even senior professionals felt at times that they couldn’t enter this charmed circle.

Towards the end of the evening, when Murthy’s family walked on stage to accept a final bow and a standing ovation, Sudha pulled up all the other founders and their wives on stage. There were warm hugs all around and it all looked like a big happy, Indian joint family.

Sitting there, trying to reflect on Murthy’s life and making sense of all that he had achieved I tried to ask myself what my own learnings were from observing this great entrepreneur. And two thoughts came to my mind. One, the long period of struggle that Murthy and the founders had to go through.

When we talk of Infosys we only talk of its phenomenal success – the billions of dollars of wealth, its stratospheric rise, its American style campuses. It is easy to forget that it came after almost two decades of struggle, and that at times the Infosys founders did not have the money to pay even their family’s medical bills.

By the time I started writing on Infosys, about ten years ago, it had already become a phenomenon. Sitting in that hall yesterday, I wished I had known them earlier. When the company and founders were still struggling, it would have made for some really good life lessons, and a great story.

As speaker after speaker recounted Murthy’s past, I realised that Murthy took enormous risks in those early years and without those risks and bold decisions, Infosys wouldn’t have been here at all. And yet, most of the tough calls he took were in the period when he was the CEO, between 1981 and 2002.

As soon as Murthy stepped down as CEO, It seems like Infosys stopped taking risks. Perhaps it had become so successful that Murthy felt he had a perfect formula. Or he felt that the others who came after him did not quite have the same appetite for risk and discouraged them from doing so.

In his farewell address, Murthy said he wanted the present leaders at Infosys to learn from Infosys history and their past. And I can only wish that the Infoscions present in that room were paying close attention to some of the brave decisions Murthy himself took and have the courage to emulate them.