Tough Time To Take Over

As I write this letter, the Indian cricket team is reeling under the after-effects of yet another abject batting performance in England. If it weren’t for a resolute century by Rahul Dravid, the match would have been long over. 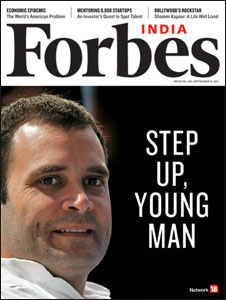 In many ways, our cricket team’s fortunes are no different from that of the Manmohan Singh government’s. For the past few months, the central government has been bedevilled by a string of gaffes, the last being the arrest of activist Anna Hazare. The early morning swoop on August 16 was a monumental error of judgement that ended up in a wave of protests across urban India and galvanised civil society support on a scale not seen in recent times. It took a 41-year-old general secretary of the Congress Party — supposedly a greenhorn in politics — to drive sense into his senior colleagues in the Union Cabinet.

Rahul Gandhi’s intervention may have resulted in the government releasing Hazare from jail, but the Congress Party’s miseries run deeper. The government seems hobbled by poor leadership. Such is the paralysis in governance that a change of leadership is perhaps the only viable solution to stave off a further decline in credibility and even the prospect of a mid-term election. So, will the Congress muster up the courage to bring in Rahul Gandhi as PM?

It is a tough time to take over. Sonia Gandhi, the party president, is convalescing abroad after an undisclosed illness. There’s a serious loss of credibility in the government. And the Opposition is readying itself for a massive fight-back.

So, is Rahul ready to be pitch-forked into the centre of the action? So far, the young man has refrained from being drawn into public debates and avoids the media. That’s why you’ve got to read Special Correspondent Udit Misra’s story of the Prime Minister-in-waiting and the complex choices before him. Many bright, young folks like Udit, who grew up in the era of combative televised debates, remain sceptical about the young man’s abilities to lead the country. So, will Rahul pick up the gauntlet?

Tweets by @forbes_india
Adieu, Narayana Murthy
N Murali: I Have Not Known Life Except In The Hindu