The world's second most populous country in the world still has a lower percentage of women in the workforce compared to the global average, due to high gender inequality in society and at the workplace 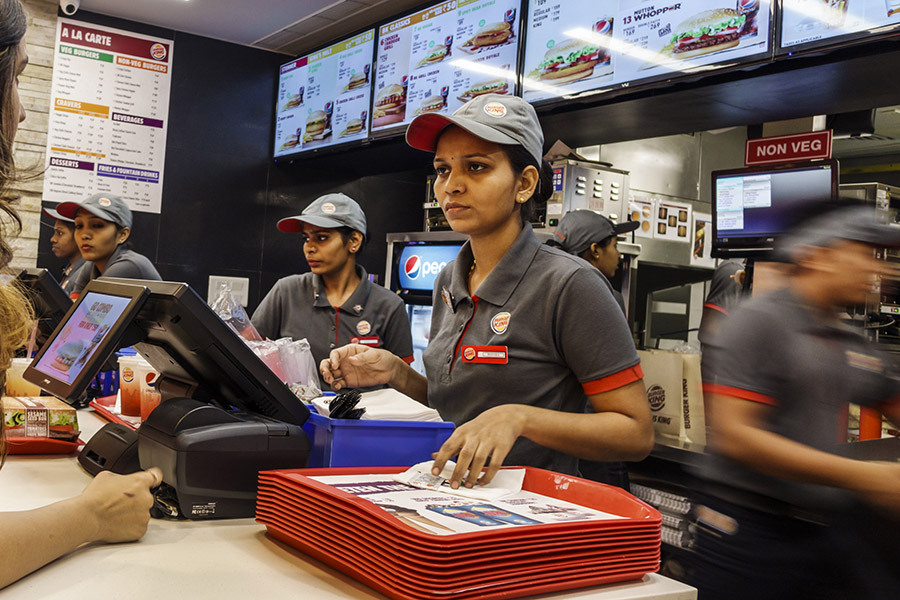 Image: Jeffrey Greenberg/UIG via Getty Images
India’s annual gross domestic product (GDP) could rise an additional 18 percent or $770 billion over its business-as-usual GDP by 2025, if more women were to be a part of the paid labour force, a recent report by McKinsey India revealed.

McKinsey Global Institute (MGI) recently released its India-focussed extract from the ‘The Power of Parity: Advancing Women’s Equality in Asia Pacific’ report which was originally made public in May 2018. In it, the state of women’s employment in Asia Pacific is graded based on 15 gender equality indicators, which produces a Gender Parity Score (GPS), graded from 1 (gender parity) to zero (full gender equality).

The report reveals that only 18 percent of the 612.2 million women in India, contribute to the GDP. With the global average of 36 percent women in the workforce, India’s low percentage led it to score a lowly GPS of 0.30, in terms of gender equality at work. This is quite low for the economy, which generates almost 10 percent of regional GDP and is home to 33 percent of the region’s combined female population.

Meanwhile, the world’s most populous country, China, scored a GPS of 0.51 with a women’s population of 671.2 million. The report stated that the country stands to grab the largest opportunity – at $2.6 trillion – or add 13 percent to its business-as-usual GDP only by increasing the number of women in its workforce.

Overall, Asia Pacific as a region, scored 0.56 in terms of GPS, indicating fewer number of women work in the region compared to the global average of 0.61.

Within the region, the Philippines, Singapore and New Zealand are ahead of India in terms of gender equality at work, in that order. India is one of the six countries furthest from gender parity in work. The others are, Bangladesh, Japan, Nepal, Pakistan, and South Korea, according to the report. 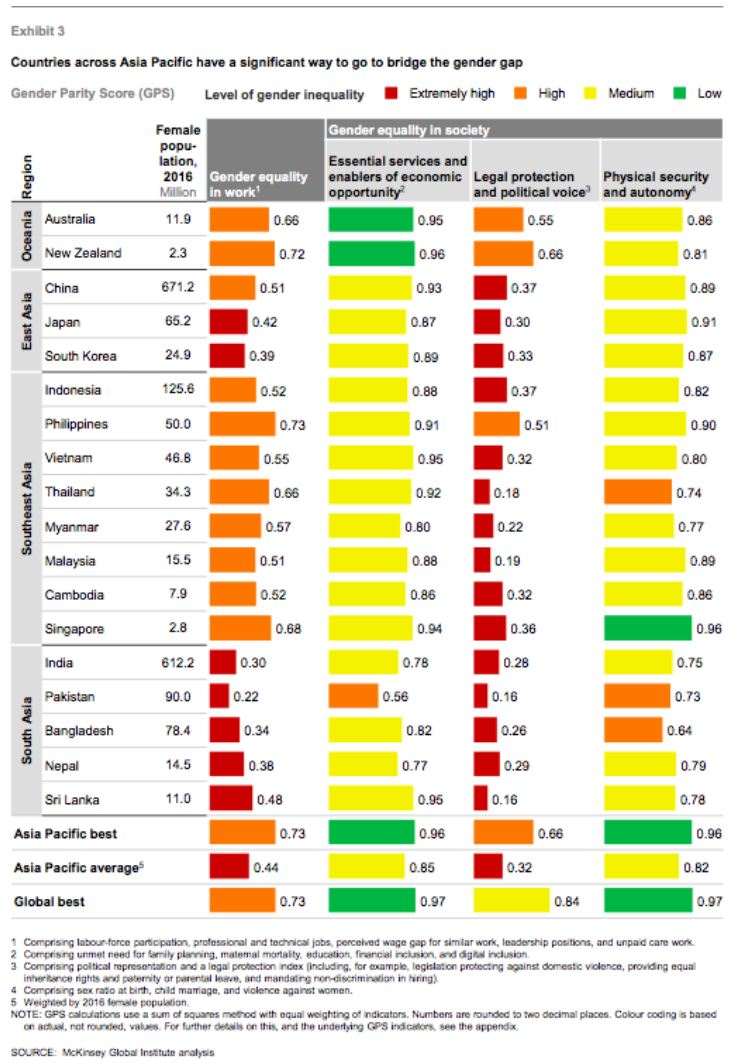 Source: McKinsey Global Institute, “India power of parity report 2018”
The McKinsey Group largely highlighted that in India, gender inequality is predominantly fueled by societal issues, including, limited access to education, healthcare, the attitude towards working women, access to finance, the internet, and the freedom to travel alone.

McKinsey, in the report, suggested that India should focus on allowing its women to be employed and compensated fairly; share unpaid care work equitably; have skills and the opportunities to perform higher-productivity jobs, and occupy leadership positions. This will help change their score on the gender parity index.

One of the most important steps suggested in the report, include saving the girl child from being aborted and later, child marriage. “The Indian government’s ‘Beti Bachao Beti Padhao’ social campaign has raised public awareness of girl-child welfare in an effort to combat ‘son bias’ and a skewed sex ratio at birth,” the report added. Providing them with equal education opportunities is also a key step to mark their entry into the workforce later. 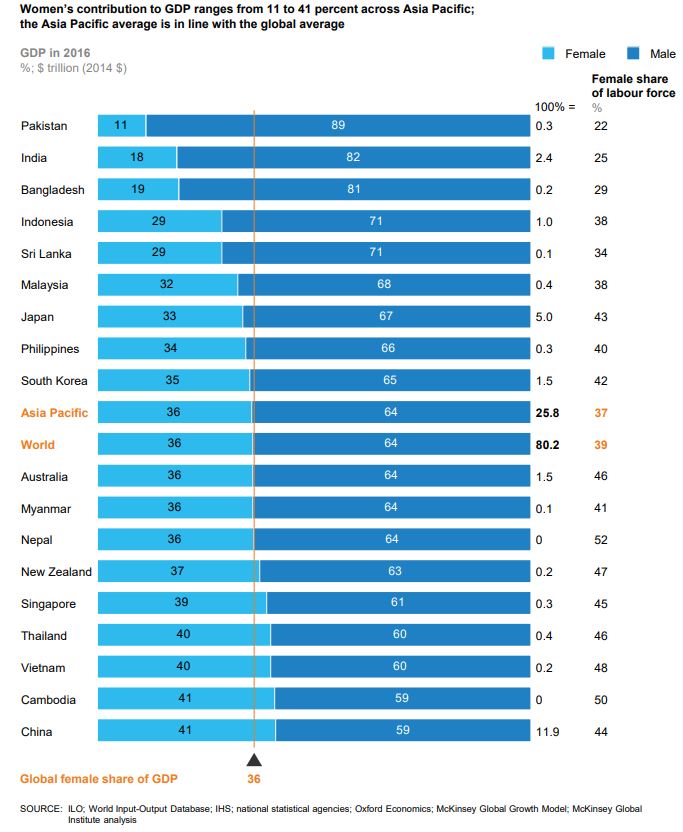 The Digital India initiative in the last couple of years, has brought about a 45 percent drop in the cost of mobile phones over the past five years. Couple that with low internet data cost, has enabled women to use internet services to gain access to education, finance and healthcare. A program started by Tata Trust and Google India, called ‘Internet Saathi’, “has women riding a bicycle, carrying two smartphones and two tablets around villages to teach women how to use them,” the report noted.

In the tier I, II and III cities, the emergence of mobile application-based taxi aggregator services like Ola and Uber “may significantly enable greater economic, social, and civic participation and reducing the time they spend doing household chores.”

According to McKinsey, the Asia Pacific region can reach an additional GDP of US $4.5 trillion in 2025 by advancing women’s equality, participation and labor force, by closing “gender gaps in health, education, and other services to enable women to participate more fully in the formal economy.”

Tweets by @forbes_india
Forever Young: Ned David is challenging the ravages of ageing
Future of TV sales in India