The Ice Candy Man and How He Built Coldex

How Gaurav Jain took Swastik Roadlines, a small trucking company in Gwalior, Madhya Pradesh, from nothing to one of the largest cold chain logistics company in India 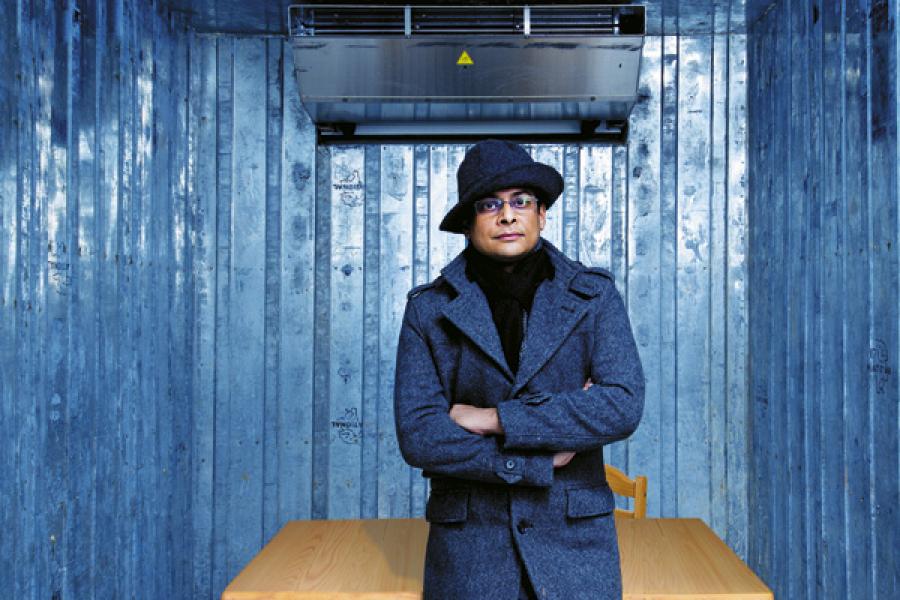 You know, there is no easy way to say this,” says Gaurav Jain, the 39-year-old managing director of Swastik Roadlines and explains. His father had started Swastik in partnership with two friends. Jain joined the company in 1999 when it was doing very well. It had 23 trucks. None of the founders realised what was around the corner.

Ever since its inception in 1997, the company had grown on the back of a single customer—JK Tyre. Almost 95 percent of Swastik’s revenues came from it. In 1999, JK Tyre’s management sacked the local vice president at the company’s plant in Bammore (Gwalior) because an internal audit showed several wrongdoings. The man who JK Tyre sacked was Swastik’s single contact point at the company. When he went so did JK’s business. “They wanted that all the relationships that this man had made should be thrown out. So humko bhi bahar kar diya (they threw us out too). Next morning we had no work,” says Jain.

He was 26 then. Over the last 13 years, he has done a rescue act on the company.  Better known by its brand, ColdEx, Swastik closed 2010 with revenue of Rs. 110 crore. With a fleet size of 650 reefer trucks, almost four times its nearest competitor, ColdEx has built a network across 55 cities in India. “Ever since we started doing cold chain in 2005, we have been growing at a rate of 50 percent every year,” says Jain. In December 2010, India Equity Partners, a private equity venture fund, picked up a minority stake in Swastik investing $10 million. Not very big numbers. But then numbers alone don’t tell the whole story of Swastik.

ColdEx has succeeded in a space where many large companies have failed. There is Gati-Kausar or Transport Corporation of India’s cold chain venture which fizzled out. Except for Gateway Distripark’s Snowman Logistics, there is hardly any company in India which has built a scalable business model. People have invested heavily in technology or fleet only to find that there are no takers. Swastik, however, has grown steadily year after year and of all places, out of Gwalior.

While Gaurav Jain was born and brought up in Gwalior, his father Om Prakash Jain migrated in the early ’60s from Agra to Gwalior.  The senior Jain is 65 now and well known in the city. He started out as a clerk in the Accountants General’s office in Gwalior. Later, he decided to get into the coal trading business which earned him both riches and fame. By the time Gaurav came back from Pune after completing his engineering, Om Prakash was wondering if he should set up a factory for his only son.

Young Gaurav Jain, however, decided that he must make some use of his engineering degree. For about 10 months he worked at a company called MTR Steel in the automation division. That’s when the opportunity of a marketing job at Swastik came up. Primarily a trucking and trading business, Swastik was doing well and Jain wanted to keep a check on the cash the company was generating. Plus there was an opportunity to travel and meet a lot of people. “So I said that chalo hum marketing karte hain, toh Bangalore gaya, yaha waha ghuma bade shaan se aur logon se milne mein bada mazaa aa raha tha (let me do something in marketing and I travelled to Bangalore, met a lot of people and it was fun and I was really enjoying myself),” he says.

But his days of doing fashionable marketing stuff were soon cut short. After Swastik’s near-death experience in 1999, Jain spent the next few years building a dry cargo trucking operation. It was an uncomplicated business. You walked into a factory, met the operations guy and looked for cargo. It could be anything from finished goods to raw materials. At the time, the industry was fairly unorganised and procurement was not a centralised function with companies as it is today. To get business you had to move from one factory to another and not deal with a corporate head office. Local relationships mattered and a few hours delay in goods reaching its final destination was the norm. This suited Jain fine.

By 2004-05, Swastik was moving dry cargo for quite a few companies, among them a large concentration of food companies. Cold chain logistics, however, was not even on the horizon. How the company got into it is a story of serendipity. And what’s more interesting here is Swastik’s secret success formula.

The power of simplicity
In 2002, Cadbury India found itself in the middle of a crisis where worms were found in a few of its confectionary products. Around this time, raw material for confectionary items like Dairy Milk or Perk or Gems were transported in open containers which had no temperature control. In industry parlance, this is known as ambient temperature. After the crisis, Cadbury launched a massive initiative to change that. By 2003-04, Cadbury was ready with a plan to invest in a dedicated cold chain.

Kausar, a cold chain company based out of New Delhi, was appointed at Cadbury’s factory in Malanpur near Gwalior. The company manufactures products like Five Star, Gems and Perk at this facility. At that time, Swastik was doing the dry cargo movement for Cadbury and Jain remembers seeing from the sidelines what was happening. “We were a part of that factory and we saw little trucks coming in, picking up confectionary and not even 40 percent utilisation was happening because it was such a light cargo,” he says. Kausar was running heavy duty reefer trucks which were meant to carry meat. Not confectionary. “So it was very easy to understand that that won’t work,” says Jain. And just like that, he mentioned it to the operations head that if Cadbury was serious about this plan, then Swastik would bet everything it had to make it work. 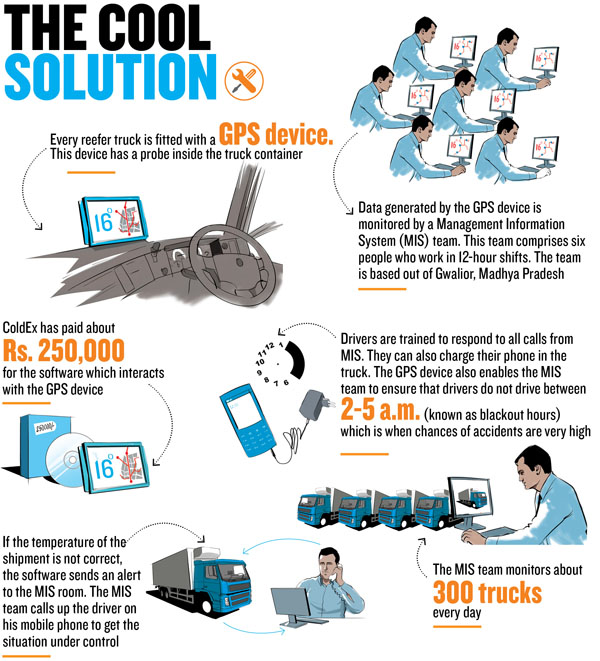 Infographic: Sameer Pawar
Now, that’s a really bold thing to say, but perhaps this is where an entrepreneur’s gut feel kicks in. Cadbury agreed to a trial run. Swastik bought 30 reefer trucks, which cost three times more than a normal one. Jain approached three banks to finance 10 trucks each, a total investment of Rs. 6 crore. “While we were scared, we told Cadbury that this is what we are doing. They said go ahead,” says Jain. In the summer of 2005, Swastik did the trial run. Cadbury was pleasantly surprised with the results. At the same price of the competition, Swastik carried 1.6 times more cargo. The effective saving on freight cost was more than 40 percent.

This is how the savings came about. The standard reefer truck in the market is 22 feet long. While this truck has a capacity of 14 tonnes, Kausar’s truck would carry only 6 tonnes because of the strong insulation which reduced the volume. “The internal space was so less that they could not fill in.

Here there was a voluminous product and that truck was built to carry meat or frozen cargo which was 80 percent of the market then,” says Gaurav.

Swastik tweaked the 22 feet long truck in three directions (length, breadth, height) to increase the volume. “Same 10 wheels, same truck, same carrying capacity, same price but with 60 percent more cargo carrying capacity for Cadbury. It was good for them and good for us,” he says.

The trick was to understand that Cadbury’s products didn’t need strong insulation. The temperature had to be maintained above 16 degrees but under 20. In the first phase of the trial run, Swastik moved Cadbury’s goods from Malanpur to South India, which is almost 2,000 km one way. Western India was next. And ever since this realisation, Swastik has moved on from one confectionary company to another, like Britannia, Nestle, Danone, Haagen Dazs  among many others, selling customised cold chain solutions. “Some people need a train, others need a bus and some need a cycle or a motorcycle. You can’t give an airplane to a guy who wants a bus. In the last five years this is what we have been doing. We ask: yeh aadmi galat kya kar raha hai, ise chahiye kya (What is this guy doing wrong, what solution does he need)?” says Jain.

Relationships matter
But Jain is not infallible.  In 2007, he decided to move one step further in the value chain—from inter city to intra city distribution. “That’s the ultimate goal; to move closer to the customer,” he says. This time around, ColdEx went with Britannia for the national launch of their curd, whose trial was scheduled in Bangalore.

It designed a new truck for doing the intra-city distribution of dairy products.  ColdEx used a homogeneous puff panel for its insulation, which is a technology used worldwide.

While in India, many companies still used an old technology which is heavier and, as a result, lowers fuel efficiency and the amount of cargo that can be carried. ColdEx had already used its technology on one of the long haul routes for Britannia and Jain claims that the drop in temperature was only 1 degree Celsius in five hours. “In secondary distribution, if you put in this material at 4 degrees then you can deliver it at 5 degrees for up to five hours. And that’s the time it takes to do a city milk run,” says Jain. The idea was good; only insulation with no reefers which meant lower cost of operations.

The idea flopped. The nature of the business was such that on delivery, the door of the truck had to be opened many times. ColdEx hadn’t factored that in, so the temperature was never maintained at 4 degrees. ColdEx went back to the drawing board. The problem was that a Tata Ace has a 16 horsepower engine and it couldn’t support a reefer. Eventually Jain figured it out. Every time the door was opened, the reefer would be plugged in at the distributor’s outlet.

What sets ColdEx apart is the organic fashion in which it has grown. There is no hurry or excitement of doing too many things at one time. A code that few others have cracked. Jain is very clear that he doesn’t want to move fruits or vegetables or meat anytime soon. He is happy growing with his partners and says the next step for him is to build a robust operating process. Over the last year, he has been working on incentive plans, automation and building capabilities of his employees.

Standing at the hotel porch, Jain reaches for a cigarette. He says there is no hurry to grow. This is the time to consolidate what has been built. “My father is my inspiration. You know, a self-made man. I am doing the same thing, Anyway what do you expect from someone who’s from Gwalior? We are pretty modest people,” he says. Is it? So what car does he drive? “Oh, a BMW 3 Series… we bought it last year.”

Show More
Thank you for your comment, we value your opinion and the time you took to write to us!
Comments 21