By slowly refining a distribution model, Greenlight Planet has been rapidly selling solar lamps to villagers who have no access to the country's power grid 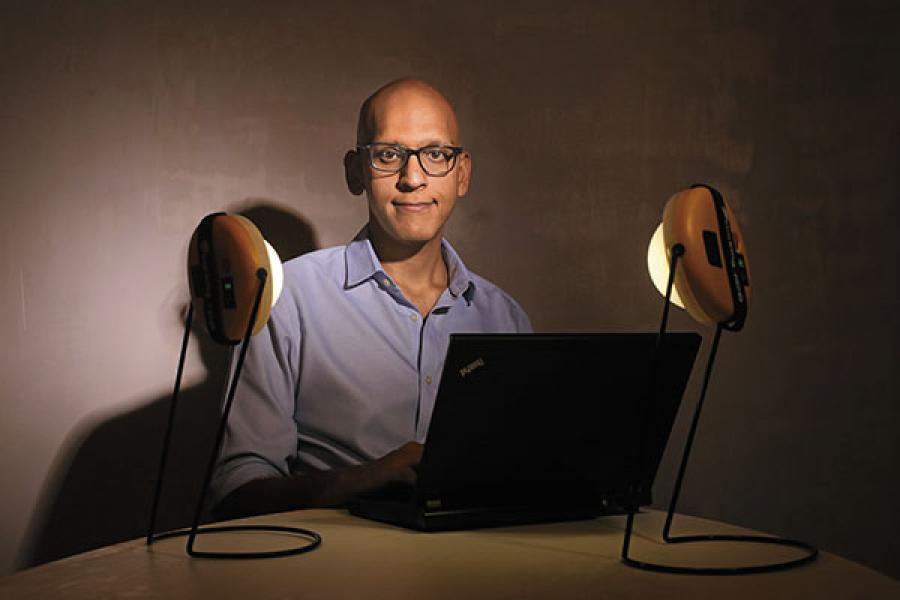 In 2007, engineering students Anish Thakkar and Patrick Walsh went head to head in the final round of a business plan competition at the University of Illinois. Thakkar’s pitch on a non-profit initiative came up short against Walsh’s idea of selling low-cost solar-powered lamps in developing countries where people living in rural areas cannot afford or don’t have access to electricity.

Notwithstanding the loss, Thakkar knew that Walsh was on to something. They decided to develop the idea into a business. The two remained in touch after graduation, even as Walsh went to China to develop a prototype of the lantern he wanted to sell.

Meanwhile, Thakkar joined the Chicago-based sales and marketing consultancy, ZS Associates, but continued to work on a business model for the solar lamp initiative on the side. Today, the 29-year-old is the chief executive officer while Walsh is the chief technical officer of Greenlight Planet—a startup they founded in 2008 along with Mayank Sekhsaria, a fellow engineering student from the University of Illinois. They started with a seed fund of $500,000 drawn from Chicago-based angel investor Prabha Sinha.

So far, Greenlight Planet has sold over three million solar lanterns to customers in rural India, East Africa and other developing countries. In India alone, it has sold 1.3 million units since it made its product available for purchase in 2009. The goal is to sell 16 million lamps by 2016.

Solar lamps harness the power of the sun to charge a battery and provide artificial light. Endowed with boundless, natural sunlight, but lacking a far-reaching or reliable power grid, the Indian market is ripe for such products. Greenlight estimates that 80-95 million Indian households still use kerosene lamps, which are a weak source of light, emit harmful fumes and are a fire risk.

But price was a deterrent. When Greenlight first started selling its units in India, it found that its main competition was not rival solar light maker San Francisco-headquartered d.light, which already had a presence in India, but kerosene lamps that are sold for Rs 200 (and an additional Rs 100 every month for fuel).

To counter this, the startup priced the early, more basic models of its Sun King line of solar lanterns at Rs 850. (In 2006, the average cost for a similar lamp was Rs 4,000-5,000.) The going was still tough: During the first four years, Greenlight sold only one million units globally. But then, business started picking up towards the end of 2011, not just in East African countries, but also in India.

Thakkar, who is based out of Greenlight’s Mumbai office, attributes this change of fortune to growing energy needs and the popularity of smartphones which are dependent on electricity. He estimates that the total market penetration for solar lanterns in India is less than five percent, of which Greenlight has a 1-2 percent share. This year alone, the company sold about half-a-million units in India. With an average ticket size of Rs 1,800, its revenues for 2014 are about Rs 180 crore. “Our sales are growing at 30-35 percent per quarter,” says Thakkar.

Greenlight’s Sun King models range from the basic ‘Eco’ for Rs 650 to its newly launched Sun King ‘Home’ (Rs 4,900), a hanging lamp with three separate lights and multiple phone-charging ports. It is 10 times brighter than a kerosene lantern. An ‘Eco’ provides 30 hours of light on lowest power and four hours on high power (twice the brightness provided by a kerosene one).

What led to this intriguing inflection point? For one, technology has improved tremendously since Walsh started developing solar lamps nine years ago. Walsh, 30, a member of the 2012 Forbes 30 Under 30, is based in Shenzhen, China, where he oversees a 25-member production and design team. In 2011, Greenlight moved from lithium-ion batteries, which last for two years, to the more durable lithium ferro-phosphate ones that have a shelf life of five years.

In Mumbai, Thakkar is scaling up Greenlight’s direct sales model and reaching out to more villages. And here, the startup’s direct sales and distribution model has proved to be a game-changer.

In November 2011, Thakkar was on a field visit to Chhapra in Western Bihar, where agents had seen a surge in sales. While he was visiting a customer in her house, a neighbour from down the road came to ask about the lamps. Before Thakkar could respond, the lady educated the man about Sun King. She said that without having to spend Rs 100 a month on kerosene, the Rs 850 product quickly paid for itself, to which the neighbour said, “Maybe I’ll get one, too”. He bought a Sun King solar lantern that very day.

“With rural customers, there’s a snowball effect: If you’re not one of the homes that bought Sun King, you’re walking down the road in the evening seeing these bright lights hanging on neighbours’ windows,” says Thakkar. “As long as the customer is happy with Sun King, he/she does a more effective sales pitch than we could ever do.”

Today, Greenlight relies largely on a 6,000-strong team of ‘field agents’ to sell its units door-to-door, and act as a bridge for after-sales service. The agents are financially invested in the products.

Initially, the startup gave units on a consignment basis, but ended up losing products or having agents sit on inventory. Thakkar and his team realised that the only way to commit agents to sell the products was to make them buy a few units rather than give them for free. This meant that Greenlight had fewer agents, but the ones who came on board had skin in the game and took their roles seriously. Once they reach their sales target, they get free units which they can then sell at a 100 percent profit.

Every week, a district manager visits villages to identify and train agents, and also bring existing staff new inventory. The managers are supplied by nine warehouses across Rajasthan, Uttar Pradesh, West Bengal, Jharkhand, Bihar, Orissa and Assam, which receive the products from China, via Mumbai. It has also partnered with 14 microfinance institutions that have networks in remote parts of India, and some of its products retail online on sites such as Amazon and Flipkart.

Logistics was a challenge for Greenlight whose core expertise was product and last-mile sales. This is why the founders tied up with Mahindra Logistics in 2014. Mahindra, which has distribution and warehousing knowledge in rural products such as tractors, gets paid per unit delivered. “One stumbling block for startups is working capital financing for warehouses, trucks, imports, etc, which large companies are better at,” says Thakkar. “If you’re running a supply chain, you have to finance inventory that’s double your current sales rate.” Mahindra finances much of the working capital in its part of the supply chain and has economies of scale to make it efficient.

It took years for Greenlight to perfect this distribution model. According to Sinha (co-founder of ZS Associates), there is very little awareness about the benefits of solar lamps. “Any distribution channel has to educate as well as sell to target customers. A retail outlet or kirana store model will not work here. The direct sales model was the only way to reach out to remote villages as well as provide knowledge and expertise,” says Sinha, who lives in Chicago.

Two years ago, Sinha and Geneva-based private equity firm Bamboo Finance invested $4 million in Greenlight, which broke even at the start of 2013. It has since raised debt from lenders, including Deutsche Bank, to finance its working capital. (Incidentally, d.light announced $11 million in a Series C funding in February 2014.)

Greenlight’s founders and investors have faith in their product, and with good reason, too. The Economist tested solar lamps from around the world for a story which was published in September 2012. “The best solar lamp among those tested was the Sun King, produced by an Indian company, Greenlight Planet. The Sun King’s almost dazzling light was appreciated by users, as was its seemingly unbreakable design,” the magazine noted, in a story titled, ‘Lighting the Way’.

But above all, Greenlight is dependent on the entrepreneurial streak that is inherent in every Indian. In the startup’s nascent years, Walsh travelled to a few villages in India with prototypes, which he was selling for Rs 1,000 each. One villager immediately bought two units. “When I asked the customer why he had bought two, he replied, ‘Because my neighbour would want the other one, which I will sell to him for Rs 1,500’,” Walsh says. This incident convinced the founders that their company would grow strongly on the shoulders of rural India.