Vishal Gondal: The Ideas Man is Onto a New Trend 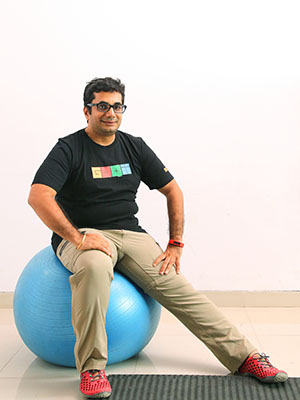 Image: Joshua Navalkar
“I’ve learnt that if they tell you your idea is stupid and is not going to work, you are on the right track”

Vishal Gondal is a restless soul. He exudes an unquiet perhaps expected from serial entrepreneurs who are buzzing with ideas and want things done at the speed of light. Entrepreneurship is all about “failing fast and moving on to the next thing”, he says. But failure is not what the man, who founded India’s first and largest mobile gaming company, eventually selling it to Disney for $100 million, can be charged with.

However, an hour-long conversation later, it isn’t difficult to spot Gondal’s quiet inadequacies—his inability to adapt to a “manager-run thing with no real opportunity to build anything new”, his dispirited attempts at understanding “balance sheets and future projections” that often define a company’s vision and his impatience with hierarchy and “corporate structures”. In mind, body and soul, he belongs to an entrepreneurial culture that believes in incubating as many new ideas as possible, as opposed to “analysing, justifying and making presentations on a single idea” for days together.

And thus, the 38-year-old entrepreneur, after quitting as the managing director of DisneyUTV Digital in April 2013, has started up again—15 years after setting up the successful Indiagames. GOQii (pronounced Go-Key), his new venture, is a wearable technology company that seeks to create a health care ecosystem. “We are not just a device company. We are a service on top of a wearable device, and we are motivating you to make a lifestyle change,” says Gondal, GOQii’s founder and CEO.

The GOQii ecosystem consists of a fitness band (manufactured in China), an app available on Android and Apple, a slew of health coaches, including dieticians, nutritionists, physical instructors and behavioural psychologists, available 24x7 on the cloud, and Karma Points—a virtual currency for social good—which users can donate to a noble cause listed by Oxfam, an international non-profit that has tied up with the company. That is many things rolled into one.

“Sounds crazy, no?” he asks. “That’s exactly what people told me when I started making mobile games in 1999. I’ve learnt that if they tell you your idea is stupid and is not going to work, you are on the right track. Flipkart must have been a crazy idea at one point. redBus, MakeMyTrip, Justdial… were ideas that must have been shot down by many investors. But someone took a gut call and knew that they were winners. It is only the crazy ideas that end up in great results.”

His long-time friend and venture capitalist Mahesh Murthy (whose firm Seedfund was among the first to spot online ticketing startup redBus) commends Gondal. “He has all the qualities of a successful entrepreneur—a devil-may-care attitude, the ability to do things fast, the ability to network, and the willingness to fail and learn. He’s surely one of the entrepreneurs to emulate,” says Murthy. “But with GOQii, he might be in a difficult space with a narrow demographic. Investors ideally want to back something that can become dominant. There are many good fitness devices in the market already,” he adds.

GOQii, which opened to consumers in August after three months of beta-testing, competes with the likes of Nike FuelBand, Fitbit, Jawbone, Google Fit and Samsung Gear Fit internationally. In India, there is GetActive, a Bangalore-based startup that offers a health monitoring wristband which tracks caloric burn, activity levels, and sleep patterns—pretty much the same things GOQii does, minus the health coaching. And that promises to be the differentiator.

“The power of coaching is more than the power of the device,” says Seedfund’s Murthy. “GOQii needs to move from hardware to a health coaching app that is platform-agnostic and independent. That could become an attractive investment opportunity.”

GOQii seems to be on track then. “We won’t be restricted to any band,” says Gondal. “We’ll eventually have all bands connecting with our service. We’ll have open APIs for that.”

The company, headquartered in California with offices in Mumbai and Shenzhen (China), launches in the UAE in September and in the US by the end of the year. Gondal has assembled a team of doctors, designers, sales and business professionals. He’s also raised an undisclosed amount in angel funding from Google’s Amit Singhal, Dell’s Kanwaljit Bombra, Microsoft’s Vijay Vashee and most recently, WhatsApp’s Neeraj Arora and Amazon’s Marco Argenti. (Forbes India sent mails and messages to Singhal and Arora, but did not receive any response till the time of going to press.)

But because India is not traditionally fitness-oriented, low adoption rates can pose a challenge. Plus, the GOQii subscription package (Rs 6,999 for half-yearly and Rs 11,999 for yearly) doesn’t come cheap. “It is competing in an ultra-premium segment of the consumer class. In a society that is not fitness-conscious, it will have very low penetration,” says Milan Sheth, partner & national leader – technology, Ernst & Young India.

“Moreover, there are plenty of free apps that offer body data fairly accurately. So, why should someone pay for an expensive GOQii package? Though it is marketing itself as a health coach, and the philanthropic angle is very innovative, fitness devices can never substitute real health care. Doctors will still prefer medical tests for any diagnosis,” he adds.

While the industry is cautious, Gondal remains unfazed. “When I started Indiagames, people thought I’d gone nuts. They said, ‘Mobile game kaun khelega?’ [Who will play mobile games?] Who will put money in that? See what the world has come to! I’ve always believed in the next trend. And the next era of innovation will happen in the health and fitness space,” he says.

He certainly has the numbers going for him. According to Accenture’s Digital Consumer Tech Survey 2014, 80 percent of Indians are keen on buying fitness monitors. Worldwide too, demand is soaring. Technology research firm ON World estimates that 250 million wearable health and fitness sensing devices will be adopted by 2017. That is more than the adoption rates for smartwatches and internet-enabled glasses. “There will soon be implantable chipsets in your body. Devices will become redundant,” predicts Gondal.

How different is 2014 from 1999, when startups and internet companies were unheard of in India? Says Gondal, “The one good thing that has happened is now there are people you can talk to. A startup ecosystem is taking shape. There are 20 other entrepreneurs who have started and shut companies. Venture capitalists have had successful exits. And there are more people willing to bet on crazy ideas.”

Is GOQii one, then?

“I think we are out to create a multi-billion dollar company and an entire industry of what I call remote health professionals,” says Gondal. “At GOQii, we are actually creating a new itch instead of satisfying one. We’ll end up creating a category and prove things that are yet unproven.”