Learn From the Master Strategist

Letter from the Editor: There's a great deal to learn about high performance, competitive strategy and teamwork from Anand's career as the reigning world chess champion

When you picked up a copy of this edition, I bet you wondered why Vishy Anand was on the cover of Forbes India. He may have very little to do with the world of business, but there’s a great deal that business executives can learn about high performance, competitive strategy and teamwork from Anand’s incredible career as the reigning world chess champion. There’s one more thing I truly admire about him: in the cold and fiercely competitive world of chess, Anand is still able to retain his human touch. He is the quintessential Mr. Nice Guy, whom even his rivals can’t seem to hate! 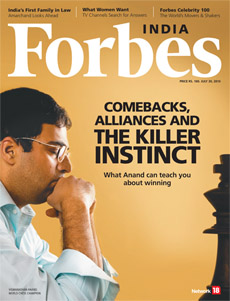 A couple of weeks ago, Vishy was gracious in spending time with my colleague Ashish Kumar Mishra in his beautiful duplex apartment at RA Puram in Chennai. Ashish was an unusual and somewhat risky choice for this interview: He has no clue about the difference between a Sicilian Defence and a Latvian Gambit, but he did the next best thing: he prepared thoroughly before the session, thanks partly to some quick coaching from our resident chess expert from Chennai: S. Srinivasan, our head of desk. The conversation with Anand is so rich in insights, engaging and accessible (even if you don’t follow the game) that we decided to put it on our cover. Anand is a true champion — and I’d urge you to read his incredible rise and fall — and rise to the very pinnacle of achievement.
There are some more surprises in this edition too. Our feature story on the crisis brewing inside India’s first family in law is a compelling read. Shloka Nath did some incredible amount of research before talking to both Shardul and Cyril Shroff, the two hugely influential brothers who head Amarchand Mangaldas, India’s biggest law firm. Her story offers an interesting — and unusual — window into the world of Indian law firms.

I’d also urge you to read Associate Editor Mitu Jayashankar’s sharp story on Titan, a company which has quietly transformed itself from a watch manufacturer into a predominantly jewelry maker. She chronicles how CEO Bhaskar Bhat regained the trust of his board after a disastrous and costly attempt at going global in the mid Nineties.

Every creative organisation needs to reflect and renew itself from time to time. We did exactly that a few weeks ago. There’s no better place than Goa in the rains. And our three day off-site was a great way to review the last year, plan for the next one and also have some fun together. If the passion and energy on display was any evidence, you can count on this team to deliver one blockbuster edition after another!

Tweets by @forbes_india
Dilip Chenoy: We Have Created A Brand India
How Much of the Reality Show is Scripted?