Letter From The Editor: A Change of Heart

If money is prudently spent on some of the country’s most pressing social problems, it could really make a difference to the lives of millions of Indians

These days, any conversation on Corporate Social Responsibility (CSR) tends to evoke a very strong response. That’s because there is a large section of business leaders who believe that the government’s move to force companies of a certain size to spend at least 2 percent of their profits on CSR is completely out of line. 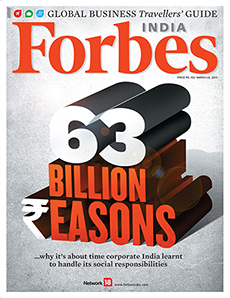 There are many reasons that are put forward to support this line of thinking. And it is hard to argue with many of their concerns. One, spends could be utterly wasted in disparate activities that yield little or no social good. Two, this could potentially take the focus away from running the core business. Three, this is a case of abdication by the government. And finally, businesses are already doing enough by creating jobs and wealth. So why force them to do more?

By now, it is clear that the proposed Bill will become law, possibly by the end of the year. And that’s why we believe that the time for debate is now over. If large sections of India Inc are forced to adopt this so-called ‘CSR diktat’ even while kicking and screaming, the final outcome won’t be hard to guess.

The sums of money that are involved are sizeable. CSRidentity.com estimates it at Rs 63 billion for the top 500 listed companies. The number could be a lot higher, if the larger universe of multinational companies operating in India, mid-cap companies and SMEs are included.
Now, here’s the upshot: If that kind of money is prudently spent on some of the country’s most pressing social problems, it could really make a difference to the lives of millions of Indians.

The good news is that there is a relatively small section of CEOs who are refusing to get mired in this CSR debate. Instead, they’re focusing their creative energies in crafting a CSR strategy, thinking about the relevant aspects of governance, galvanising their teams—and also setting up ways to measure outcomes. In other words, they’re building a ‘business plan’ for CSR, in much the same way that they run their business. In this cover story, we’ve tried to learn from the experiences of these firms.

Tell us what you think about the story—and the rest of the edition. As always, I’d love to hear from you.