Letter From the Editor: Change the Game

One of the simple joys of being a magazine journalist is the sheer opportunity we get to spend hours researching successful, high-performance companies and their CEOs. And over these two decades, there are two seemingly dichotomous things that I’ve learned about what makes the best CEOs tick. One, they tend to have this incredible energy and courage of conviction in their strategy and in the power of the organisation to lift its game. Without that, I guess it wouldn’t be possible to make extraordinary things happen. Yet, at the same time, they tend not to become dogmatic about their strategy. They have an uncanny knack of knowing when their game is coming to an end—and it’s time to reboot strategy. 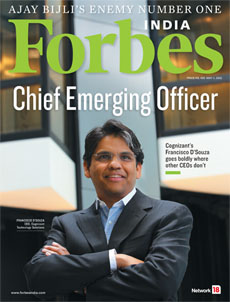 When you sit down to read our cover story on Cognizant’s 43-year-old CEO Francisco D’Souza, remember to pay careful attention to both these aspects.

Under D’Souza, Cognizant has set a scorching pace in the IT industry. It overtook Wipro last year—and seems poised to go past Infosys sometime this year. You would imagine that this is the moment that D’Souza would simply press on the accelerator—and go for broke. Not quite. Instead, D’Souza has quietly latched onto a whole new game. Mitu Jayashankar and NS Ramnath, who’ve tracked Cognizant’s every big move since Forbes India was launched in May 2009, say the manner in which D’Souza has recast the company—and is now leading the charge from the front—is quite extraordinary. Their story, on page 42, takes you deep inside this re-invention of one of India’s most successful firms in recent times.

P.S. Here’s an alert: On the occasion of our third Anniversary, we’ve got a special double edition coming up next, which includes essays by an amazing galaxy of thought-leaders and business leaders (see details on page 62), plus a carefully curated collection of our best feature stories published in the last one year.

Tweets by @forbes_india
David Davidar: Aleph Books Will Be Competitively Priced
Here's Where You Can Drive As Fast As You Want