Taking stock of investment performance is tricky business. Here's how your columnist fared with the stocks he has recommended

One may be forgiven for thinking that the investment profession and navel gazing have little in common. Funnily enough, the reverse is true. The recognition that measurements of performance are statistics leads to an appreciation that each data point must be seen not as an exact number but rather as a “good approximation” of the number.

Three major factors affect the numbers that are intended to measure investment performance. First, “sampling error” is the likelihood that the numbers do not accurately represent the facts. Given a specific time period, the performance data may not be a representative sample of the manager’s style and ability. Second, market conditions may have been highly favourable or against the investor during the period of measurement. Third, do the numbers capture luck or skill? Nassim Taleb suggests it would require more than 50 years of observations to conclusively infer that even 3 percent incremental annual return is the consequence of superior investment skill rather than dumb luck!

Performance measurement has meaning only when seen in relation to a clear and explicit investment policy. However, seen in this context, there are a number of practical problems with a quantitative assessment of investment performance. Importantly, while past patterns are typically our best available guides to likely future patterns, the future is bound to differ significantly from the past. Further, mean reversion acts as a powerful drag on corporate performance and valuation metrics. Not surprisingly, the extent of “drift” in these relationships is far less for large, established companies as compared to the smaller companies. So, portfolio composition matters a great deal over time but not in the short run. Equally, just one or two decisions — perhaps remarkably skilful, perhaps plain lucky, maybe both — can make a huge impact on portfolio performance in a given period. Last, but certainly not the least, the choice of starting date and ending date is something to watch out for.

Given these quirks, the numbers typically lead users of the data to think counter-productively. It is more helpful to figure out whether the investment manager “does as he says”. Is the basis for investment behaviour consistent with common sense? Most often, these “soft” cues act as a leading indicator of the performance trends highlighted by the “hard” data. 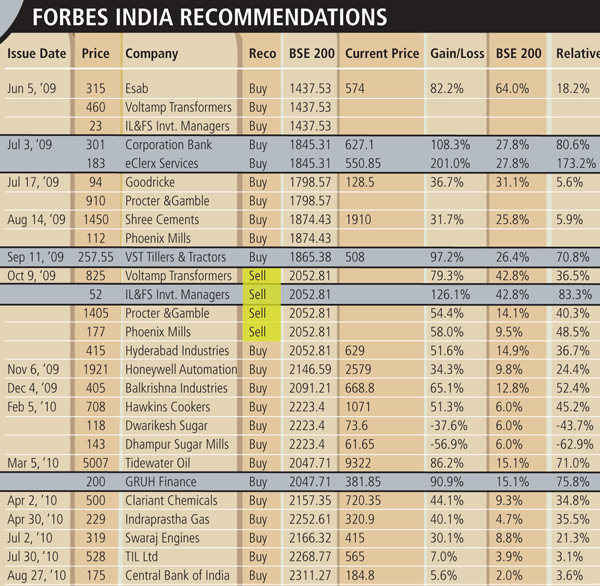 Infographic: Sameer Pawar
Seen in this light, how has your columnist fared? The table above lists 23 recommendations in chronological order including the ones that were sold (highlighted in yellow). Considering the absence of large cap stocks as well as micro caps, the BSE 200 is probably the closest version of a representative benchmark. Stated simply, the solitary intent has been capital preservation by purchasing businesses with predictable economics run by honest and competent managers at a price that affords a meaningful margin of safety. So, what can be gleaned from the data?

First and foremost, I got lucky! As Buffett points out, “a rising tide lifts all yachts”. Considering that the market has been headed north without a break since the start and mid-caps have done particularly well during the period, yours sincerely was in the right place at the right time.

Does the portfolio reflect consistency in thought and action? With two notable exceptions — Dhampur Sugar and Dwarikesh Sugar — the answer is yes.

What are the lessons to be learnt from these inexcusable lapses in judgment? First, valuation always needs to be linked to long-term historic trends rather than seductive margins in future. Second, always search for what can upset the apple-cart. In this case, rising inflation led to populist policy which wreaked havoc on the sugar industry. If one had invested in each of the recommendations on an equal weighted basis by value, the reader would be up 55.9 percent on August 20, 2010, as compared to 18.6 percent for the BSE 200. Excluding the three best recommendations would lower returns to 37 percent.

Where to from here? Declining fundamentals for two companies in the portfolio — Goodricke (Rs. 129) and Shree Cements (Rs. 1,910) — suggest the need to bid adieu with minimum fuss. Samuel Goldwyn was smack on target in saying “forecasts are difficult to make — particularly those about the future.”

Disclosure: This column is neither an offer to sell nor solicitation to buy any of the securities. The author frequently invests in the shares discussed by him.