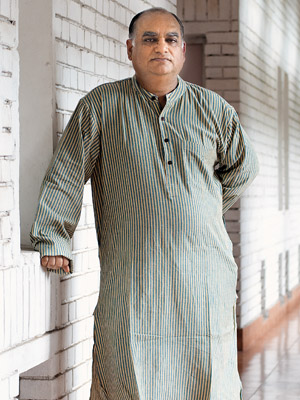 How serious is the crisis at BASIX? Some media reports say the company is on the verge of closure.
The only correction (to the media report) is that it seemed to think we are dead. All we’re saying is, if things don’t happen, we’ll certainly die. There’s a difference between the two. We’re very much alive and we’re trying our best to avert death, but we’re realistic enough to predict it. Merely because someone is confronting the reality, it’s seen as a prediction of doom. It’s not. It’s looking the situation in the eye and then doing what we can.

Did you foresee things will turn so bad?
Certainly, I thought there will be problems and that’s why I took a number of initiatives including establishing MFin as an industry association way back in December 2008. But I never imagined that the problems would get such an adverse response from the most important state where everybody is located and that it would lead to this kind of a law which makes it impossible to function there.

You had a 99 percent recovery rate even in Andhra Pradesh, so what changed?
Throughout 2009 and 2010, growth of microfinance portfolio, particularly in Andhra Pradesh, was led by the fact that SKS went for an IPO. They wanted to show high growth and high profitability. The way to maintain high growth and high profitability is by concentrating in the same geography and increasing the loan size to the same customers.

Share and Spandana followed suit. This led to multiple lending, which in turn to over-indebtedness, which in turn led to all kinds of problems including allegedly coercive recovery practices, alleged suicides by borrowers. That became politically very difficult for the ruling party to justify. They had to take stern actions against MFIs.

That political mandate was then used by a group of civil servants who were in favour of the self-help group (SHG) model and introduced provisions resulting in a dramatic fall of repayment. Reacting to that, opposition leaders led by Chandrababu Naidu went to people and said, the ordinance is nothing, it has not reduced your interest rate, it has not reduced your debt burdens, you’re supposed to get interest at 3 percent per annum and so on. People basically took that as a license for not repaying. The government action and secondly the fermenting of mass default by the opposition led to a situation where repayment rates have fallen down to less than 10 percent.

Given that micro finance benefited the customers, what happened to customer loyalty?
It’s a combination of short-term gain and brainwashing by the government. Andhra Pradesh government has a dense SHG programme running for the previous 10 years and as far as poverty alleviation and women empowerment programme goes I think it’s a world class success. But there is also this view that anything else is wrong. What should have just been a debate and thorough assessment of two different methodologies to reach the poor has been converted into an ideological battle. There’s no other person in India who can say this except me because I am involved in the founding of both. I know the strengths and shortcomings of both. But here, people are using their official position to kill the other side.

What are the chances of recovering the bad loans in AP?
I have to speak of BASIX separately from other MFIs. Although we are in the same class, our methods are different. Half of our customers are men, farmers. We give crop loans where recovery only happens after the harvest and there’s no weekly repayment. We’ve had several droughts in Andhra Pradesh and we’ve recovered loans in the following year or the year after that.  We know that poor people left to their own devices, would like to maintain their credit. Second, we provided livelihood services like vocational training and we keep going to those villages anyway so, unlike these other people who simply gave a loan and came every week to collect an instalment, I’d say our relationship is different. In a few months time we’ll see better prospects, but the issue is, will we be around after a few months?

What are the investors saying?
In general, investor sentiment is pretty down. Private equity has pretty much walked away from this sector even though just a year ago they were very keen. [This is understandable] because the political risks have become so high that the underlying risk is unpredictable.

Despite the RBI regulations?
It’s like a highway has been built for microfinance in the future but the access to the highway has a big ditch, which requires 7,000 crore to fill. That’s the ditch caused by the Andhra default.

You were also trying to tie up with banks to share your network and get funds in return?
We’re in discussions with eight or 10 banks and in very advanced stages. In some places we have started the network. But it will take time to generate enough income from those to recover this loss. That’s a good long-term survival strategy and long-term reengineering strategy. But it doesn’t take care of the Andhra Pradesh hole. The capital adequacy issue is immediate.

Would you reach out to HNIs?
I would certainly like to meet Kumar Mangalam Birla because he was in the Malegam committee and he suggested there should be a social fund for MFIs. I’m pursuing a 100 different survival tactics. As long as they are legitimate, I’ll try anything.

Tweets by @forbes_india
Financial Inclusion: The Road Ahead
Podcast: Cracks In the Republic