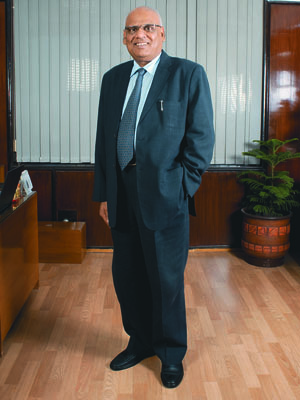 S.K. Roongta
Title: Former chairman, SAIL and International Coal Ventures Limited
Age: 60
Career: Started out as a marketing executive in SAIL; he is now a member of the Executive Committee of the World Steel Association, and many other top steel-related bodies
Education: An engineering graduate from BITS, Pilani and a PG Diploma holder in International Trade from IIFT, New Delhi
Interests: Reading management journals and listening to bhajans

How has SAIL evolved over the years and how has it taken on the competition from private sector in recent times?
When I joined SAIL, pricing and distribution controls were invoked. It was a seller’s market and steel was a controlled commodity. We were not even supposed to meet customers over dinner. The major changes happened post 1991 when the controls were demolished and anybody was allowed to set up plants since then. During this period SAIL discovered itself and took on the competition. We signed several MoUs with our regular customers which helped foster customer relations. We also gave clean credit to customers — a rather risky proposition in those times.

The real competition came up in the mid-1990s, especially in flat steel products. This was also the time when the East Asian Crisis came up. There was a glut of steel in the market and there was excess production in India. SAIL re-oriented its marketing by engaging in long-term relationships with the customers. I have always believed that if you look after a customer in times of difficulty, he will become a permanent one. SAIL was also perceived as a fair supplier over a period of time.
The production team also developed new varieties and there was a focus on value added and special steel. We used to produce about 1 million tonnes of value added and special steel till five years ago, and today the figure has crossed over 4.5 million tonnes.

There has also been some criticism over the massive cost escalation in your modernisation programme...
The corporate plan 2012 was launched in 2004 [according to] the prices then. In 2006-2007, the world market started booming and many steel companies across the world were facing a capacity crunch. Therefore cost estimates made earlier could not validate the increase in prices subsequently.

SAIL has also entered into several joint ventures, including one with Posco. What was the vision behind these?
The Posco JV [joint venture] is yet to come into being. We have entered into another JV with JaiPrakash Associates for cement plants in Bhilai and Bokaro for which we will provide slag. There’s another JV with Tata Steel and one with Shipping Corporation of India for imported coal consignments. These JVs will help us utilise all our resources to the maximum.

Will steel prices become more stable in the days to come?
The Indian market is aligned closely with the global market. There has been a high degree of volatility in the last four years. There have also been fluctuations in the prices of iron ore and coal. The point of concern here is that due to shortages nobody should be able to take advantage. But in India, we now have adequate capacity and, with imports, there is no cause for such shortage in the country. The extreme volatility in 2008 was on account of the demand in China. Capacity utilisation in plants across the world had touched over 90 percent. I don’t think prices will reach those levels in the near future.

Tweets by @forbes_india
The Price of Poor Regulation
Is There Such a Thing as The Seven-Year Itch?