The Dawn of Reverse Innovation

Vijay Govindarajan is the Earl C. Daum 1924 Professor of International Business at Dartmouth’s Tuck School of Business and Director of its Centre for Global Leadership.

You just wrote an article for Harvard Business Review with Jeffrey Immelt, the CEO of General Electric (GE), and your associate, Chris Trimble. What was it about?
Historically, global companies innovated in their home markets, the developed world, and took those products into developing countries. We wrote about “reverse innovation”, which is just doing the opposite — innovating in emerging markets and then bringing those innovations back into developed countries. That’s the opposite of “glocalization” (a hybrid word formed by merging global with localization), the big idea in the 1990s, which has been defined as “thinking globally and acting locally”.

Did glocalization stop working?
The reason that glocalization worked historically is that American companies were taking their products into Europe and Japan (where the customers were similar to US customers). That approach does not work in emerging markets because the whole market structure and the customer problems are so fundamentally different. For example, just take the GDP per capita in two countries, the US and India; there is no product in the US, where the mass market per capita is $50,000, that can be adapted and sold in India, where the mass market per capita is $800. 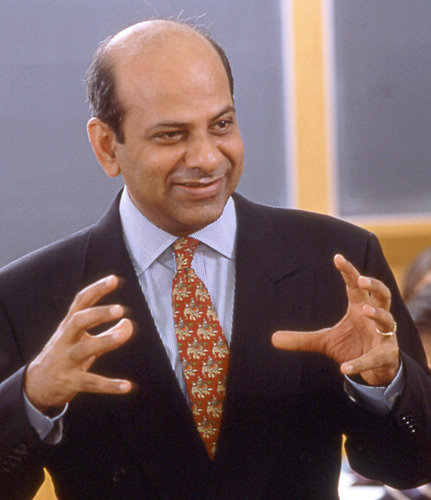 One of the remarkable things about General Electric is that it is a hundred-plus year old company, and the only way a company can survive that long is if it obsoletes itself in terms of products and solutions. This is the real hallmark of GE: that they are willing to change; they are willing to embrace new ways of competing. To that end, every effective CEO puts a new strategic frame on the company he or she leads — not because the old frame was irrelevant but because it’s a new environment, it’s a new world. The strategic frame that Immelt is putting in place (without losing the performance and discipline that Jack Welch put in place) is adding innovation to supply. Immelt’s legacy will be judged by how well he was able to incorporate innovation inside a company known for efficiency.
You have a unique role inside a modern corporation, professor in residence. How did that happen?
About 10 years ago, I gave the keynote address at a conference at which Susan Peters, the Chief Learning Officer of GE, was also a speaker. I really enjoyed her talk, so I congratulated her on it. She, in turn, asked me what kinds of things I work on, and I told her about my work on reverse innovation. About five years later, I met Immelt when he gave the commencement speech at Dartmouth College, where I have been on the faculty of its Tuck School of Business for some time. I had a half-hour meeting with him, during which I told him about my work in innovation. So, when Immelt and Peters were talking about bringing in an academic to push their thinking, my name came up. It was kind of a series of fortunate accidents, and I think very few academics get this kind of an opportunity.
What’s your job at GE?
My role consists of three things — to teach, guide and consult. I teach the top 600 officers of GE about the best thinking in innovation. The difference between the guiding and consulting parts is that I work more deeply on a few projects when I consult, whereas, when I guide, I am talking to a number of GE executives about issues on their plates. There is no typical day. That is the beauty of this work with GE. It’s been probably the most intellectually challenging growth opportunity I have had.
Did that surprise you?
What really surprised me is that I never thought that one person could have an impact, particularly on a large company such as GE with 300,000-plus employees. Amazingly, I found that, as an outsider, I have some strength that an insider does not have even though I don’t have a big title there, I don’t have a big budget and I don’t have a big business to run. I think I can make a difference at GE mainly because I am coming in as an academic; people know that my viewpoint is, thus, unbiased.
Might you be tempted to take on a fulltime GE role, if offered? Do the big titles and budget tempt you at all?
Actually, this role has only convinced me I don’t want those things. As the saying goes: those who can, do; and those who can’t, teach. I can’t, so that’s why I started teaching. In some sense, if you become an insider, I believe you lose your power base. As an outsider, you have no axe to grind, therefore people listen to you, whereas an insider does not have that luxury.
Sounds like you have stayed true to your roots.
Everybody’s formative years are important in guiding them and shaping them. My grandfather was a huge influence on me, and his biggest influence was to lift my ambition. He really made me believe that I could do anything that I dreamed of, so to speak. So he inculcated that ambition in me, and I think that is what probably has carried me all the way here, even to this GE opportunity. I could have been comfortable as a college professor, but just stepping into GE really lifted me to another level.
You have been named to each Thinkers 50 list since 2005, including the one just announced in October 2009. What are your thoughts about that achievement?
It’s obviously a great honour, but also a very humbling experience, because whenever you are put on a list like that, people think you know a lot. In fact, one of the things I have found is that the only way you can be at the cutting edge as a thinker is if you are humble; and only humble people know how to learn, because they know they don’t know a lot. So, in some sense it’s an honour, but it’s also a feeling that I have a lot more to explore and learn.
And you probably explored and learned a lot writing your next book, Great Idea, What’s Next.
The big idea behind Great Idea, What’s Next is that most companies don’t lack for ideas. What happens is they mistake innovation for creativity. Innovation has little to do with how creative you are. Innovation is about commercializing creativity. As Thomas Edison, the great innovator, pointed out, innovation is one per cent inspiration and 99 per cent perspiration. Inspiration and creativity are what people get wrapped up in (and there are a lot of ideas in companies!), but the 99 per cent perspiration is what they forget. So this book is about that critical 99 per cent. How do you take an idea, an innovative idea, and then make it into a successful commercial business?