'We've lost the warmth in the industry': Ajay Devgn

Actor-director-producer Ajay Devgn looks back at a career spanning over two-and-a-half decades, and says he is a content man 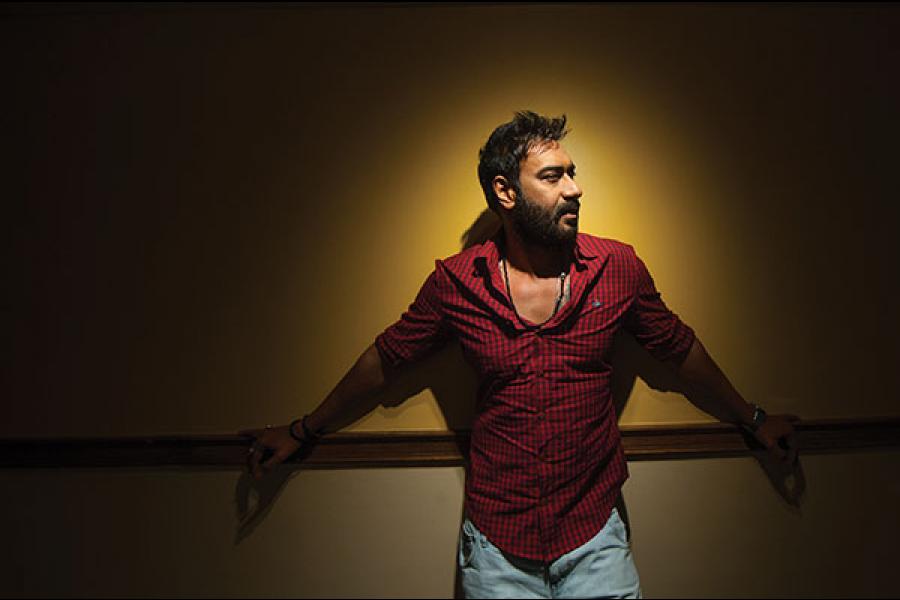 The reason why I am in the industry is because of my father Veeru Devgan. He was a very big action director as well as a much respected man. As a result, I got my start in the profession when I was only 11. That was when I started editing films.

I don’t recollect much about those early days but I soon graduated to making my own films when I was about 15. Here, I did everything. I was the cameraman, the editor and the director. Everything that happened behind the camera, I did. These were almost full-length films of 1-1.5 hours each. I wrote the scripts and shot them. There were several that I had done but I remember one horror film and one action film. Unfortunately, I have lost them now.

I got my first break when I was 18, when I became an assistant to [director] Shekhar Kapur. He picked me from out of nowhere as he was impressed with the films I was making. My next big break came when one of my dad’s friends came home and said, “Why don’t you do a film for me?”

That was around the time I had been working on my action skills but I had no inkling that I would start acting so soon. I told him that I am only 18 and I don’t want to start working now, but he would have none of it. He practically forced me and, within a month, I started shooting. And so the journey began with my first film Phool Aur Kaante.

When the film released, it became a superhit and then there was no looking back. I also received a Filmfare Award in the best debut category and there was that sudden spurt of fame.

To be honest, I was too young to understand it, and by that I mean it didn’t affect me. Those were different days. The media was not so pervasive and we could more or less do our own thing. We were all very grounded and did not allow it to get to us. We were just having fun. We didn’t even remember when our film was done. At that time, we were also not concentrating on acting. It was just fun.

After Phool Aur Kaante, I received several offers and all of that culminated in me getting the National Award for Zakhm (1998). That was about the time I believe things really started falling in place for me. There was Hum Dil De Chuke Sanam (1999) that became a superhit and audiences started to accept me as a mainstream actor.

When Everything Changed
That was when my career changed but it was also when everyone’s career changed. Let me explain. It was around the turn of the century that the film industry started becoming more corporatised. Gone were the days when plans were sketched on a piece of paper and filming began. Now, there were proper business plans and people tried to target specific audiences and cater to specific regions and so on. There were some films produced only for multiplexes, some only for cities.

If I were to put it in one phrase, “everything became a contract” and somewhere we lost that warmth in the industry. I would do films to preserve relationships. It is not something I would do now and I don’t think anyone would do it now. It just doesn’t work—you will not give it your best shot and the film won’t make money. So, there is no point.

This was a change that happened about five years ago. Earlier, contracts were signed after the film was released and they [the contracts] were mainly for tax purposes. Now, there are 100-page contracts even before the release of a film. Earlier, we would shoot 4-5 films a day, spending two hours on each set. We didn’t know when those films would release. Now, there are few actors who do more than one film at a time.

I think there was little I had to do as an actor to prepare for it [the change]. Your basic skill stays the same. Everything fell in place for me, particularly after Zakhm and Hum Dil De Chuke Sanam, due to luck and hard work.

As an actor, I don’t think I would do anything differently as I have always done things on my terms and conditions. There are so many things people tell me—for instance, I don’t promote myself and that is required for the job I do. There are people who tell me that I don’t go to events, I don’t go to parties. But I have always lived life on my own terms and I will do what I want to do and what I like to do, not what people want me to do. Finally, I am happy as I have done everything my way and still am where I am. A typical day for me starts at the gym. Then, I work for 6-7 hours and get back home by 7 pm.

The last decade also saw me expand my repertoire. I have moved to working on comedy films like Golmaal (2006). Meanwhile, I continued with the genre of drama like Omkara (2006), Company (2002) and The Legend of Bhagat Singh (2002). I also continued with my regular action roles. A lot of people ask me how I managed to straddle both genres. I consider myself fortunate at having been accepted by audiences in both types of roles. It allowed me to get out of my comfort zone and push my boundaries.

Different Hats
While I may have achieved a lot as an actor, I am equally serious as a director. I have helped a lot of people with their films without taking credit for it. I started my production house in 1999 with Dil Kya Kare and Hindustan Ki Kasam. Most of the films made money but one notable failure was Raju Chacha (2000). It did well but it went beyond budget and didn’t make money. In those days, you took the hit personally but it didn’t affect me. I just had to work harder to pay off everybody.

As a producer, I have a lot of films in the planning stage and this is where I look to focus during the next 10 years of my career. I plan to wind down my acting commitments, having only one release every year and then one every two years. Either way, I will always remain in the film industry as it is the only thing I have known. At 45, I am content with what I have achieved. Most of my free time is spent with my kids or planning my next project.

When it comes to your movies making big money, I think people’s views change when they turn producer. As an actor, you want your films to do well. In fact, I would say that everyone who says he is not a fan of the Rs 100-crore club is lying. Deep down, you want your film to be appreciated. It is not about the money but when a film makes those numbers, more people come in and it is about the appreciation. When you work hard, you want more people to see it and appreciate it.

From a producer’s standpoint, it is different—actors become producers to make the cinema they want to make and that, for sure, is not about the Rs 100-crore club. Everything has a budget and if I am making a niche film I know it will work only in certain theatres and it may make Rs 40-50 crore. Then I have to make the film within Rs 10 crore. It is all about economics and not about the money the film makes. However, the high from a large grossing film doesn’t last as long as the high from good cinema.

Tweets by @forbesindia
A different stardom: Celebrities in a world before now
Ranveer Singh: A force of nature