The cult of Shahid Kapoor 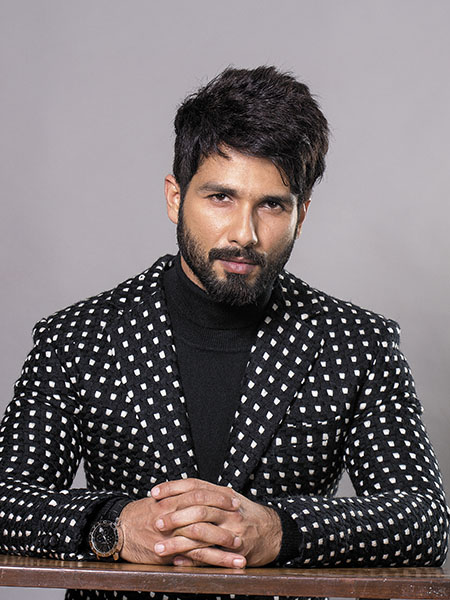 Shahid Kapoor admits to being stuck in a rut at the start of his career. But as cinema changed, he evolved into a fine actor
Image: Mexy Xavier

Shahid Kapoor walks into his Juhu office with energetic strides. There is no sign of fatigue from the frenetic promotions for his film Padmavati. We are meeting in mid-November, at which point the movie is still set for a December 1 release. (This was, a few days later, put in limbo after escalation of the controversies over alleged factual inaccuracies in the portrayal of history by the filmmaker, Sanjay Leela Bhansali. At the time of writing this, approval is still pending from the Central Board of Film Certification.)

At this juncture, though protests about the movie are ongoing, the matter isn’t as dire as it was when we met the actor, dressed in all black—a full-sleeve tee and knee-length shorts. In fact, he’s sporting his own recently-launched athleisure brand, Skult (a portmanteau of his initials and ‘cult’).

However, the celebrity status wasn’t served on a platter to Kapoor, even though he was born to Bollywood, the legendary Pankaj Kapur his father. In the early years, he recalls being “stuck in a rut”. After the success of his debut film, Ishq Vishk (2003), a teenage romcom that became a sleeper hit, and the commercial gains from Sooraj Barjatya’s Vivah (2006), a family melodrama panned by critics but lapped up by the masses, the actor was involved in several forgettable films.

“I came in at a time when the old was giving way to the new. But the new hadn’t really found itself. There were no [new] filmmakers; there was no written word that was fresh and different,” says Kapoor. “I went with what I felt was the right thing to do till, one day, I just told myself that ‘I’m done’. I am going to do what I want to do.” 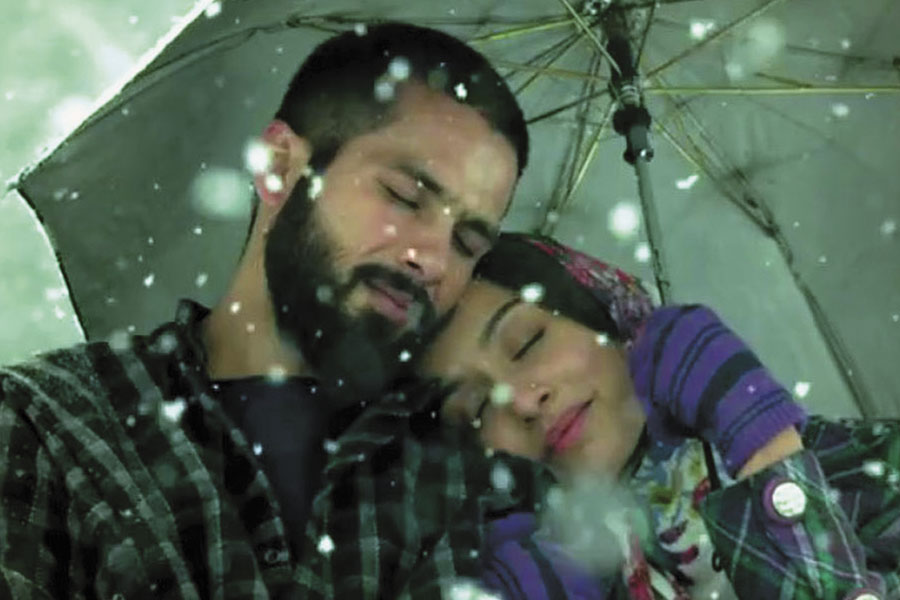 Shahid Kapoor in Haider, one of his most acclaimed performances
Image: Viacom18 Motion Pictures


That seems to have worked for Kapoor, 36, who has earned critical acclaim as well as mass popularity, across genres and generations. “Shahid has the unique distinction of continuing to stay relevant not just across the number of years or films that he has done, but also relevant to the changing times and the preferences of the audience, especially the youth,” says Vikram Malhotra, CEO, Abundantia Entertainment. “He has attempted new characters, been part of genre-breaking films and clearly managed to stay ahead when it comes to picking up the kind of work that he does.”

In hindsight, the actor counts himself “lucky to survive”, to have seen out that phase. Part of the problem, he says, is that he made his entry “when Bollywood was still making those typical potboilers with foreign locations, arms wide open and songs, and all that jazz”, and the new wave of meaningful cinema was yet to hit the shores.

However, quality content mattered to him. Consider his pedigree. With Pankaj Kapur as father, kathak dancer Neelima Azeem as his mother, and maternal grandparents as journalists, young Shahid was exposed to the best of performing arts, world cinema and literature since childhood. “As he was growing up, there were conversations about why I do the kind of work that I do, and that intrigued him,” Pankaj Kapur recalls. “He’s a quick learner. He was intelligent enough to understand where world cinema is going, and where our Indian cinema is heading towards.”

The universe was perhaps reading his mind, and the actor’s career trajectory changed the day a lanky, curly-haired director walked into his house to narrate a script titled Geet.

Eventually renamed Jab We Met (2007), director Imtiaz Ali’s romcom was a runaway hit. And Kapoor’s measured portrayal of businessman Aditya Kashyap caught the eye of filmmaker Vishal Bhardwaj who called him to narrate the idea of his next caper thriller. The conversation laid the foundation for one of the most successful director-actor partnerships of the past decade, with the two collaborating for Kaminey (2009), Haider (2014) and Rangoon (2016). Though the third film had an indifferent showing at the box office, the first two are hailed as masterpieces. 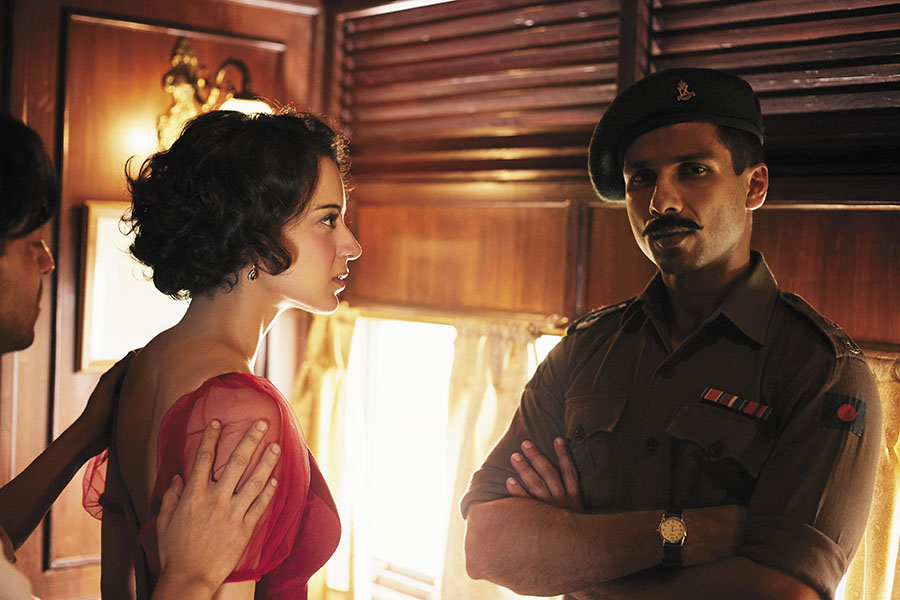 Shahid Kapoor with co-star Kangana Ranaut in Rangoon
Set against the backdrop of Mumbai’s underworld, Kaminey featured Kapoor playing twins, one with a lisp and the other with a stutter. Besides delivering his best commercial performance in a long time, the smart and edgy film gave the actor an opportunity to “rediscover” himself. “There are many ways of creating adaptations of the same persona, but it’s difficult to create a new persona altogether. And that’s the first time I did that,” he says. “And then I was addicted to it because, creatively, it was so satisfying.”

Their next collaboration, Haider, Bhardwaj’s adaptation of William Shakespeare’s Hamlet, is clearly the high point of Kapoor’s career. The actor’s nuanced performance in the titular role won him commercial and critical success across continents. Meanwhile, the film stirred up a hornet’s nest due to its depiction of the Indian Army and the minorities in Kashmir. But the actor believed in the project as much as his director did (both did the film for free), and Kapoor admits, “the most relevant film” of his career has given him a lot of strength, confidence and belief.

It also gave him the conviction to take up projects such as Udta Punjab (2016), where the teetotaller Kapoor played a delusional, drug-abusing rockstar. The Abhishek Chaubey-directed film ended up becoming the biggest opening of his career, collecting ₹33.8 crore over the first three days.

“I met the literati of the country when Haider was screened. Everybody wanted to see it, everybody had a point of view. So I learnt a lot from their perspectives. Udta was no different… it was another controversial film because we were talking about a problem that exists. I think it’s appreciated when you talk about things that are real issues through movies,” Kapoor says. “Of course, films should be about entertaining people and giving them a good experience, but that should not be the only thing they find in cinema.”

Kapoor had greenlit the script as soon as he heard it, Chaubey tells Forbes India. “I was quite surprised,” he adds. “I asked him what motivates him to do a film like this. And he said that ‘I do regular films—romantic and mainstream ones—but when am I going to get an opportunity like this?’ Given that he’s a star, and he also needs ₹100-crore films, I think it was pretty brave of him [to do Udta Punjab].”

And once committed, Kapoor was “immersed in the project”, adds the director. “We used to have extensive meetings regarding his character, and he also helped the producer and me in every way that he could. Also, he backed us right till the end [through the controversies]. For a director, that means a lot, to get support from the main stars of the film.”

Bhansali and Padmavati are now in similar need, given the delayed release compounded with death threats against the lead actor Deepika Padukone, effigies burnt and the general high-octane drama surrounding the film.

To this, Kapoor says, “It’s important for all of us to understand that there is a larger issue at hand, and that is the freedom of speech and expression; and how tolerant we are as a society… the film should be given an opportunity, and from the bottom of my heart I can say that [the film] will only make you feel proud about our culture and heritage.” The period-drama stars Padukone as the legendary queen Padmavati, alongside Kapoor as her husband Maharawal Ratan Singh, and Ranveer Singh as the antagonist, Alauddin Khilji.

This tumultuous journey may well end positively for all concerned, including Kapoor, who flowers with a good director and a great script. Without those, he flounders.

There’s a familiar pattern throughout Kapoor’s career: Either dizzying highs of iconic roles or the rough troughs of underwhelming commercial failures. For every Kaminey, he’s had a Dil Bole Hadippa! (2009) or Teri Meri Kahaani (2012); and a Haider has been followed by an occasional Shaandaar (2015) and Rangoon.

“ I took chances that some actors in my generation would not have taken. And they worked for me.

No wonder the actor has shown admirable calm amid every storm, patiently clinging on to the wreckage in pursuit of the next cult film.

“If you see, even in the regular commercial roles, as an actor, he has done well,” Pankaj Kapur points out. Shahid’s “intelligence”, he believes, lies in understanding that there’s no “mathematics” that can govern a film’s commercial fate. Rather, his endurance is a result of sticking to the basics: Choosing the correct script, working with the right directors and taking risks.

“I think that’s a great secret of his success and clearly, going ahead as well, it’ll hold him in great stead because that gives you longevity, beyond generations,” says Abundantia’s Malhotra, adding that Kapoor’s limited exposure works in the actor’s favour.

In sync with his preference for content-backed characters, Kapoor’s next two movies after Padmavati include Imtiaz Ali’s untitled project and Batti Gul Meter Chalu, directed by Shree Narayan Singh, who earlier made Toilet: Ek Prem Katha (2017). Kapoor is said to be playing a lawyer in the light-hearted social drama, based on the corruption around power distribution, resulting in mounting electricity bills for consumers.

“The biggest compliment is if people are talking about the characters that I have played. That for me is achieving something, way beyond anything else,” Kapoor says. “The definition of cinema is the ‘willing suspension of disbelief’, where you choose to suspend the knowledge of the fact that what you are watching is not true. So when you can achieve that, it is amazing.”

In fact, that pursuit of honest work is what has kept Kapoor going through the vicissitudes of his career. “I didn’t let go of the voice that is deep within, which is pure and honest. It comes from your soul, from your core, and every creative being will understand what I am talking about,” he says, gently nodding with conviction. “I had times when I was conflicted. But it [the voice] always came back to me and I always pondered, and I always waited. And maybe I took some chances that some actors in my generation would not have taken. I took those chances and they worked for me.”