A sarangi player who is audible in a fusion rock band, Suhail Yusuf Khan, 26, is worth making a noise about 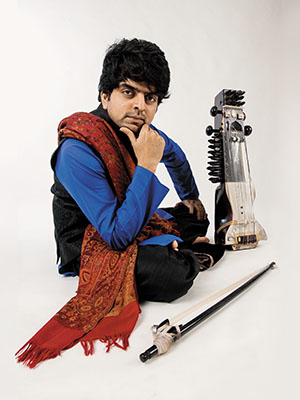 Image: Amit Verma
Suhail Yusuf Khan thinks this is the perfect time to be an indie musician in India

CATEGORY: ART & CULTURE
The notes of the sarangi is perhaps fusion rock band Advaita’s most prominent sound. And the man behind them is the 26-year-old Suhail Yusuf Khan, an eighth-generation sarangi player who joined the Delhi-based band in 2003. A decade, many hundred gigs and two hugely successful albums later, he’s not only an integral part of the band and its most recognisable face, but also a versatile musician in his own right, collaborating with the best talent and playing at festivals around the world.

A musicaholic who has “to jam even if there’s nothing to create”, Khan has had more than a dozen collaborations in the last one year with artistes such as Scottish singer James Yorkston, jazz double bassist Jon Thorne, violinist Patsy Reid and accordion player Hannah James. He has performed with ‘guitar god’ Steve Vai and the renowned music producer Talvin Singh. He was among the five Indian musicians performing this year at Scotland’s renowned folk music festival Celtic Connections.

“My sole aim in life was to be a performing artiste. I was attracted to recitals… to the sound of the instrument [sarangi] and decided that is what I wanted to do all my life,” Khan tells Forbes India.

Performance came naturally to the Delhi-bred Khan who belongs to an illustrious family of classical musicians of the Senia Moradabad gharana. The grandson of sarangi legend Ustad Sabri Khan and nephew of Kamal Sabri, Khan was exposed to music at six. His formal training began at eight and he soon started accompanying his grandfather and uncle on international tours. “I had my first concert in Liverpool at the age of 11,” he says. “I was part of a family tradition concert where three generations of sarangi players perform, signifying how they are carrying their music forward.”

But sarangi was always a challenge to pursue. “My grandfather was opposed to my idea of playing the sarangi,” Khan says. “He told me it’s a very demanding instrument, requires a lot of devotion and practice, and in an age when everyone’s in a hurry to be successful, what will you do playing it.”

Khan has not only excelled at the instrument but also broken many norms. For instance, an Indian classical instrument in a rock band was unheard of before Advaita emerged in 2004. The band blended electronic and hard rock sounds with full-blown Hindustani notes: Sarangi came to form the core of its compositions.

But it wasn’t entirely painless. “Some people were awestruck by the idea of a sarangi in a rock band. Some said I was ruining the instrument by playing in pubs,” says Khan, who confesses to lying at home “because playing in a bar was taboo for a classical musician.”

Besides the social stigma of having made the sarangi commonplace, Khan battled technical issues too. His instrument was barely audible in a hard rock arrangement. “The sound would get drowned by the keyboard and the guitar. It was a challenge to fit it in,” he says. “I had to use pick-up microphones and sound cards that created a digital sound. And then we tried to bring it as close to the natural sound as possible because a sarangi is not just about sounds, it has to create an ambience.”

Khan’s experimental music gets a vote of confidence from Rahul Ram, co-founder of Indian Ocean, the band that pioneered fusion rock in India. “Sarangi is a damn tough instrument to play. It is Suhail’s willingness to experiment that makes him stand out. I’ve seen him play with Parikrama and he did an awesome job,” says Ram.

“There are other musicians like Bombay Jayashri and Mandolin Srinivas who have experimented with classical music but Suhail belongs to a generation of young musicians who are not just listening to classical music but are also exposed to a variety of world music. And that makes a huge difference in attitude.”

Another weapon in Khan’s armoury is his soulful voice. Sarangi players compulsorily undergo vocal training as the instrument is believed to imitate the human voice. Thus it is rare to come across a sarangi player who can’t sing. Khan’s singing has a distinct Sufi style. “Sufi poetry has had great impact on my life and I try to convey that message when I sing,” he says.

His bandmate and keyboard player Anindo Bose says, “Suhail adds a lot of versatility to the band with his magical ability to come up with hooky lines. And his voice beautifully complements the other two vocalists’. Some of his songs [‘Durga’ and ‘Meinda Ishq’] are crowd favourites.”

At a time when India’s indie music scene is exploding, Khan has no dearth of options. Besides Advaita, he has an acoustic-electric project called Adi & Suhail with former bandmate and guitarist Aditya Balani (who had founded Incognito in 2002 that gave way to Advaita). He’s also worked with Artistes Unlimited and Projekt Square besides occasionally running the Suhail Yusuf Khan Collective (a TED-related project). Then there are appearances on TV shows like Coke Studio and The Dewarists. 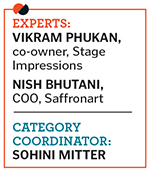 “It is the perfect time to be an indie musician,” says Khan. “In the next five years, it’ll become an industry like Bollywood. We have so many bands, so many festivals and so many things to do.” Is composing for Bollywood one of them? “I would love to only if I’m allowed to retain my own sounds,” he adds.

Tweets by @forbesindia
Risks of Doing Business in 2014
Aathira Krishna: Following Her Own Tune