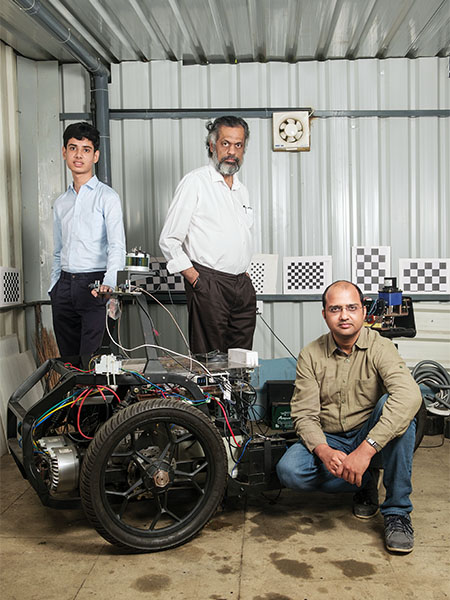 
V Vinay, Saurabh Chandra and Saad Nasser, co-founders of Bengaluru’s Ati Motors, had certain limitations to contend with when they decided to build an autonomous electric vehicle. They did not have the deep pockets of a Google or a Tesla, and a passenger vehicle would mean bending design to meet human needs as well as navigating a whole set of regulatory approvals.

A level-4 autonomous cargo vehicle (one that is fully autonomous within private spaces, according to classifications set by the Society of Automotive Engineers), which could carry up to 1 tonne of payload in a semi-private location like a factory or an airport, hit the sweet spot for many reasons. By eliminating human takeover completely, it gave them enough room to tinker with design and its expenses were perfect for the $1.1 million in seed money that their self-funded venture had to build a working research prototype. The team of 30 at Ati Motors is now building a functional prototype that is likely to be ready for commercialisation in two years. A proof-of-concept vehicle is being tested on the campus of the Indian Institute of Science (IISc), Bengaluru, where Ati has a research collaboration.

“I wanted to make one more technology play,” says Vinay, 54, a veteran innovator, who left his teaching job at IISc to first co-found Simputer, a hand-held tablet computer, and later Strand Genomics (now Strand Life Sciences). Chandra, 39, adds, “Philosophically, we wanted to do something ambitious and not just say, ‘Oh, this came out of India’. We wanted to make a global play. An autonomous cargo-carrying electric vehicle offered us the best of both worlds. Commercially, it is an attractive problem to solve, and we were going to make a full vehicle, and not just a software stack, or a set of programs.”

Building everything from scratch has its own challenges. For example, “we’re trying to build our own motor and… we have a size constraint, we have a small vehicle,” says Vinay. The car is designed to take two motors, each one independently powering one of the two front wheels, while a third wheel makes up the rear, which isn’t powered. The three-wheel design makes the vehicle “agile” and the two-front and one-rear wheel is also a clever engineering flip that makes the design amenable to that agility and flexible manoeuvring. The co-founders—the third one, Nasser, a 16-year-old Stanford certified whiz kid who dropped out of school to turn an entrepreneur—christened it Sherpa, inspired by the intelligent, load-carrying guides of the Himalayan mountaineering expeditions.

“ Efforts such as those of Ati Motors are significant for the ecosystem of startups and innovation in India.”
Amitabh Saran, co-founder, Altigreen

One important requirement was that the vehicle should finish at least one full shift of about eight hours on a charge. In that time, it should consistently deliver its payload from point A to point B as and when required. It means the entrepreneurs have to “own” the entire electric drive train, which entails designing their own motor, building their own battery management system, incorporating a liquid-cooled system for the battery pack—because it is superior to air-cooled ones—and so on.

Sherpa is also being designed to be relevant in global markets. In fact, Vinay and Chandra expect that selling Sherpa overseas will be vital to their entrepreneurial success. The idea is that the customer isn’t consuming Artificial Intelligence (AI), but the end product, Vinay and Chandra point out, whereas the software that goes into the autonomous vehicle will tap the power of AI algorithms. With each trip it would upload data to Ati’s servers, but the vehicle itself is designed to take all the decisions needed for the trip right onboard, without any remote handholding.

Says Amitabh Saran, co-founder of Altigreen, which makes retrofit electric hybrid kits, “Efforts such as those of Ati Motors are significant for the overall ecosystem of startups and innovation in India. In the case of Ati, the innovation will largely be in the AI/machine learning space.”

Saran, a former Nasa engineer, adds: “The important thing is industry participation early on to ensure widespread use.” Ati will need an anchor customer willing to use its products, an original equipment manufacturer willing to manufacture its product under licence, and, most important, the finances to do all of the above need to be tied-up. The co-founders are currently in talks to raise $10 million in series A funding.

The autonomous software-and-hardware stack doesn’t differ much from what others might be trying as well—it will still require sensors, cameras, detailed maps of the area where Sherpa will operate and so on. They will still need to localise the vehicle. Where AI will increasingly get used will be in perceiving what is around the vehicle, and the driving policy itself, which means what a vehicle should do in any given scenario.

“No algorithm is safe from the march of AI,” Chandra says. The tech space has changed radically and a huge AI-centric shift in autonomy has happened in the last four years, so while there is some catching up to do, it’s not like Ati has decades to catch up to. That is important because it is attempting to build a world-class product that will pilot in India, but sell overseas.

In the early days leading up to the formation of Ati Motors, Vinay, Saad—whom the professor has been mentoring from around 2012—and Chandra spent a few months trying to solve some interesting engineering problems, with no specific intent. However, they were each ready to start something new and serious.

While Vinay was looking for his next technology play, Chandra had sold his previous venture Neev Technologies—a software product development services provider—to Publicis for an undisclosed sum. He had first teamed up with Vinay due to a mutual interest in education and Vinay was already running a programme for young engineering students through another venture called Jed-i Technologies. That venture didn’t become big, but does high-quality work in training students to get hands-on with engineering. Vinay had also started another programme in math for even younger students, typically from classes 8 to 10.

Saad Nasser was only 11 when he met Vinay through various mutual connections and by then he had already taught himself a fair bit of computer architecture apart from interning for a year at Intel Corp. Thus started a beautiful mentoring relationship that was typically about meeting once a week at Vinay’s office and trying to advance the solution to one engineering problem or other. A now-well-known anecdote is how one day Saad coded the basic algorithm that Vinay was explaining, for the autonomous vehicle, in 30 minutes or so. “He is involved in everything that we do,” Chandra quipped, giving this reporter a tour of Ati’s labs, where staff were testing the battery assembly. A full-size chassis of Sherpa stood at one side on the same kind of wheels that go on a Maruti Suzuki Alto.

The entrepreneurs have also taken inspiration from robotics to simplify how Sherpa operates: The wheels, each of which has a motor connected to it, can be turned at different speeds simultaneously. That is how robots turn one way or the other, and the same mechanism is used for Sherpa to turn. This completely eliminates the need for a steering mechanism.

“We are on that treadmill of product development,” Chandra says. And he is hoping to do much more than just reinvent the wheel.