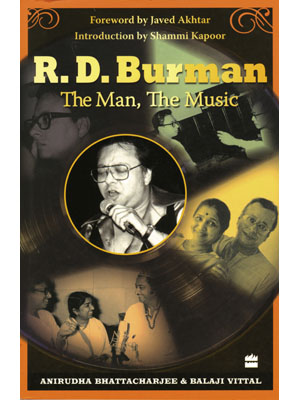 It’s not easy being an R.D. Burman fan in the 21st century. At one end of the spectrum, we have anorexic airheads swaying to purported “remixes” of his iconic numbers. On the other, sites on the Net where hard-core R.D. obsessives have frothing-at-the-mouth exchanges over the most arcane trivia, with the enthusiasts and trivia buffs in between.

The average R.D.B. fan has to wade through far too many articles, blog-posts, pamphlets and videos that leave a greasy aftertaste. Sadly, these are either collections of random data or hagiographic froth lacking structure, focus and perspective.

It’s a relief, then, to come across the balanced, no-nonsense R.D. Burman: The Man, the Music. This is a real book, not an extended monograph. The authors’ enthusiasm and industry is evident from the wealth of information. The interest does not flag — R.D.B.’s life and music are laid out within the context of Hindi films and film music, along with the million fascinating stories that live in Bollywood. The strange lives and doings of the film world haven’t featured in well-written non-fiction. Suketu Mehta in Maximum City and Anupama Chopra’s book on the making of Sholay were quite delicious, but factual  accounts of Bollywood have on the whole been turgid uninspiring mélanges. This is an honourable exception. The book has structure, flow, decent writing (though the style is a trifle orotund) and an index.

Along the way, practically every piece of music R.D.B. ever composed is analysed, much in the manner of a vintage car being taken apart and put together again. Not just the film and the lyricist, but the circumstances, the musical inspiration, the raga it’s based on, the instruments used, the session musicians, the classification by genre…this is pretty heavy musical analysis. Fortunately for the laymen, it’s also studded as full of anecdotes as a Christmas cake with plums.

I have just two grouses. This is serious research and should have had footnotes. When I read that the first choice for Amitabh Bachchan’s role in Bombay to Goa was Rajiv Gandhi (!!), I want to know the source of the information. The other issue is personal — I feel there should have been a separate chapter on R.D.B.’s collaboration with Gulzar and perhaps another on his Bangla songs.

On the whole, however, practically every issue that comes to mind has been dealt with, whether his partnership with his father or Asha Bhonsle’s role in his last days.

I like the book immensely. Nay, I love it. This is treasure trove for the intense R.D. acolyte, mother lode for the average enthusiast.