Bharat Vikas Group is India’s largest housekeeping firm. And its first big step was in the country’s most powerful House: The Parliament 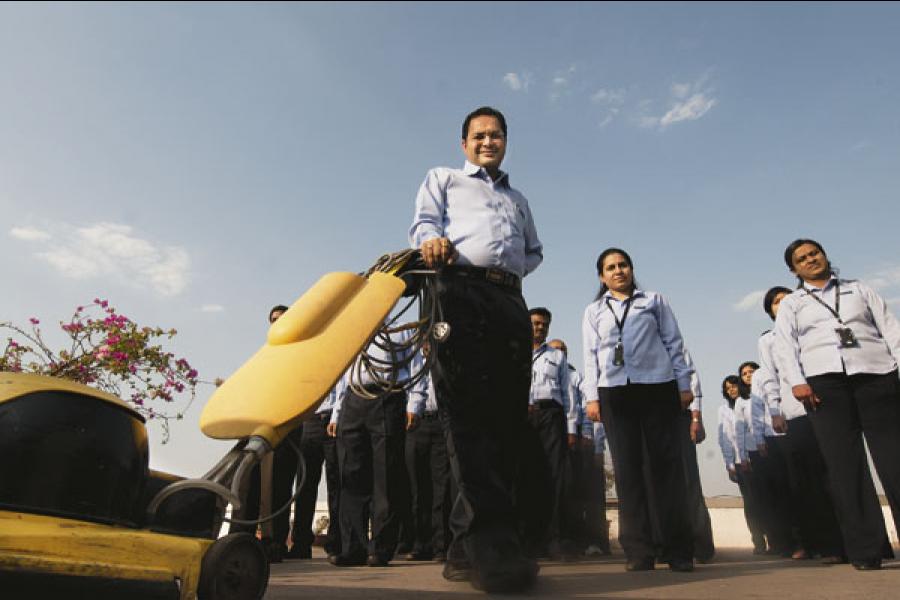 In 2003, there was an unforeseen change at Parliament House: Members of Parliament noticed that the insides of the building, cleaned by the Central Public Works Department (CPWD), looked like they could do with some more scrubbing, while the areas around the library and the annex had taken on a brand new squeaky clean finish.

The CPWD, which had been cleaning government buildings in Lutyens Delhi since Independence, had outsourced part of their job to a little known company from Pune, Bharat Vikas India. Armed with high-pressure water jets and industrial vacuum cleaners, instead of the usual brooms and mops, Bharat Vikas managed to make such an impression on the MPs that they asked the firm to bid for contracts for the main Parliament building, Rashtrapati Bhavan and the Prime Minister’s residence.

It has been eight years, and two governments, since then. But no matter who has held the purse strings, Bharat Vikas has bagged the contract each time. “Given that the Parliament is a very sensitive location to operate in, I would say their performance has been good,” says Neeraj Dasandani, executive engineer, CPWD.

But, in 2003, winning the bid to clean the Parliament House brought its own problem. It was a small company, with revenue of less than Rs. 10 crore, and bidding for the six-month contract would need an upfront investment of Rs. 50 lakh in equipment.

While some within the company balked at the cost, BVG founder Hanmant Gaikwad was convinced. “If we did good work, I saw no reason why the contract would not be renewed,” he says. This decision saw the company increase its revenue from Rs. 16 crore in 2005 to more than Rs. 400 crore in 2010. He has also attracted private equity investments from Kotak Private Equity and 3i Capital.

Equity infusion is what will propel the company into a full-service facilities management company, believes Gaikwad, and is the only way he can maintain high profitability in an industry known for sub-scale players and low profitability. “I won’t be surprised if we clock Rs. 2,500 crore in the next five years,” he says.

With 25,000 employees, BVG is not a large company. But India’s facilities management services (FMS) industry — estimated to be worth $2.85 billion by 2012, according to a Grant and Thornton report — is highly fragmented. It has just about 15 organised players (who have less than 10 percent of the market share) and 500 small operators, among whom many have struggled to grow.

Difficult Beginnings
The 38-year-old Gaikwad’s success has more to it than a good business decision. His childhood in Pune had been a tough one: A chronically ill father had depleted the family savings and, on his father’s death, he was left scrounging for his fees in the third year of college. Unable to afford the Re. 1 bus fare to college on most days, he cycled 21 km each way.

Former colleagues remember Gaikwad as a man in a hurry. But until 1997, he — an engineer at the Pune Tata Motors plant for three years by then — had no idea he would get into the business of cleaning.

In 1997, a couple of events changed the course of his career.

Gaikwad and a colleague, Ganesh Limaye, saved the Tata Motors management Rs. 2 crore by suggesting ways to use old electric cables worth Rs. 2-3 crore that were simply going to waste at the plant. “At that time, no one would bother with old cables,” says Limaye, now in charge of BVG’s purchases. Gaikwad and Limaye studied the cables and realised they could be used for new car models after some modifications. This won Gaikwad instant recognition from his employers and this would help him in future deals and projects.

The second incident was when some people from Gaikwad’s native village in Satara, Maharashtra, approached him for jobs at Tata Motors. The plant management agreed to hire eight of them, but could not employ them on the company rolls. Gaikwad suggested that he could employ the people in a trust he had registered and Tata Motors could pay the trust. Given their confidence in him, Tata Motors not only accepted his suggestion but also helped him get Rs. 60 lakh in loan from Tata Finance to buy cleaning equipment.

Starting Out
By the time Gaikwad quit his Tata Motors job in 1999, he began formulating a vision for BVG: They would not refuse any job that guaranteed a reasonable rate of return; good and reliable labour would distinguish him from competitors; he would innovate and offer a larger array of
services to stay ahead of the pack.

The FMS business is one in which companies claim they’re locked in a race to the bottom. “With little to differentiate between firms, the one that quotes the lowest price bags the contract,” says Gorakh Nakwa, director, Dirt Busters India.

BVG got its first big break in 2001, when GE Power outsourced its cleaning. Gaikwad and eight workers drove overnight to Bangalore, arrived on a Saturday morning, and cleaned up the factory by Monday. Eight other contracts came in from Bangalore over the next few months, as did enquiries from Chennai and Hyderabad.

It was his work at the Mumbai Fiat plant in 2005, however, which showed that cleaning was not his only forte.

The Fiat plant was located in the flood-prone Mumbai suburb of Kurla and the company wanted to shift it to Ranjangaon near Pune. This was a new job for BVG. Gaikwad remembered that in 1998, Tata Motors had imported an old Nissan plant from Australia for manufacturing the Indica. He tracked down former Tata Motors employees, many of whom had retired, and put them to the task of dismantling the Fiat plant. Fixtures were neatly labelled and trucked to Ranjangaon, where they were reassembled.

Over the years, Gaikwad has realised it is fatal to compete on cost alone. While its competitors are locked in the cost-plus-10 percent margin game, BVG bids for projects on the basis of area.

“We believe the customer should only be concerned with the end result and not the cost per person,” says Umesh Mane, vice chairman, BVG.
Investing in technology and getting the best cleaning equipment helps reduce costs by 10 to 20 percent and provides a consistent standard of work. BVG was one of the first companies in India to invest in street sweeping trucks when it got a contract from the Pune Municipal Corporation.

The Next Stroke
For now, Gaikwad’s main challenge is to manage growth. With the FMS business running on auto pilot, he feels the need to create systems and processes.

Human resources is another concern. As the organisation is expected to grow from 25,000 to 100,000 by 2015, finding the right labour force will prove to be a challenge. For now, BVG says it hasn’t faced any problems as the supply from Satara shows no signs of slowing down (it forms 30 percent of the work force), but there is a possibility that the National Rural Employment Guarantee programme may prompt fewer people from rural areas to migrate to urban centres for employment. This year, BVG tied up with the Ministry of Human Resources and Development under the Swarna Jayanti Gram Swarozgar Yojana, to provide vocational training to rural youngsters from below the poverty line families and employ them. The government pays BVG Rs.12,000 for each person it trains.

Sainath Ramanathan, associate director (growth capital) of 3i Capital, which invested an undisclosed amount in BVG in January, says the company is working with BVG to help it realise the importance of getting clients to pay up for services used.

Gaikwad believes that BVG should not reject any job simply because it is something they have not done before. Last year, a small Maharashtra State Electricity Board contract came up, looking for a sub-contractor to lay cables in Satara. Realising that being the main contractor would be far more profitable, Gaikwad decided to take on the entire project, which included installing transformers, cables and sub-stations. He made a profit of 25 percent on the job. This year, the business of laying cables is expected to contribute 30 percent of BVG’s revenues.

Gaikwad has also brought in UK consultant Tim Hancock to learn what other markets are doing. Hancock talks about the endless possibilities for facility management in India and is working on teaching BVG how to bid for complex contracts.

To increase revenue, Gaikwad is aiming to get existing clients to increase the size of their contracts. So, if a customer has got BVG to clean its offices, why not let it handle their plumbing as well? Maintaining air-conditioning systems is another lucrative segment that the company is gunning for. Gaikwad is also planning to take his flagship services, such as factory maintenance, into other sectors such as pharmaceutical companies
and hospitals.