A review of the autobiography of KM Mathew, the doyen of Malayalam journalism 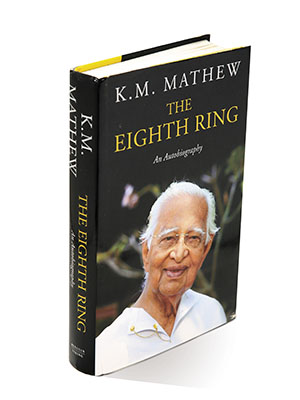 Autobiographies have the inherent trait of chronicling the story  of a society through the personal life of its author. And so is the case with KM Mathew’s The Eighth Ring. The memoir that recounts more than 100 years of the history of the Kandathil family, which established Kerala’s leading daily Malayala Manorama, is inevitably handcuffed to history.

Mathew (known as Mathukuttychayan in his private circles) was the daily’s chief editor from 1973 until his death in 2010 and was the grandnephew of the paper’s founder Kandathil Varughese Mappillai. The Malayalam original of the autobiography, Ettamathe Mothiram, was published in 2008 and has now been made available in English, though the translator has chosen anonymity.

In the preface to the book, Mathew speaks of the “guiding light” on his finger. After the death of his mother, his father KC Mammen Mappillai had his wife’s ornaments melted and made into nine rings, one for each of his nine children. Being the eighth child, Mathew received the eighth ring and hence the title of the book.

In the opening chapters, Mathew, a nonagenarian while writing his life story, travels down memory lane to his childhood in Kuppappuram and creates a vivid imagery of life by the backwaters of Alappuzha. The reader gets a sense of Kerala society at that time when Mathew describes his first encounter with its rigid caste hierarchies. In the second chapter titled ‘Untouchable’, Mathew recounts how, as a child, he had touched a sari that was washed and spread on the ground to dry at a Brahmin household. A member of the house had the sari disposed because he had touched it. “I learnt for the first time that clothes could be polluted by touch,” writes Mathew. References have also been made later to Malayala Manorama’s support for the Vaikom satyagraha of 1924, a movement to allow ‘backward castes’ to walk freely on the roads around the Vaikom temple.

Mathew’s father, who had established many successful enterprises, including the highly profitable Travancore National Bank, the New Guardian of India Insurance Company and numerous plantation companies, also wrote editorials on political affairs for Malayala Manorama and was asked by family elders to assume editorship of the paper after the demise of Kandathil Varughese Mappillai, his uncle and the founder of the paper, in 1904.

Mammen Mappillai’s support to the Joint Political Committee—that fought for a fair representation of all communities in the legislative assembly of the princely state of Travancore in the 1930s—invited the ire of CP Ramaswami Aiyar, the dewan of Travancore who ruled on behalf of the maharaja. Ramaswami Aiyar plotted a run on the Travancore National Bank headed by Mammen Mappillai and had him arrested. Offices of Malayala Manorama were also sealed, forcing it to stop publication. (It was only after India’s independence, when princely states were annexed to the Union, that it could restart.) The shifting of the paper’s archives, by an employee, to a safer place before the office was sealed, is among the numerous anecdotes that enrich The Eighth Ring.

The book is worth reading for anyone interested in the history of pre-Independence Kerala traced through the journey of a 127-year-old newspaper.

Tweets by @forbesindia
A jukebox for the wrist
Education key to harnessing India's potential: Ratan Tata