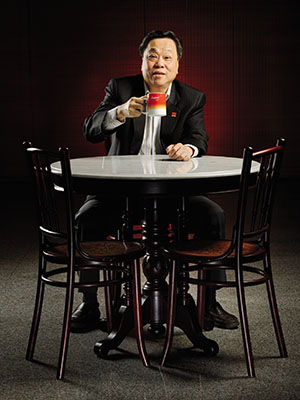 Image: Munshi Ahmed for Forbes
“Asia is what Super is all about,” says coffee pioneer David Teo

David Teo became an accidental coffee pioneer in Singapore in the late 1980s. His wife Te Lay Hoon’s clothing store had failed, and she was at loose ends. Teo had a business of his own supplying plates for printing presses but got the idea that busy Singaporeans might want an easier and faster way to get their caffeine kick. Soon Te and two of her siblings were set up in a 2,000-square-foot instant coffee packaging operation.

Instant coffee was then mostly sold in jars, and consumers needed their own creamer and sugar. Teo’s inspiration was to package the three ingredients into 20-gram sachets and brand it 3in1 Coffee. That wasn’t enough, however. Sales were slow, and he was prepared to write off the $55,000 venture.

Instead, he tinkered with the coffee’s ingredient mix to better appeal to the Singaporean palate. “I tested it, gave it to my wife, my friends, everyone,” he says. He also spent heavily on a big marketing push. In the second year, sales in Singapore reached nearly $3 million, and the bigger picture came into focus: Asia’s coffee market was experiencing double-digit growth, and his coffee-mix formula could be adapted to fit different tastes. While Singaporeans prefer a thick, aromatic coffee, the mix could be made sweeter for Thais, for example, or milkier for Chinese. Convinced it would work, Teo began to export. “After the sachets became a hit in Singapore, my dad immediately moved into Malaysia, Thailand and Myanmar,” says Teo’s son, Darren, the corporate strategy manager for the family company, Super Group. “That’s why in all of these markets, we have the first-mover advantage.”

Today, Super is the second-biggest seller of instant coffee in Singapore and the number one seller in Myanmar, which is the company’s second-largest market (see box). It also ranks near the top in several other Southeast Asian markets, though Swiss food-and-beverage giant Nestlé—which began selling Nescafé 3in1 sachets in the 1990s—is the region’s leading brand by far.

Convenient coffee won’t sell itself. Teo spends a high 10 percent of revenue on advertising and promotion. One payoff: Super moved up to No. 40 on the 2013 ranking of Singapore’s most-recognised brands worldwide, according to Brand Finance, a UK consultancy.

It’s a long circle from the family coconut-candy factory, where as a youth David Teo, oldest of nine, worked in Johor Bahru, just to Singapore’s north. He was 18 when his father died, leaving him in charge of a business that wasn’t making any money.

He closed the factory and opened a noodle restaurant before a friend of dad’s helped him set up a business printing price-tag stickers. He kept evolving, and in 1981 a chance connection got him a shot with Fuji of Japan, and the result, Fuji Offset Printing Plates Manufacturing, became a leading regional supplier. Teo remains its executive chairman, and his one-quarter ownership is worth $2.1 million.

Coffee, meantime, begat a portfolio of more than 300 instant beverage and food products. Super’s fastest-growing segment is now the food ingredients unit, which sells in bulk to food and beverage producers and last year, just five years since it started, racked up nearly a third of Super’s $425 million sales.

Revenue has almost doubled since 2008 and should reach $478 million this year, according to an average of estimates collected by Bloomberg Finance. Net income soared 32 percent last year, to $65 million. The company has earned “ten-bagger” status, with the value of its stock increasing a good tenfold over the past four years. Super now owns and operates 15 plants throughout Asia, employs 2,800 workers worldwide and does business in 52 countries.

Super’s move into the food supply business had its roots in a lesson in controlling costs that Teo learned when a supplier for Super’s 3in1 cereal pushed up its price. In 1993, he invested in a production line for cereal flakes and before long was building his own plants to produce coffee-mix ingredients—including soluble coffee powder and nondairy creamer—so he could manage quality and supply.

Those plants initially were only for Super’s own products. After Darren joined Super in 2007 as an economics grad of the National University of Singapore, he won his father over with an idea: Why not supply other companies? The launch came shortly before the 2008 milk scandal in China—at least six babies died after drinking infant formula tainted with an industrial compound—and big food-and-beverage companies started to shy away from China-made ingredients.

“A lot of big brands saw what happened to [Chinese dairy products company] Sanlu, which collapsed overnight,” says Darren, 30. “They didn’t mind paying a slight premium for reliability and safety.”

Demand for its ingredients, including a bottled nondairy creamer that David developed and marketed to milk-tea makers in Taiwan and China, quickly outstripped supply, and it took time for Super to ramp up capacity. 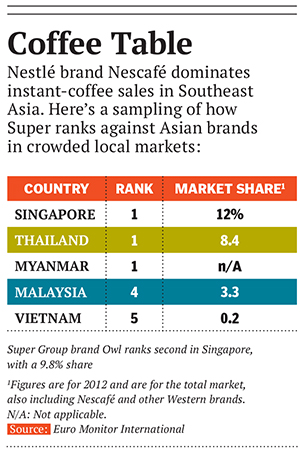 With more production lines up and running—which will soon include a “botanical herbal extract” plant in Malaysia for high-value ingredients such as chicory and ginseng powder—Super hopes to push more heavily into Asia, North America and Europe. “This is a business that has no boundary,” says the son.

Super itself sticks to self-sufficiency. “We don’t engage consultants,” says the 62-year-old father. “It’s all in-house technology, from manufacturing to branding, from hardware to software. We know how to build sophisticated systems very efficiently and economically”, which translates to being able to build a coffee plant for much less than other companies spend, adds Darren.

It remains a family-run business, with David, his wife and her brother owning a third of the company. (Teo’s and Te’s shares are valued at $495 million. Singapore billionaire Sam Goi owns 11.5 percent.) Another of the couple’s three children, Elaine, 34, heads marketing and product development. Chairman David has told his kids not to take their place in the company for granted. But both say this hasn’t created friction, just the occasional reminder from their mother at the dinner table to put business aside. “It sounds too perfect, but the truth is we rarely quarrel,” says Elaine. “Besides, too many internal struggles will demoralise the team.”

It’s a lesson learned from observation. Super bought the iconic Singapore instant-coffee brand Owl for roughly $15 million in 2003 after family squabbling left the company foundering. “When we bought Owl it was with the intent to kill the brand,” says David. “But we went in, and the first thing I see is that their management is good. So, after six months, we turned it around.”

Within two-and-a-half years, Super recovered all of its investment, he says, and has even opened an Owl Cafe in town to stoke interest further.

Super boasts a strong cash position, and David says it’s constantly on the lookout to buy small players across Asia. To gain market share in the Philippines and Indonesia—especially tough to crack given domestic turf protectors—Super formed joint ventures with San Miguel and Petra Foods.

Of course, the next big market to chase is China, and Super has been ramping up its investment there, building four plants. The company has been in China since the 1990s, selling mostly the 3in1 cereal. But the taste for instant coffee has picked up over the past five years—sales are up 57 percent, according to Euromonitor International—so Super is reinforcing its offerings, largely with a major rebrand.

Meanwhile, the supply operation needs to add premium ingredients or else risk competing with new entrants on price, says Lee Mou Hua, an equity analyst at CIMB Securities in Singapore. But given the company’s strong distribution network in difficult-to-penetrate markets, he adds that “Super is on track to double revenue by 2017”.

Teo declines to comment on Super’s strategy versus Nestlé’s and plays down competition generally: “We’ve expanded our manufacturing, distribution and brand presence across the region, putting us in the right position to tap Asia’s consumption growth because ultimately Asia is what Super is all about.”


Mixing It Up in Myanmar 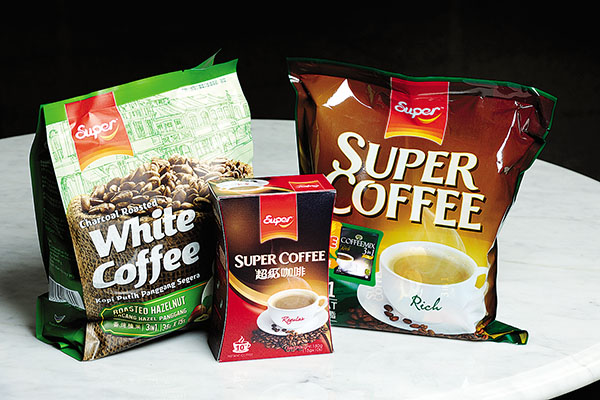 Super Group’s David Teo laughs as he recounts how a near-miss in 1993 proved to be a pivotal moment for the company. “My distributor in Myanmar used to be a secondhand car-parts dealer. He was in Singapore on business and bought our coffee on a whim,” says Teo. The entrepreneurial fellow visited Super’s headquarters to buy 50 cartons of the coffee mix to sell back home but was brushed off by the sales manager, who told him to go to a supermarket. Realising what had happened, Teo went running after him. “I said, ‘No, no, no! Come back, come back!’ ”

Today, Super sells more than a million cartons of coffee mix a year in a country that is new to many businesses but accounts for 20 percent of the company’s branded sales. That takes flexibility. In Singapore, coffee-mix sachets are packaged 15 to 40 to a bag that retails for between $2.30 and $4, depending on the brand. In Myanmar, where the daily wage is about $2 and coffee is a luxury, most can afford to buy only a sachet or two at a time. So Super sells its coffee in perforated strips, where a sachet can be torn off and sold separately for around 10 cents, which also allows for direct sales off the back of pushcarts. Super uses this strategy in Thailand and the Philippines, too.

Super doesn’t scrimp on promotion, however piecemeal the retail. In Myanmar, it recently sponsored the country’s biggest film awards ceremony to appeal to younger customers.

Tweets by @forbes_india
For the Road, and Home
Korean Pop: SM Entertainment's Production-Line Approach to Success