Home a loan: Taking stock of 'Housing for All' 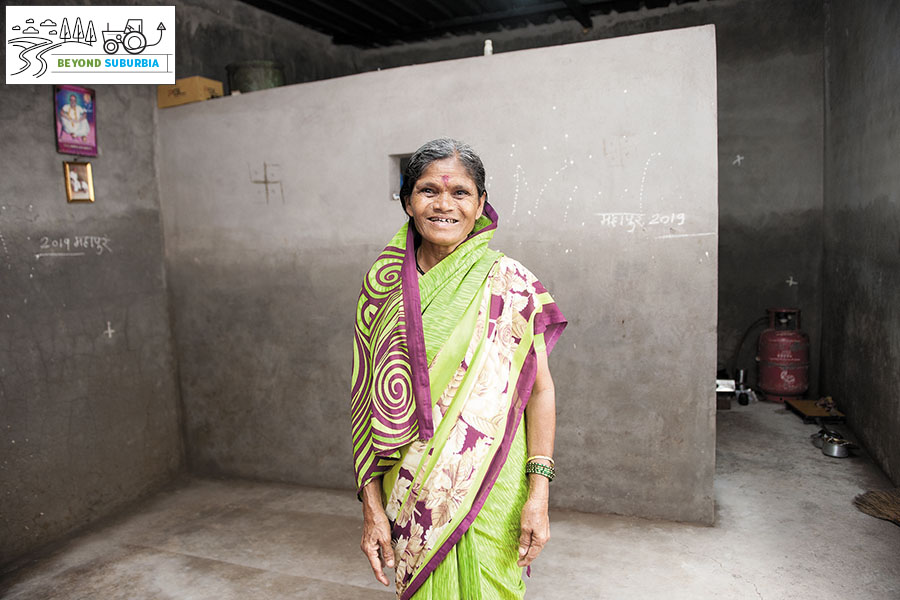 Vatsala Shankar Shevale removes a key on a thread hanging around her neck and unlocks the door to her house with a tinge of pride. The brick walls are plastered but unpainted. Inside, the house is spare, a naked bulb hanging from the ceiling and a ‘kitchen’ in one corner equipped with a gas cylinder that she procured under the Pradhan Mantri Ujjwala Yojana. Outside, the dilapidated remains of her previous house are evident—debris and a brick chulha.

Shevale, a resident of Nagthane village in Maharashtra’s Sangli district, is a beneficiary of the Pradhan Mantri Awaas Yojana-Gramin (PMAY-G), which came into effect on April 1, 2016, after the restructuring of the earlier Indira Awaas Yojana. The scheme provides a unit assistance of ₹1.2 lakh for a 269 to 300 sq ft house to beneficiaries identified under the housing deprivation data of the Socio Economic and Caste Census (SECC), 2011—the weakest and poorest sections of society, landless and those living in kaccha houses. The government envisaged a target of 1 crore houses in the first three years with another 1.95 crore houses to be built by 2022. Convergence with schemes for electricity, gas and a toilet as well as payment for 90/95 days labour under MGNREGA are part of the scheme.

With its set deadlines and targets, geotagging of houses and credit of money directly into accounts, the scheme seems to be making sustained progress in villages. Out of the target of 4.5 lakh houses for Maharashtra till 2018-19, about 3.5 lakh homes have been completed, according to official data. But even as the government continues to drive momentum, focussed on its target of achieving ‘housing for all’ by 2022, the scheme’s beneficiaries struggle to tackle cost overruns with little awareness of financial and technical assistance they can avail of.

While Shevale’s son pledged his labour for a year to a farmer for an advance of ₹70,000 to complete his house, in neighbouring Walwa village, brothers Ramchandra and Shyamrao Londhe have raised money from family and friends. Their houses, built alongside, are almost complete.

The government releases the money to families in four installments in a year; the first immediately after sanction to get the work going, the second after the foundation has been laid or the plinth level has been achieved, the third is mapped to either the windowsill/lintel or roofcast level and the final after the house is completed and a toilet is in place. The brothers have received ₹85,000 each so far, but have spent ₹5.5 lakh on their houses, which are bigger than the government-specified size at about 450 sq ft each. “We put in a proper foundation and columns; the foundation itself cost ₹1 lakh,” says Ramchandra, an electrician. 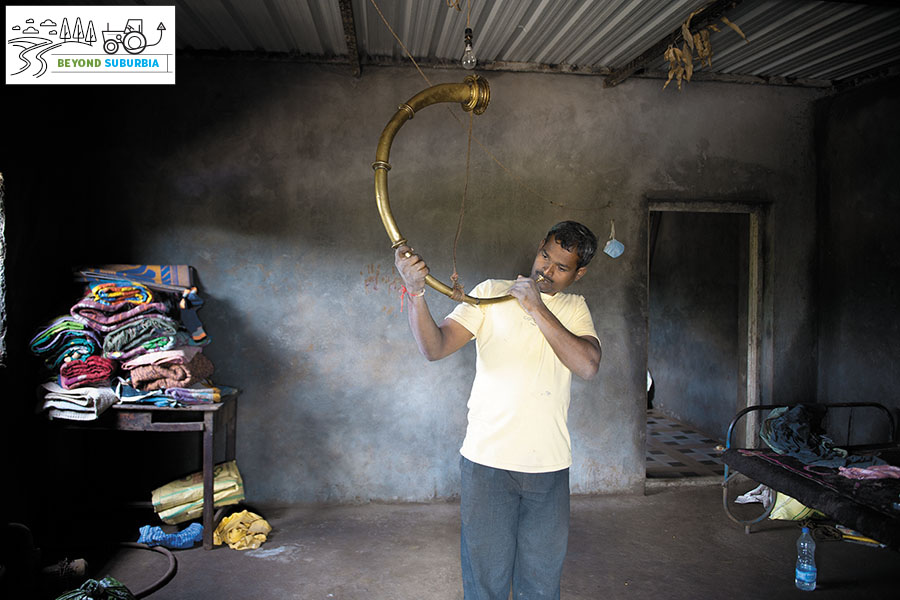 Hanumant Prakashe’s son Manohar inside the home that was built under the scheme. The Prakashes have built two rooms and a mezzanine level over the kitchen to store grain
Image: Mexy Xavier

A few houses away, Hanumant Prakashe has built two rooms and a mezzanine level over the kitchen to store grain, though that wasn’t enough to protect it from the floods that submerged the area recently. The walls are still wet, and a couple of cracks have developed on the outside of the house. The family moved into the house this June but had to vacate in August, says Prakashe’s son Manohar pointing to a line that marks the level of water that remained in the house for several days before it receded. Manohar, who works in the fields as a labourer, spent three to four months at home working on the house which cost an additional ₹2.5 lakh to build. He has received the ₹1.2 lakh assistance, but is waiting for ₹17,000 due to him on account of MGNREGA.

Since the construction is beneficiary-led, there are several things to keep in mind, says Rajan Samuel, managing director of Habitat for Humanity, which has helped in the construction of 20,000 houses in Maharashtra, both under the PMAY-G scheme and otherwise.

“People set aside money and materials, and there is sweat equity involved. The biggest challenge is over- or under-engineering because the local mason drives everything,” he says, adding that there is a need for housing support services so that the end user is able to effectively avail the subsidy, put the money to good use and complete the construction. “If there is a time overrun, or cost overrun, then the project goes for a toss. That is why some houses don’t get completed,” he says.

Since various factors are involved, including migration for work, beneficiaries working in the fields and arranging the extra money that is needed, it is important to assess and align the construction with the cash flow of the end user.

“The names of beneficiaries selected cannot be pushed down on the list or deleted. Sometimes, when people don’t have enough money and need time to organise it, they request a delay of say, two months, and this is given. Even when people are not able to finish their houses on time, they can seek an extension,” says Sanghratna Sonawane, state coordinator for PMAY-G. 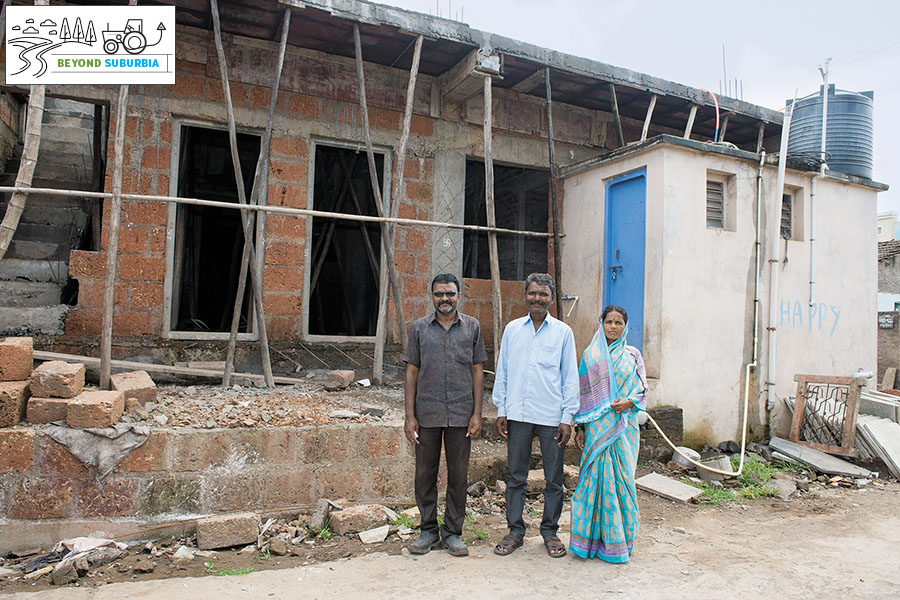 Brothers Ramchandra and Shyamrao Londhe are completing a house bigger than the government-specified size by raising money from family and friends
Image: Mexy Xavier

Although the scheme envisages the facilitation of a bank loan of ₹70,000 in addition to the basic assistance, it is yet to take off on the ground. It is something the government is working on. “We are speaking to banks,” says Dhananjay Mali, director, State Management Unit for Rural Housing.

“Even if they are given ₹70,000 at market rate, it will benefit them because we don’t know how much the private money lender is taking. We are working on that and how we can link it to a self-help group. The loan will be given with certification of the self-help group so that somehow it should be secured.”

Three years down the line, it is time to take stock, assess and plug the gaps. “There is a lot that has been done and remains to be done. Whatever you do, there is always scope for improving,” he says. While the initial focus was to achieve quantitative targets and completion, it is now also on quality, training and grievance redressal.

Engineers are appointed to assess and monitor constructions but Mali says there will now be an assessment. Ten percent of the 3.5 lakh houses constructed so far will be inspected through a layering process to check their quality. “The initial layering will be at the block level. We have around 351 blocks. So the BDOs (block development officers) will be, personally or through their officers, visiting the houses and there will be a link in the software which will ask them to take a photograph and comment on whether the house is plastered, what kind of roof has been constructed, how much money has been spent as well as how much money the beneficiary has spent from his own pocket, how much loan he has taken from a private money lender.”

Another ten percent of these, he says, will be cross-verified at the district level, “out of which around 350 will be verified at my level. So that lower levels will be aware that you are doing quality checks. Otherwise it turns out to be just a mechanical exercise”.

The government is also working on updating the beneficiary list to include those who might have been left out of the list created from the 2011 census, as well as households that came up after 2011. “To give them a chance we conducted a survey called Awaas Plus. With SECC, we took parameters related to housing. This survey has been conducted only on parameters required from the housing angle—the kind of house they are living in, socio-economic status, the land and source of income.”

Additions are also being made to the design and typology guidelines—region-specific technologies developed based on local materials and traditional construction practices, making them less costly and more environment-friendly than brick, cement and steel intensive systems. While designs along with cost estimates have been made for the Konkan and Marathwada regions in Maharashtra, Mali says they are now working on other regions as well. The specific designs can help people align their needs and expenditure right from the beginning, says Mali.

The scheme, he says, is an assistance and also acts as a trigger and motivation. “Every person dreams of having his own house. And when he realises he is getting ₹1.5 lakh, he goes ahead, a decision he might otherwise not have taken. But once he starts building it, he ends up spending more. Because then it also becomes an emotional attachment… that I will build a good house.”

It seems to be the case for Deepak Bansode from Nagthane village, a beneficiary under the Maharashtra government’s Ramai Awas Yojana (for which funds are released by the state but implementation is along the lines of the PMAY-G). Bansode says he mortgaged 10 gunthas of his land for a loan of ₹2 lakh towards the additional expenses for constructing the house as well as some household expenses. He may or may not get his land back. But, as he puts it, “Then what to do? How long can you sleep in the rain?”

Tweets by @forbesindia
Podcast: In conversation with Virat Kohli, the sharp businessman
Why this former JP Morgan exec is chasing old money