What do the Gujarat results mean for Modi? 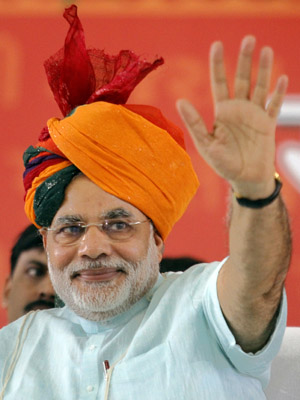 Image: Amit Dave / Reuters
Now that Narendra Modi has won Gujarat convincingly, his anointment will be that much faster

Explaining Modi’s win today is simple: This is a government that has been judged by its performance.

All the pre-election rhetoric on either side matters little. What the electorate votes for is the quality of his governance. Modi’s critics were unable to come up with a credible answer on how they would be better. The Congress also made a tactical error in the belief that they could override a regional sentiment by positing a caste sentiment over it. That clearly did not work and Keshubhai Patel’s Gujarat People’s Party ended up hurting the Congress more than it hurt the BJP.

So what do these results mean for Modi and for the BJP?

Let’s take the BJP first. At this point I see two interconnected things. First, and this is the most obvious one, is the question of leadership that can replace the Vajpayee-Advani team which ruled the roost for 20-25 years. Second, what is the larger political positioning you got to take in order to emerge as a possible alternative at the centre?

I think both questions are related and at times a little distinct.

The important thing about a political leader is that he must enjoy a support which is far beyond that of the faithful. His or her ability to draw an incremental vote must be discernible, which is what made Advani and Vajpayee different from each other.

While Advani enjoyed the fierce loyalty of those committed to the BJP, Vajpayee’s additional strength lay in his significant appeal amongst those who were not automatic BJP voters but were inclined to give the party a chance based on the leader.

In the aftermath of the defeat in 2004, I think this debate will continue indefinitely. To my mind, one of the most mistaken conclusions drawn from this defeat was, BJP was insufficiently attractive to its core voter. That may have been a legitimate conclusion in 1984 but it was certainly not the cause of the electoral defeat in 2004.

In 2004, the focus was on how to endear the party to the faithful. It got further complicated with Advani’s Pakistan journey. His comments about Jinnah were seen as heretical.

Out came two strands of opinion:
On one hand there was a section that was trying to reinvent the BJP and on the other, some were trying to get back to basics. Between these two ends, the results were inconclusive and a sort of a stalemate emerged because keeping the NDA constituents happy was also very important. What emerged within the BJP was a trend of trying to develop a full-fledged corporate identity rather than make the party co-terminus with the leader. Unfortunately for them, that didn’t yield spectacularly good results because wherever the BJP has succeeded, it has done so on the back of a charismatic personality; this is true of the states where the BJP has registered its highest successes.

Where it has failed, as it did in 2009, was because the projected face didn’t appeal.

There’s a thought flow within the RSS that it is the institution that matters and not the individual. These are all very lofty principles but in political terms, while our elections are parliamentary they are also presidential at the same time. 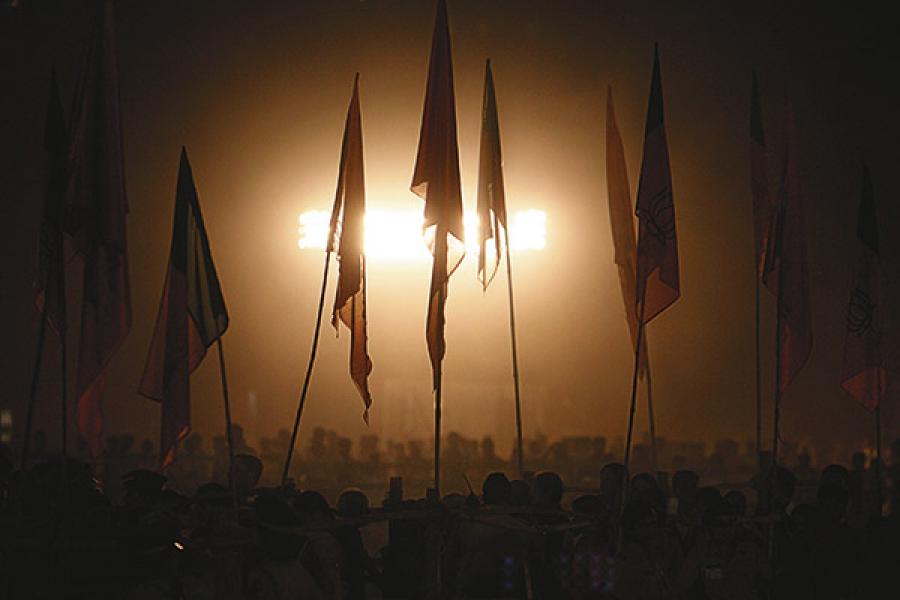 From within the BJP, there's been a demand for some time that the party needs a face that can galvanise both the faithful and recover the old middle class constituency

Over the past two years, the name of Narendra Modi has been doing the rounds. This has been resisted and a part of the resistance comes from the present top rung of leaders. The resistance has been less from the ground forces of the BJP and more from a section which has been widely exaggerated by the media. It is they who feel the entry of Modi will mean that they have hit the glass ceiling.

At present we are in the process of seeing the de facto anointment of Narendra Modi as the BJP leader. Whether this becomes a formal thing or not is a matter of detail. As I see it sooner or later in the public perception at least, it will come out that he is the face of the party. Now that he has won Gujarat convincingly, Modi’s anointment will be that much
faster.

Now let’s look at the question of the identity of the party.  In this interregnum, when they were caught between finding a corporate identity and getting back to basics, the party decided that one of the things that had repelled people was that it had erred too much on the side of market economics.

There exists a powerful body of what I call the voodoo economists in the BJP or people around the BJP who have been talking about creating alternative Hindu and swadeshi models. None of these models have ever been translated into anything meaningful but they still retain a macabre appeal to some people.

What has resulted from this is, the BJP took a position of blind opposition to a lot of issues which they themselves advocated when they were in power. I can understand there were certain misgivings on details which were legitimate but the overall impression which came across was that the BJP was disputing the principle of this.

Likewise you have a situation where at the central level the BJP is coming across as a party that doesn’t stand for anything tangible. We know what it opposes but we don’t know what it supports. They’ve been taking shelter behind this idea of good governance. If you look at the performance of the BJP or NDA-run state governments it is actually very good: It is bound by a lot of administrative rigour and good pragmatic politics.

What they’ve done at the state level, which I think they could have sold far more assertively, is that they have policies which make entrepreneurship and enterprise easier. They don’t create obstacles in the path and they are not as committed to state sponsored programmes as the Congress is. These are important differences and those haven’t been brought out well.

One of the advantages of Modi is, he’s a man who is at the cutting edge of economic progress in India. Gujarat’s success in economic terms is staggering and widely acknowledged and at the same time he has a very non-statist approach that is very clearly discernible. How much of that he can bring to the national table is going to be the challenge.

Modi, too, comes with his own set of achievements – it is not just ‘Modi the charismatic individual’ or ‘Modi the contentious individual’. If the Modi leadership bit is a little clearer, I think we are likely to see the BJP getting more clarity on what its economics stand for.

Am I optimistic about the BJP in 2013? I’d say yes. The BJP itself should find reason to be a little more optimistic; it’s going to be a challenging project ahead of them and it is a project pregnant with possibilities. It is a worthwhile battle. There has to be churning.

The same faces remain; the BJP has stagnated in its ability to get new people into politics.

One of the reasons why it became such an exciting, albeit controversial, movement in the 1990s was that it got a lot of new people with new ideas. It brought a lot of new energy into the political spectrum. I believe this [2013] is an opportunity for them to instill in it a greater degree of energy and self renewal.

Tweets by @forbesindia
Letter From The Editor: Slow down, you move too fast
3 Big Issues We Hope Someone Is Worrying About