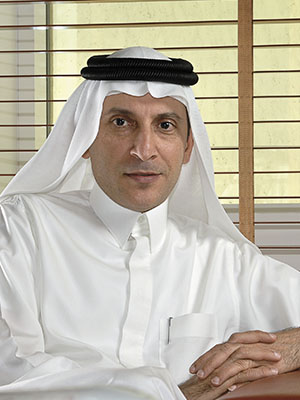 Qatar Airways has been in the news for two reasons: Postponing the launch of its Doha-Auckland flight—the longest commercial flight in the world at over 18 hours—by two months because of a delay in the delivery of its Airbus aircraft, and introducing the A380 aircraft on its Doha-Guangzhou route, the fourth destination of the bespoke super-jumbo aircraft after London, Paris and Bangkok.

Both these developments are representative of an airline that has soaring ambitions. It is also representative of the economic growth of the oil-and-gas rich country of Qatar over the last two decades: Qatar’s GDP has grown from $11.7 billion in 1997 to more than $210 billion in 2014, with its per capita GDP of $145,000 being among the highest in the world.

Qatar’s growth is symptomatic of the rise of the Gulf region as a strategic aviation hub that provides much-needed connectivity between the western and eastern hemispheres. Other regional powerhouses like Dubai and Abu Dhabi, part of the United Arab Emirates, operate well-financed, government-owned airlines, Emirates and Etihad Airways, respectively.

The two decades that have seen the phenomenal rise of the country and, in tandem, the growth of Qatar Airways is also the period when one man, Akbar Al Baker, has been at the helm of piloting the government-owned airline on this uncharted trajectory.

The son of a merchant with significant business dealings in India, trading in rice, spices, teas and incense, Al Baker studied at St Peter’s Boys School in Panchgani—the hill-station hub of residential schools in Maharashtra—and graduated from Mumbai’s Sydenham College of Commerce and Economics in the late 1970s. Al Baker’s parents bought him an apartment close to his college, in South Mumbai’s tony Cuffe Parade locality, which he still keeps. “I always feel good going to India,” he says. “I have a lot of friends who are industrialists, and your prime minister, whom I admire very much.”

After having worked at various levels in the Civil Aviation Directorate in Qatar, Al Baker became Qatar Airways’ group chief executive officer in 1997, when it had just four aircraft. Today, Qatar Airways operates 184 aircraft to more than 150 destinations across six continents, and has been named Airline of the Year by global industry audit Skytrax in 2015, 2012, 2011, and was the runner up in 2014, and 2013. (In comparison, Emirates, which started operations in 1985, has a fleet of over 230 aircraft operating to over 150 destinations.)

“It was a small regional carrier with four vintage aircraft [the average age of the fleet was over 22 years],” Al Baker says. “Currently, in our 19th year of operations, we have more than 40,000 employees and 13 subsidiaries that form the Qatar Airways Group of companies.” Al Baker claims that Qatar Airways now operates the world’s youngest fleet, with an average age of less than five years, a metric he intends to maintain. Qatar Airways’ current aircraft orders are worth $70 billion, and includes an order for 100 B777 9x and 8x aircraft from Boeing, which are expected to be replacement aircraft.

“Al Baker has transformed Qatar Airways from an unknown brand to a global mega carrier,” says Kapil Kaul, CEO, CAPA South Asia, an independent aviation consulting, research and knowledge practice firm. More importantly, says Kaul, Al Baker has been “consistently” driving very high-quality service and has created a global product, which has become the cornerstone of growth for the airline.

“His leadership is one of the reasons why Qatar Airways has become a world class brand in just two decades,” says Amber Dubey, partner and India head of aerospace and defence at global consultancy KPMG.

In addition to transforming Qatar Airways into a global powerhouse, Al Baker has also built a personal reputation of being a tough negotiator and straight-talker. This was evident in his spat with US airlines over their efforts to resist Middle Eastern carriers’ access to US markets, or his dismissal of calls by the International Labour Organisation to scrap the airline’s allegedly discriminatory employment policies.

“He doesn’t care much about his popularity ratings and doesn’t indulge in superficial congeniality. With him you get what’s in his mind. There are no pretensions,” says Dubey. “He drives himself and his people hard. But those who can handle the stress swear by him.”

In addition to his current role at Qatar Airways, Al Baker serves as chairman of the executive committee of the Arab Air Carriers’ Organisation (AACO), a body responsible for the development of the airline industry in the Arab world, and is also a member of the Board of Governors of the International Air Transport Association (IATA), a global regulatory body for airlines. 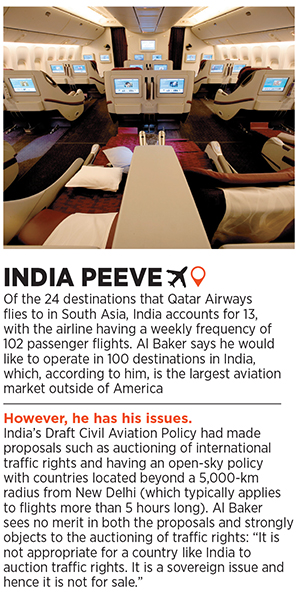 Having overhauled the airline, Al Baker is also playing an instrumental role in the way flyers travel, by moving away from the traditional three-class—first, business and economy—cabin layout.

“Most airlines are flying [nothing but] fresh air in their first class,” he says. “They are either upgrading their senior staff or frequent flyers to the first class. There is very little demand in the premium cabin. Only in certain sectors there is demand. Even on those sectors, in my airline, the demand is not 100 percent. It is only 60 percent.”

A majority of Qatar Airways’ fleet has only two classes—business and economy—with Al Baker claiming to have started the process of doing away with a first-class cabin 10 years ago. Six of the airline’s super-jumbo A380 aircraft and one A330-300 aircraft have a three-class cabin configuration, while eight of its narrow-bodied A320-200 aircraft, which fly in the Middle East region, have a first- and economy-class configuration. The rest of its fleet of commercial aircraft have only business and economy classes.

Al Baker explains that large corporations no longer fly their executives in first class. “People who used to travel in first class are now travelling in business, and people who were travelling in business are now travelling in premium economy. So there is no point of having a first-class cabin,” he says. “Do you know that British Airways is now going two-class [business and economy]? Emirates is also going two-class. When I started it, nobody believed me. I saw this coming.”

Is he then predicting the death of first class? “I think in most of the routes, yes,” he says, adding that the business-class experience, at least on Qatar Airways, is as good if not better than any first-class experience.

Seated in business class on board Qatar Airways’ A350 XWB aircraft, flying from Doha to Boston, Al Baker’s words ring true. From a menu of about 21 options (excluding the expansive non-alcoholic and alcoholic beverage menu), passengers can eat anything, anytime—an à la carte experience at 35,000 feet above sea level.

Further, with a 1-2-1 seating configuration, each business class seat slides into a lavishly large 80-inch full flatbed and is equipped with a 17-inch entertainment screen. The design and seat configuration ensures every seat has aisle access. Flyers are also treated to Armani toiletries and can access 15 minutes of complementary Wi-Fi internet connectivity.

“Qatar Airways is all about product and hospitality. We are always continuously raising the bar for passengers,” says Al Baker, who claims to taste every new food item before it reaches the menu.

Towards the end of this year, Qatar Airways is launching a new business-class product that will be retrofitted on all its aircraft. It’s a “top secret” project, says Al Baker. “The product will be patented so that no other airline in the world will be able to copy any of its amenities or its design. The manufacturers, both Airbus and Boeing, had to sign very robust non-disclosure agreements so that nobody gets any information about the product.” 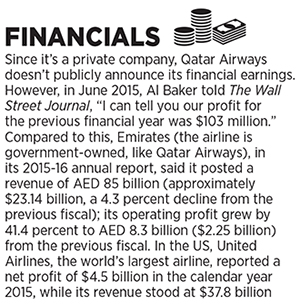 But Al Baker himself is prepared to fly economy when required. Over the last year, he has travelled many times in economy class, notably, around six months ago, when he went to meet the Sri Lankan president and prime minister. “None of my senior management can demand a premium seat if there is a [paying] passenger,” says Al Baker. By travelling in economy, he adds, “you are giving a message to your staff that nobody is above the rules of the company.”

Al Baker’s focus on revenue and passengers is perhaps the reason for the launch of Qatar Airways’ latest destination in the US—Boston—introduced this March, which takes its total number of North and South American destinations to 13. Boston is significant to Qatar, and the airline, because of the large number of Qatari nationals who frequently visit the city for medical treatment and also because of the large contingent of Qatari students studying there. Boston’s home state Massachusetts is home to some of the most notable educational institutions in the country, including Harvard University, Massachusetts Institute of Technology and Berklee College of Music.

Qatar Airways, says Kaul, is a “strategic success” and “has delivered for Qatar Inc what was expected”—the creation of a global airline that would make the Arab nation an aviation hub by connecting the East with the West.

But even as Qatar Airways chalks out an aggressive network expansion for 2016, what excites Al Baker the most is to sit in the cockpit—he holds a private pilot licence to fly ‘prop aeroplanes’ (single-engined propeller aircraft). Taking charge of the controls is, of course, what he does best, as he has amply demonstrated over the last 19 years.