A gradual process of recovery is unfolding at Suzlon, or so improved growth, profitability and debt numbers—and Tulsi Tanti's confidence—seem to indicate 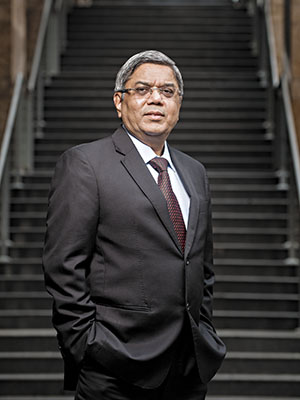 Image: Vikas Khot
Chairman Tulsi Tanti has put Suzlon on the path of redemption with his resolve and focus

A year ago, Tulsi Tanti, the 58-year-old chairman of the Pune-based wind turbine maker Suzlon, decided to set his ego aside—at the right time—to bring his company back to financial health. This included divesting the crown jewel of his business, Senvion, a German wind turbine manufacturing company acquired in 2007, and parting with a significant portion of his shareholding in the company he founded in 1995. He also took the help of lenders and friendly investors to fix his company’s liquidity challenges, which had forced operations to come to a near standstill. The intention was to grow the core business and lead Suzlon to profitability once again.

Today, it is fair to say that Tanti seems to have put Suzlon Energy on the path to redemption. You can see it in the pride on his face; you can, more importantly, see it in the numbers.

The wind in Suzlon Energy’s sail appears to be back as it reported its first annual net profit in seven years. With robust growth across operating revenues and profits for the financial year ended March 31, 2016, a gradual process of recovery is unfolding at Suzlon, just as Tanti said it would when he spoke to Forbes India last July.

Suzlon recorded a turnover of Rs 8,259 crore in FY16, up by 69 percent year-on-year. The company’s Ebitda (earnings before interest, tax, depreciation and amortisation) is at Rs 1,295 crore versus a loss of Rs 166 crore in FY15, with a healthy Ebitda margin of 15.7 percent. Suzlon reported a net profit of Rs 539 crore, against a loss of Rs 9,355 crore in FY15. The net profit was largely the result of a one-time gain of Rs 1,039 crore on account of the sale of Senvion in 2015. But even without this, Suzlon reported a net loss of Rs 24 crore, a considerable improvement over the loss of Rs 2,376 crore—excluding one-off items—in FY15. (In fact, Suzlon’s acquisition of Senvion—executed in phases between 2007 and 2011—was one of the reasons it landed in the debt trap that hampered its growth.)

“Reporting a profit for fiscal 2016 is an extremely important and valuable milestone for the company,” Tanti tells Forbes India. “It has helped in significantly enhancing the company’s credibility among stakeholders and boosted investor confidence.” It has also proved to be a source of motivation for employees, adds Tanti. “When we were struggling over the last three years, the team was preoccupied with crisis management rather than focusing on the actual project execution,” he says. “But the team is now motivated to grow the business as there is visibility on where we want to go from here.”

Down with debt
A combination of factors—the financial crisis in Europe, a slowdown in the wind power sector in India, and aggressive international expansion leading to a highly leveraged balance sheet—had pushed Suzlon into a corner in 2012-13. It had become the largest defaulter on repayment of foreign currency convertible bonds (FCCBs) in India, a considerable slip in perception from being one of the world’s largest wind turbine makers.

Things have altered for the better there. Suzlon’s consolidated long-term, rupee-denominated debt stood at Rs 3,033 crore in FY16, compared to Rs 10,100 crore as on March 31, 2015. As far as the dollar-denominated debt is concerned, the outstanding FCCBs on the company’s books have come down to $249 million from $328 million in FY15. The credit-enhanced debt taken by the company (backed by a standby letter of credit from the State Bank of India) remains at the same level as last year at $647 million, but significant repayment on this isn’t due before FY23. Kirti Vagadia, Suzlon’s chief financial officer, tells Forbes India that the company had reached an agreement with lenders to extend the maturity of this debt till 2022-23 (from 2020-21 earlier). Consequently, a bullet payment of $657 million, which the company was supposed to make in FY18, is due only in FY23 now, Vagadia says. He also adds that the company is in talks with lenders to assess if it can repay this debt in larger installments ahead of the due date, instead of coughing up $657 million at one go.

Getting help from lenders to restructure outstanding debt, as well as bringing in Dilip Shanghvi, chairman of Sun Pharmaceutical Industries, as a white knight investor (in February 2015, Shanghvi invested Rs 1,800 crore for a 23 percent stake in Suzlon and also agreed to extend additional working capital to the company) has worked as Suzlon has been able to focus on growing volumes again in FY16.

The company delivered wind energy equipment to support 1,131 MW of power generation in FY16, two-and-a-half times over the previous fiscal; it has commissioned wind power projects, on behalf of clients, worth 900 MW in India, double of what it did last year. With the level of wind power generation capacity that Suzlon helped commission in India in 2015-16, its market share in India has risen to 26 percent from 19 percent in FY15. Simultaneously, the company took fresh orders for 1,251 MW in FY16, a little over three times its 2015 number.

With the Indian wind energy market expected to grow at a compounded annual growth rate of 30 percent over the next five years, Tanti is confident that Suzlon will grow faster than the industry and is targeting a 40 percent share of the market by the end of FY17.

Operations focus
But fiscal 2016 hasn’t only been about kick-starting volume growth after addressing liquidity challenges; the company has also utilised the crisis to bring in better operating practices, prudent working capital management strategies and strengthening the management team to ensure future growth, according to Vagadia. “The entire organisation has been trained to regain credibility across stakeholders. Giving a commitment to a customer and not honouring it is not acceptable any longer,” Vagadia says. With most of the liquidity challenges behind it, Suzlon is focussed on executing orders in a timely and profitable manner, he adds. “We no longer accept orders that do not match our threshold of profitability, or which are cash flow negative.”

Tanti also points out that even during its troubled phase, Suzlon didn’t stop investing in upgrading technology to improve productivity of a new range of products—turbines and rotor blades. Suzlon’s new line of equipment helps increase the plant load factor of wind power installations to around 40 percent from 30 percent earlier, and allows production of wind energy at sites that were earlier unviable. “All of this will help us grow the business in India and remain competitive, even as the cost of renewable energy keeps coming down,” Tanti says.

“The company argues that its new products, which offer around 15-20 percent better yields should be able to offset the impact, if any, from the phase out of accelerated depreciation and generation-based incentive schemes,” says an HSBC research report dated June 1, 2016.

Suzlon is also mindful of the government’s target of generating 100 GW (1 GW is equal to 1,000 MW) of solar power by 2022—and knows it cannot afford to miss out on the opportunity. The company has already won a bid to develop a 210 MW solar power project in Telangana and will be bidding for more such assets. While it will capitalise on its project management skills to develop and maintain these assets, it doesn’t intend to retain their ownership for long. Consequently, on June 20, Suzlon signed an agreement to sell a 49 percent stake in a 100 MW solar energy project (part of the 210 MW won from the Telangana government) to CLP India, the Indian arm of the Hong Kong-based power company. CLP India has the option to acquire the remaining stake post commissioning in May 2017. This is a strategy for diversification that Suzlon will continue with, says Tanti.

Recouping Net Worth
But even after the encouraging financial performance, years of strain have led to a negative net worth of Rs 7,077 crore as on March 31, 2016. The company aims to recoup this over the next three to five years on the back of greater estimated operating profits, further conversion of FCCBs into equity shares, and some amount of long-term capital to be raised at the level of some group companies at a cheaper cost of borrowing.

Suzlon has also strengthened its management bandwidth over the last one year, making two key hires. It appointed JP Chalasani, former CEO of Punj Lloyd and Reliance Power, as group CEO; it has also brought in Rakesh Sarin, a former senior executive at Finnish power company Wärtsilä Corp as the CEO of its international business and global service division.

If the momentum of the earnings for the January-March 2016 quarter continues, the next year looks even better for Suzlon. The company reported a consolidated turnover of Rs 3,240 crore during the quarter, up by 423 percent year-on-year, with an Ebitda of Rs 450 crore versus a loss of Rs 220 crore earlier. “We remain confident on Suzlon Energy regaining market share leadership in FY17,” another HSBC research report dated May 31, 2016, notes.

Whether Suzlon’s FY16 financial performance is an indicator of a full recovery remains to be seen. But Tanti is confident that in FY17, Suzlon will be able to report a net profit purely on the back of its operational performance —without any exceptional gains.