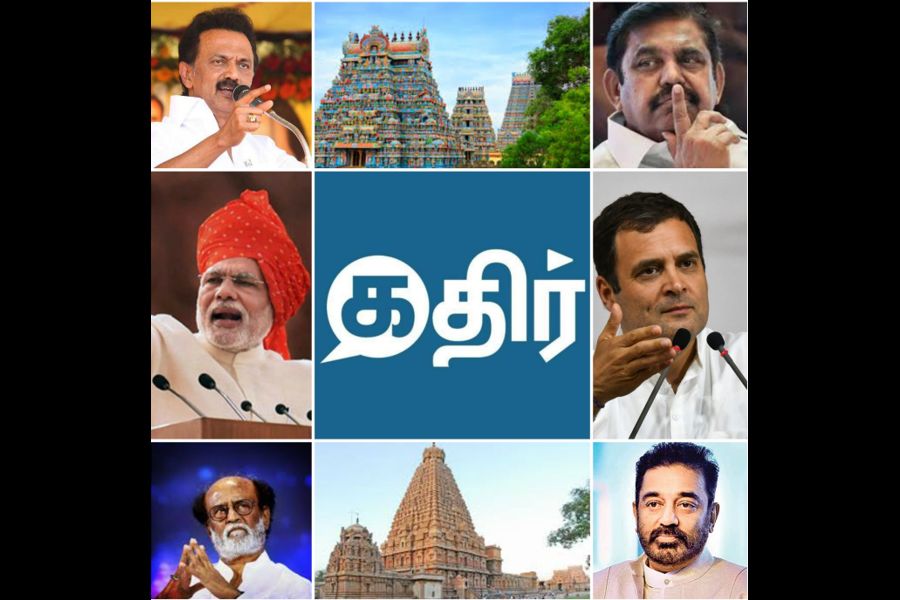 Gone are the days when news reached people through state broadcasters and newspapers run by a few established groups. Today, with the advent of social media, an incident happening in Guatemala City reaches a person in Gummidipoondi in lightning speed. Social media opened up avenues for several digital media outlets to come out with content in several forms. However, in a space that is already crowded, it is difficult to establish oneself as a leading player with quality content. But, Kathir News has managed to do that. Kathir News is a Tamil digital news platform that brings out news and opinions on Tamil Nadu, regional and other national issues. Founded in the year 2018, the platform provides objective and fact based analysis of current events rather than resorting to narratives that stirs up emotions. Apart from politics, Kathir News also covers spirituality, cinema, and lifestyle content. Kathir News also has an exclusive section that busts fake news quite often peddled by both mainstream and social media. Founder of Kathir News, Mr. SG Suryah says that “For long the media space was under the hegemony of a select few. But digital news media has changed all that. We are now an established Tamil media news outlet with an exclusive set of audience.” Pradeep Gunasekaran who is Co-Founder says that the year 2014-15 saw the spurt of digital news publishers. “Though we were a little late to the party, we have managed to identify and capture a market.” Today, on an average, Kathir News clocks around 4 Million hits a month. It also has a wide presence in social media with several thousand followers across different platforms like Facebook, Twitter, Youtube, ShareChat, DailyHunt, Jio News etc. Speaking about the impact of Kathir News SG Suryah says that mainstream media and social media pages in Tamil Nadu resort to spreading pessimism. “Kathir attempts to tell the people about the good efforts of the State and Central Governments like the MUDRA loan scheme for small traders, the Sukanya Samridhi Scheme for women and then, the PM’s housing scheme”, says Suryah. Kathir News focuses on coming out with factual data and reports on different developments across the country with a special focus on Tamil Nadu and counters misinformation that are spread as forwards in social media, adds Pradeep Gunasekaran. Kathir News in the past has busted several myths about different issues. Political parties in Tamil Nadu and several media outlets said that most students in Tamil Nadu were being forced to write exams outside the state. In both cases, the reports were fake and the fears were found to be exaggerated. Another time, Nirmala Sitharaman who was then a Defence Minister had called the army as her ‘parivaar’ (family) but mainstream media in Tamil Nadu twisted it as referring to Sangh Parivar (RSS and BJP) which was busted by Kathir News. Even in the case of (Tamil movie super star) Rajinikanth, the MSM found fault with his question, ‘which seven people you are talking about’ as he was totally unaware of the development with regard to the convicts sentenced in Rajiv Gandhi assassination case. The media put out reports saying he doesn’t know anything about the seven people though he has good relations with their advocate. It is not that the all has been rosy. “We had to overcome several hurdles considering that there media is highly politicized in Tamil Nadu where apart from party run media outlets other mainstream media supposedly neutral also tow a line that is inclined to one party and one ideology.” Pradeep says. Due to its heavy criticism of the Dravidian parties especially the DMK, Kathir News had come under attack from the DMK IT cell. The Twitter and Youtube account of Kathir News became inaccessible after bots hit the ‘report’ button on its pages. Recently, the DMK IT Cell head P Thiaga Rajan had listed out several media outlets critical of the party and discredit them as ‘fake news websites’. However, Suryah and Pradeep say that it turned out to be a huge publicity for their brand. “It is not that we are not open to criticisms. We want people to critique our work. We look forward for constructive criticism that will help us improve what we are doing. We do not pay attention to trolls” Suryah says. Following Kathir News, many Tamil news outlets started coming up seeing that there was response in the market. But Kathir News has established itself as a leading player in churning out good Tamil content. “We are not complacent. We aspire to become one of the finest digital news publishers. As of now, we do not have plans to expand in other regional languages as we aim to penetrate within the huge Tamil audience.”, Pradeep says. Kathir News is coming out with exclusive video shows on their Youtube channel and also a print magazine soon. Disclaimer: The views, suggestions and opinions expressed here are the sole responsibility of the experts. No Forbes India journalist was involved in the writing and production of this article.