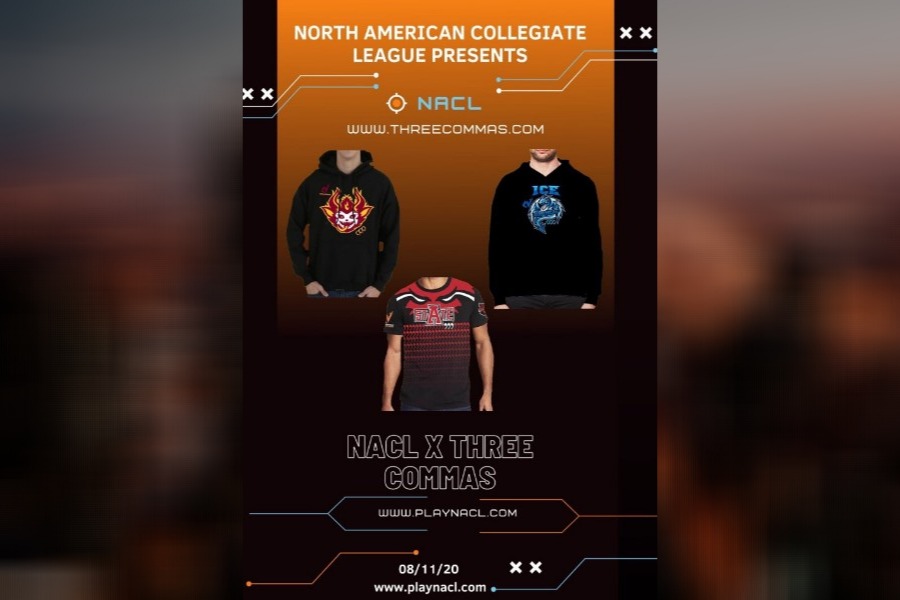 This is an exciting season for E-sports and gaming enthusiasts as the North American Collegiate League (NACL) releases its first exclusive merchandise with Mark Cuban’s Three Commas clothing line. Known as the NACL Collegiate Collection, fans and gamers can choose from five items that are presently available from hoodies to limited edition jerseys. The hoodies and jerseys are limited edition and are now available to buyers on ThreeCommas.com. The NACL Collegiate Collection features gamers’ favorite collegiate teams, which include NACL itself, ICEBRKRSCLAN, Arkansas State and ASU League of Legends team. The organization is also looking at featuring other brand ambassadors, including NFL Hall of Famer Brian Urlacher, 49ers WR Dante Pettis, and NFL Linebacker Alvin Jones.  Fans of former MLB star Brian Anderson and former NHL star Jeremy Roenick should also be excited as their names are part of the roster. Fans can also look forward to having former NBA players Hall of Famer Rick Barry, Fat Lever, Vinny Del Negro, former Notre Dame star Rex Plueger, and NASCARS Anthony Alfredo on the list. Professional Madden player Pavan Lakhat, professional NBA2k player Moshood Shockey, and famous YouTuber Overtflow are also personalities that fans should look out for.  David Chen expressed, “We are excited to bring on brand ambassadors such as NFL Hall of Famer Brian Urlacher, NFL Players Dante Pettis, Alvin Jones, Aaron Jones, Former MLB Star Brian Anderson,  Former NHL Star Jeremy Roenick, Former NBA Players, Basketball Hall of Famer Rick Barry, Fat Lever, Vinny Del Negro, Former Notre Dame Star Rex Plueger, Pavan Lakhat Madden Pro, Moshood Shockey NBA2k Pro, YouTube and TikTok Sensation Overtflow, and partnerships with Mediabundance with David Meltzer, Mike Mumola, David Moreno, Former CEO of Deloitte and current CEO of Samling Group Lawrence Chia, NACL CLO Krishna Vasudevan, NASCAR Driver Anthony Alfredo, EDM DJ Funtcase, English Premier League’s Wolverhampton Wanders, Wolves Esports, Live CGI, DealRockit, ConsenSys, and VY Esports. We are trying to give college esports athletes a chance to go pro, while interacting with the pros and athletes on a global scale, while streaming them on Huo Mao in Asia.” NACL Board of Directors assures their followers that this season is just the beginning of much more merchandise that will follow in the future. Each merchandise will feature a different university partner. The NACL is a not-for-profit esports and entertainment organization based in America that streams and hosts live video game tournaments. They also stream season-long league play and live events involving collegiate gamers from different parts of the world. They are excited to open their market up in India to allow the best players compete in global collegiate and open tournaments. What makes the organization stand out is that its prizes are commonly in the form of scholarships. In doing this, the organization hopes to create a community that is united among those who are new in esports, established gamers, and even those who are outside simply looking in. NACL has TV streaming with iSunTV in seven different countries, including Japan, South Korea, China, Taiwan, Malaysia, Hong Kong, and Macau. David Chen believes that in passionately doing this, the organization is bridging the gap between esports and traditional sports. Other games available on NACL include famous titles such as Counter Strike, DOTA 2, League of Legends, Fortnite, Madden, Overwatch, FIFA19 and much more. Years from now, the NACL leadership wishes to see the organization become a household name that will continue to make a positive impact on the lives of the younger generation. Website: PlayNACL.com Three Commas Website: ThreeCommas.com Disclaimer: The views, suggestions and opinions expressed here are the sole responsibility of the experts. No Forbes India journalist was involved in the writing and production of this article.