Left to fend for itself, India is now finally developing new drugs on its own 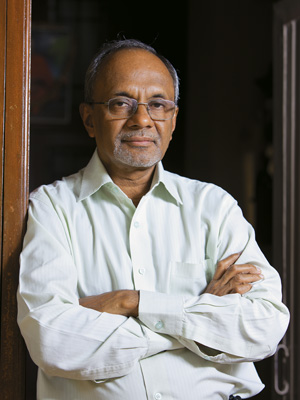 Image: Mallikarjun Katakol for Forbes India
OPTMISTIC T Balganesh, the chief of the OSDD drug development unit, is looking for a big shift in the drug discovery process

Crowdsourcing can boast of many success stories today, but in 2008, when the Council for Scientific and Industrial Research (CSIR) launched such an effort for drug discovery, there weren’t many. Four years on, its Open Source Drug Discovery (OSDD) network is emerging as a cyber platform to garner resources for developing drugs that pharmaceutical companies don’t find attractive enough.

On World TB Day on March 24, when OSDD and the Global Alliance on TB (GATB) in New York announced that a new TB molecule will undergo Phase IIb trial in India, even as it is being tested in Brazil and Africa, it was a sign of serious commitment from CSIR. If the molecule shows promise, it can advance into further studies and be included in treatment more quickly. India detects 1.7 million new cases of TB every year.

“Realistically speaking, open innovation is the future of drug development,” says Samir Brahmachari, director general, CSIR. He got OSDD off the ground with a seed fund of Rs 50 crore in September 2008 and has sought Rs 1,700 crore in the 12th Plan. “I am sure even with the revised economic growth rate, we’ll get Rs 800-1,000 crore,” he says.

Hopefully, the funds will arrive soon. CSIR is yet to spend its seed money since substantial free help poured in during the initial phase, including assistance from Infosys to build the portal. But it’s the human capital that Brahmachari and the heads of six business units of OSDD are more preoccupied with. There’s limited drug development expertise in the industry, let alone research institutions. In December 2011, in one of the five newly created posts, CSIR appointed T Balganesh, former head of R&D and managing director of AstraZeneca India, as the chief of the OSDD drug development unit.

Now the programme is set to steamroll. With the GATB molecule, there will be immense learning for India in the next 12-16 months, says Balganesh. Having spent 25 years in AstraZeneca, he knows how drugs are developed, but more importantly, he has seen first-hand how the big pharma model of drug discovery has been falling apart. He says he is convinced that if India has to have drugs for neglected diseases, it has to develop them on its own. China has moved on similar lines, investing over $500 million in domestic programmes.

As a mentor for all CSIR drug discovery efforts, Balganesh is positioning OSDD as the de facto “application” platform for the country. “We need to break away from the big pharma mould and try risky routes… look for a big shift in the discovery process,” he says.

If OSDD participants manage to develop a molecule to reduce sputum bacteria, even in a week’s time it will have enormous public health benefit. Then, in another big shift, the drug could be delivered through aerosols, like asthma inhalers. “This may not cure the disease, but it will impact the public health system. I am asking people to come up with novel ways of hitting the [TB] bacteria,” says Balganesh.

So far, the network has crowd-pulled some 5,500 participants in 130 countries, 80 percent of whom are in India. From the “healthy-looking front end”, two anti-TB molecules are in advance stages of research, though they are still two to three years away from clinical study. The malaria and Leishmaniasis programmes have just taken off. However, it’s the late stage research that needs strengthening where molecules, proverbially, die like flies.

It’s for this purpose that an innovation centre is being built in Mumbai. It will do pre-clinical work, says Ram Vishwakarma, director of the Indian Institute of Integrative Medicine (IIIM) in Jammu. His institute developed, in partnership with Cadila Pharmaceuticals, a new combination drug for TB in 2009. With the antibiotic rifampicin dose almost halved, the new drug risorin is much safer. 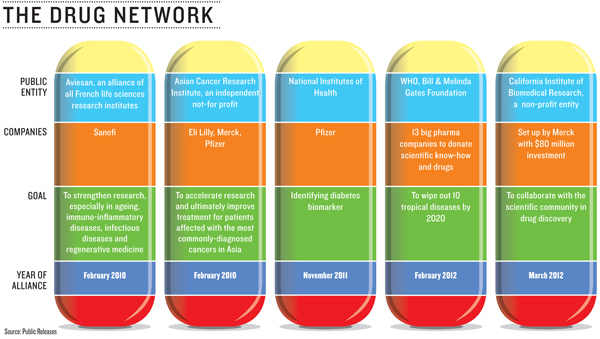 Vishwakarma, who was earlier with Piramal Life Sciences in Mumbai, is now using OSDD to file an Investigational New Drug application with the US Food and Drug Administration so that risorin could be taken to other markets. “I am driving such programmes as it would be driven in the industry—even outsourcing to contract research organisations,” he says.

Meanwhile, Balganesh wants to groom OSDD as an institution which life sciences companies can effectively use to drive common goals such as biomedical breakthroughs. All this would require more than just capital investment. Researchers today file patents only to be able to publish. They often don’t use the 18 months that it takes for the patent application to become public for bulwarking their patent. Consequently, the patents remain weak and unfit for commercialisation, a reason why companies don’t make a beeline to commercialise them. Balganesh and Vishawakarma believe this hole can be plugged with OSDD resources.

In drug research, the network effect is multiplying (see graphic). The medicines of the future will come from innovation networks which will comprise of numerous stakeholders, says Kenneth Kaitin, professor and director, Tufts Center for the Study of Drug Development at Tufts University School of Medicine in Boston.

“Although India may currently lack the infrastructure for moving forward with some of these open source initiatives, I think the brain power and commitment are there, and I have no doubts that OSDD will not only succeed in India, but will eventually flourish,” he says.

Show More
Get the latest stories, videos, and podcasts from Forbes India directly in your inbox every Saturday
Thank you for your comment, we value your opinion and the time you took to write to us!
Comments 31