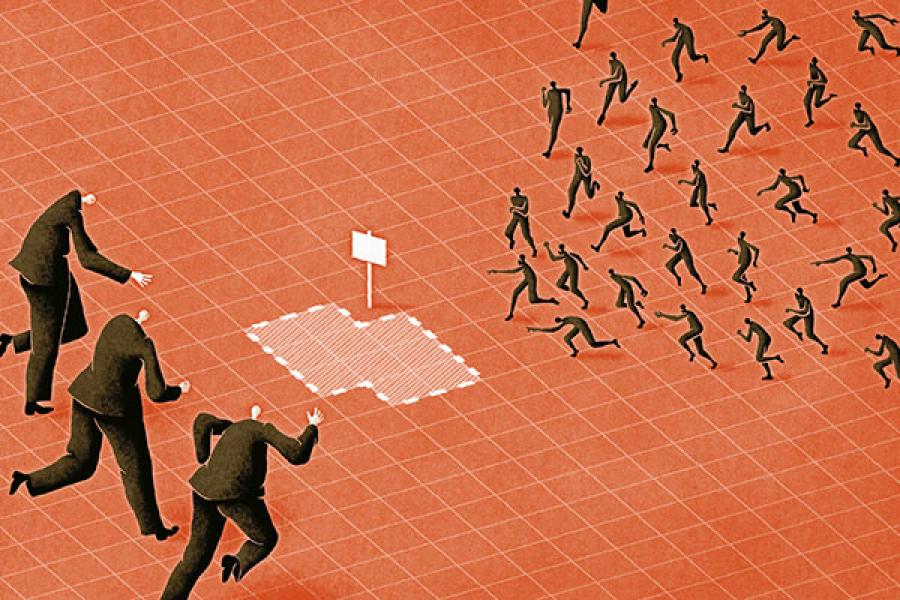 Image: Corbis
Mutual funds will be selling their funds through brokers, while also competing with them for investors

A new set of guidelines will begin to govern mutual funds distribution from January. Capital markets regulator, the Securities and Exchange Board of India (Sebi), hopes that the new rules will encourage mutual funds and their brokers to not only spread to smaller towns and villages, but also goad them into looking beyond commissions. The intention looks good, but the results may not be as expected by Sebi.

Until a few years ago, mutual funds thrived on the salesmanship of independent distributors who canvassed investors for a commission, which was paid by the funds from an entry fee charged to new investors. In 2009, Sebi banned such entry loads, thus significantly curbing the funds’ ability to pay huge commissions and take agents on lavish foreign trips.

This, in turn, affected sales. Listless stock markets did not help either, and the funds kept badgering Sebi for a change in rules, maintaining that its shackles were slowly choking the industry.

The new Sebi guidelines bring the broker back into the game, but also aim to force them to evolve from being mere product pushers to financial advisors. Not everybody is happy about this.

The new guidelines are supposed to give incentives to distributors to sell mutual funds outside the top 15 cities. Mutual funds will be able to charge a fee (known as an expense ratio) of up to 0.3 percentage point more for expenses on the investment flows from small cities and towns. The extra cash can go to distributors who help canvas investors from such uncharted territories.

The new guidelines allow funds with a corpus of less than Rs 100 crore to charge 3 percent of the corpus for expenses, up from the earlier 2.5 percent.

“This is a very difficult thing to put into practice, as some distributors might give the native addresses of some investors to get that extra commission, even when the investor lives in one of those [big] 15 cities,” says a wealth manager from Mumbai.

Rajiv Bajaj, vice chairman and managing director of Bajaj Capital, believes the new rules will change the approach to distribution models. Bajaj Capital is the 12th largest distributor of mutual funds, at Rs 36 crore, based on FY2012 (financial year 2011-12) data from the Association of Mutual Funds in India (AMFI).

“I think the mutual fund industry is slowly moving to the advisory model, which might take some time to become a reality. But, fact is, there is a lot of business for the distributor in this model. For the first time, distributors are looking at a model that will be entirely concentrated on trail-based commission and advice to clients in order to retain them as a long-term proposition,” he says.

This means mutual funds will be selling their funds through brokers, while also competing with them for investors. Many distributors feel they will be increasingly marginalised as investors will eventually shift to the direct plan.

Some distributors are thinking of an advisory model, where they will guide investors to the direct plan for a fee. But the large majority of distributors do not agree, and mutual funds also support their view.

“Investors do not pay advisory for FDs, insurances or any other financial product. Why will they pay fees to mutual fund distributors? The advisory model is a dream that will take a long time to become successful in a country like India,” says the CEO of a mid-sized fund.

Yet, some are giving it a shot. Jaydeep Kashikar’s firm Brain Point Investment Centre is based on the advisory model alone. He says an honest advisor gets his fees, provided he can quantify his services to the client. “At our end, the advisory model is working. We are looking at the interest of the investor and not misselling. People are ready to pay when they see the benefits of our advice,” he says.

Dayal says he relied entirely on the advisory model to sell his fund, which now has an asset of around Rs 135 crore.

“Our strategy is to get the informed investor who may invest a lesser sum rather than just gathering a huge corpus. In that sense, we ‘advise’ investors. India needs a generational change of discarding the old ‘your money is my money’ distribution model and moving to a more transparent advisory model where the client knows how much the distributor or advisor is getting paid. And the service—the advice given—can be measured for its outcome,” he says.

In India, there are 44 asset management companies (AMCs) managing up to Rs 7.68 lakh crore. The top five managers account for around 54 percent of total assets.

The smaller AMCs feel that the Sebi guidelines are getting the distributor back into the game but only for the big funds, which have saturated the big cities. These are the funds that can afford to pay high commissions to brokers and, at the same time, are setting up their own teams in smaller towns.

A Mumbai-based distributor believes Sebi has messed up with its guidelines because it will be difficult to keep a track of the sales practices in smaller towns and cities. He says Sebi has created enough incentives for misselling in smaller towns.

Tweets by @forbesindia
More About Mxit: Africa's Largest Social Network
Our Own Random Acts of Charity