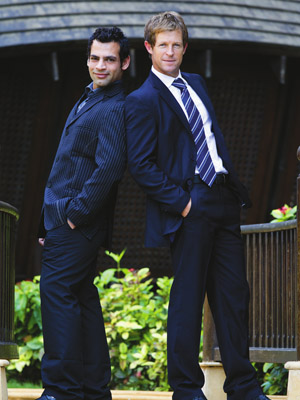 Mention Jonty Rhodes and everyone talks about his incredible fielding abilities; about that run-out of Inzamam-ul-Haq in the 1992 World Cup, about him defying gravity with his on-field acrobatics and how the world has never seen a fielder like him since he retired in 2003. Few people, however, know that Rhodes is also a serial entrepreneur.

In 2008, he started 10 Chapters with United Vintners, the wine arm of United Breweries to import South African wines to India. In 2009, he brought wind turbines from Scotland to South Africa. Both ventures bombed.

Now, he is set to walk out to his second business innings in India, in partnership with Mumbai’s Aatikaay Narula (31), who has been in the business of health supplements for the past six years.

Their venture, Evolution Sports Nutrition (ESN), is a range of nutrition and wellness supplement products for middle class India. He and Rhodes hold almost equal stakes in the company and while Rhodes is on the board of directors, Narula is the CEO.

The supplement business in India is unregulated, unorganised and unstructured and is similar to what the South African market was in the late 1990s. It has taken over a decade of regulations to segregate over-the-counter and prescription drugs.

Rhodes wants to make sure he cracks the Indian market this time around. 10 Chapters grossly overestimated its potential and paid the price for it. “Everyone talks about the size of the Indian market. People say even if we can get just 0.5 percent of it we are sorted. The logic behind exporting wines to India was that the country has a billion people, and even though a lot of people don’t drink wine, a lot of them are talking about it. But it’s mostly expats and people who drink in five star hotels,” says Rhodes. “It’s not the average man.”

The distributors of 10 Chapters did not focus on their products. Logistics was another issue. They over-estimated their reach and went for a pan-India model. “Getting the product from point A to B was a big problem,” says Rhodes. The duties were too high and they priced the South African wines out of the market. “If I had known the market better, I would have introduced our wine on a smaller scale; not sold it in 750 ml bottles, but smaller ones, so that people could try it out without paying a bomb.”

ESN has tied up with Future Group to distribute their products, and with high-end pharmacies and gyms to retail them. “We have an intensive plan in four cities: 220 outlets in Delhi, Mumbai, Bangalore and Pune,” says Narula. The average cost of their products for a month is Rs. 2,000. “All products are ISO certified, which means we guarantee there are no drugs in them,” says Rhodes.

From the looks of it, Rhodes has got his fielding placements right. All he has to do now is make sure he doesn’t drop the catches.

Tweets by @forbes_india
Karl Slym - People Don't Hold Back in India
Satyajit Das: It's a Gigantic Train Wreck. And We're All Stuck in It