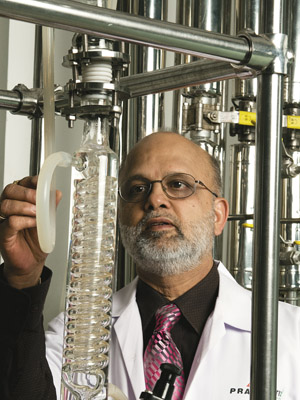 As global players continue to debate the use of food crops for the production of biofuel, Praj Industries has chosen an alternative path. The engineering company has started work on second generation biofuel, which—unlike first generation biofuel—does not require any specific crop as feed.

After three years of technology development and plant engineering, Praj is now building a commercial scale demonstration plant to produce ethanol—also called cellulosic ethanol—from biomass, which could be any form of agricultural waste, such as wheat and paddy waste, or wood chips.

“For many years, people have been saying that cellulosic biofuel is ‘round the corner’, but now it’s a reality,” says Pramod Chaudhari, chairman of Praj. His company signed an agreement with Danish enzyme maker Novozymes in 2009 for joint R&D on cellulosic ethanol. During this period, Novozymes reached its third generation enzymes. Apart from these enzymes, Praj uses a few other micro-organisms in its various downstream processes.

Most cellulosic biofuel producers use enzymes, yeast or algae to break down biomass into sugars for fermentation. This has led many chemical companies to team up with oil or engineering services firms. For instance, Dutch chemical company DSM has tied up with America’s largest ethanol maker POET; DuPont with industrial contractor Fagen Inc.; Novozymes with Italy’s M&G; BP Biofuels with DSM and Texas AgriLife Research.

Gaining an edge
As it faces stiff competition from global giants, Praj is banking on its integrated solutions—a mix of technology and engineering. Most other companies have standalone systems to produce biofuel, whereas Praj aims to provide bolt-on units that can be added to existing plants.

The company also considers its multi-feed technology—which allows the use of biomass from different sources—to be a bonus. “As an integrated player, we can also be technology agnostic,” says Balu Sarma, its chief technology officer. He believes Praj’s offerings “will reduce Capex and improve operating time for its customers.”

In 2003-04, Praj took up the concept of ‘smart distilleries’, with multi-feed and multi-product capabilities. Chaudhari says he is including some of these capabilities in cellulosic ethanol technology.

Biofuel makers will get a choice in the kind of biomass and kind of product—ethanol and/or some other chemicals—they want to produce. This option, Chaudhari hopes, will give Praj a large share of the cellulosic ethanol market.

The global cellulosic ethanol market is estimated to be worth between $75 billion and $140 billion by 2020, according to McKinsey & Co. And this time, most companies are relying not on subsidy but the US government’s mandate to generate about 16 billion gallons of cellulosic ethanol by 2022.

“New plants that are coming up may succeed in replacing corn-based ethanol, which is under considerable attack because of the impact of high corn prices on food and cattle feed markets,” says Robert Stone, managing director and research analyst at Cowen Group in Boston. However, any new biofuel will make sense only if it is less expensive to produce. “We think that plants whose economics depend on artificially high prices for cellulosic ethanol face significant risk, especially as more fully functional true [cellulosic] drop-in [replacements for gasoline and diesel] begin to be produced.”

Unpromising home ground
In India, theoretically, there’s sufficient biomass that can be used in various processes. A 2011 Bloomberg Energy Finance report says 125 to 183 million tonnes of biomass residue will be available in India by 2020 for making next generation ethanol, without any change in land-use patterns.

This quantity of biomass could meet up to 59 percent of India’s petrol demand in 2020, and reduce road transport greenhouse gas emissions by 47 percent to 69 percent.

Unfortunately, policy instability is a drag on market expansion. Although the current fuel policy necessitates a 20 percent ethanol blend by 2017, even the five percent blend that came into practice a few years ago is not fully implemented because there isn’t enough ethanol being produced.

Even a small policy intervention can turn the tables, says Choudhari. If, every year, the government keeps aside even 30 percent of the 16 to 20 million tonnes of molasses for turning into ethanol, it would produce enough ethanol for a 10 percent blending.

The demonstration plant that Praj is building can take 100 tonnes of feed per day, and manufacture up to 100 million litres of ethanol per year. This would vary according to feedstock and process configuration.

It’s a good technology, and Praj can extract many value-added products from it, says P Padmanabhan, executive director (refinery coordination) at Bharat Petroleum. But he is not convinced that ethanol can make a dent in the overall demand for crude oil, primarily because the volumes are so high that it requires long-term mandated targets, policies and penalties to ensure its implementation.

“The government has to give incentives to people for bringing biomass to collection centres; oil companies are not equipped for collection,” he says.

The lack of government policy and its implementation is making Praj target the global market, especially regions in Europe, China, Latin America and the US, where several plants are being built. Nearly half of Praj’s 2012 revenue of Rs 880 crore is coming from abroad.

But the Indian market does not seem to have woken up to the company as yet. Stocks remain at a three-year low. And the major reason for this, says Chaudhari, is the low level of awareness in India about the development of cellulosic ethanol technology and its potential, when compared to the US and Europe.

“This [2013] will be a defining year for Praj,” says Chaudhari, as he expects his ethanol business to be dominated by second generation biofuel by 2015.