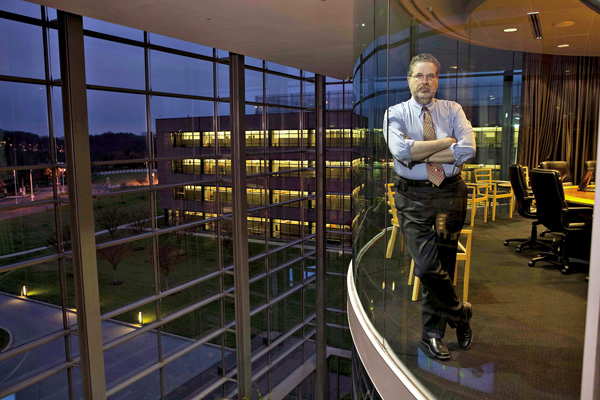 Emilio Emini’s battle with germs started early, when he was a working-class kid growing up on Sullivan Street in Manhattan’s Greenwich Village and was one of the first kids to get the oral polio vaccine — administered on a sugar cube. If you ask him when the last outbreak of measles in the US occurred he’ll instantly tell you it was 1964, because that’s when he caught it.

Fifty years later, he’s finally got the upper hand on his longtime adversaries. Emini, 58, is head of vaccine research at Pfizer, the world’s largest drug company, where he’s pushing forward on a pneumonia vaccine called Prevnar 13. With $3.7 billion in annual sales Prevnar is already the bestselling vaccine in the history of drug research and the biggest product that Pfizer got from its $68 billion purchase of Wyeth in 2009. Sales could grow 60 percent to $6 billion by 2015 based only on the use of the vaccine in children, according to investment bank Sanford C. Bernstein. If Emini can prove its effectiveness in adults — which he is close to doing — it will add another $700 million during that time period, Bernstein says. Pfizer thinks the adult market is even bigger: $2 billion.

As anyone in the drug business will tell you, the timing couldn’t be better for Pfizer, a $68 billion (sales) company with one of the worst track records for developing breakthrough products in the industry and a stable of top-selling drugs fast losing patent protection. After the legendary $11-billion-a-year cholesterol drug Lipitor goes generic at the end of November, Prevnar will become Pfizer’s top seller. Pneumococcus causes 175,000 cases of pneumonia that require hospitalisation and 6,000 deaths every year in the US.

That makes Emini critical to the company’s fortunes, though you’d hardly know it from talking to him. “The rush comes from the fact that once you introduce a vaccine, if it’s a successful vaccine, within a very, very short period of time the disease that you are immunising against goes away,” he says.

Tall, bearded and forceful, Emini is an unlikely corporate hero. As an undergraduate he rode the subway to Manhattan College in the Bronx and went to graduate school on a government fellowship. In 1983 he left academia to go to Merck because, he says, “I really liked viruses.” His first project involved the vaccine for hepatitis B, now the first shot given to children when they are born. Then AIDS hit, and starting in 1987 he developed HIV drugs such as Sustiva and Crixivan, among the first potent treatments for the disease. In 1996, he was made head of vaccine research at Merck.
It was a heady time. His group developed vaccines against chicken pox, shingles and human papilloma virus, which can cause cervical cancer, and they were working on an AIDS vaccine. “We were able to actually get a lot of stuff accomplished that, if the bureaucracy had had its way, wouldn’t have happened,” says Alan Shaw, the researcher who had the office next to Emini’s.

In 2004, Emini left Merck to try something new, he says. Others say Merck’s new research chief, Peter Kim, was considering another guy to run vaccine research. Either way, Emini departed, and Shaw and several other top vaccine researchers left, too. Emini’s first stop was the Gates Foundation-funded International AIDS Vaccine Initiative. There he discovered that it was going to be “very, very, very difficult to develop an HIV vaccine,” even with Gates’s billions on his side.

So instead of solving the AIDS crisis, Emini went to Wyeth to work on something more mundane: Pneumonia. Their Prevnar vaccine was based on technology Wyeth had purchased in 1994 that taught the immune system to recognise sugars on the outside of bacteria. 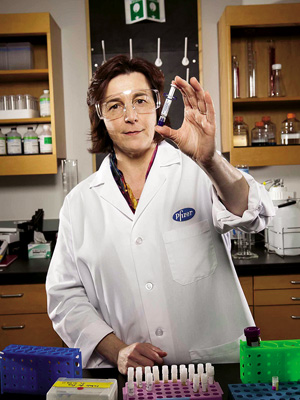 Image: Nathaniel Welch / Redux for Forbes
VACCINE QUEEN Pfizer's Kathrin Jansen
A first vaccine using this tech nearly eliminated the haemophilus influenzae B bacteria, once a leading cause of brain damage. Introduced in 2000, Prevnar was already a success, reducing not only pneumonia but also ear infections. It did such a good job getting rid of pneumococcus that adults got sick less, too.

Emini saw huge potential for a new version that could prevent 13 different strains, compared with the 7 covered by the original version. This Prevnar 13 would protect against a deadly, drug-resistant pneumococcus strain called 19A, which had been causing a rising number of infections in kids.

Prevnar 13 might also reach a big new market: Adults in hospitals undergoing procedures like open-heart surgery, where pneumonia is a common and deadly complication.
Wyeth executives wanted Prevnar 13 to reach the market in five years — an almost impossible task. Emini flew to San Francisco and showed up at the doorstep of another Merck expat, Kathrin Jansen, a German microbiologist who had developed Merck’s Gardasil, the vaccine against the virus that causes cervical cancer. She had left to work on anthrax vaccines. Emini put her in charge of the most difficult part of getting Prevnar 13 to market: Running the tests on anonymous blood samples of patients in clinical trials to prove Prevnar was turning on an immune response to the pneumococcus bacteria.

Dozens of her researchers worked around the clock. She held a party at her house to keep the group’s morale up. When Jansen apologised to one scientist’s wife for keeping her husband away from his small children, the woman responded that the vaccine work was too important to society for her to complain.

Now success is close. A panel of FDA experts just recommended approving Prevnar 13 for adults. And Emini has pushed forward on an 85,000-patient clinical trial in the Netherlands to prove to doctors its effectiveness. If the trial shows Prevnar 13 can prevent pneumonia, “the interest of physicians and providers would shift very strongly toward that vaccine,” says William Schaffner, chair of preventive medicine at Vanderbilt University School of Medicine. Emini is optimistic. “We emptied out the HIV wards when we introduced a new drug,” he says. “I’m begging to feel [that] again. That’s a head rush.”

Tweets by @forbes_india
China: The Time For Noblesse Oblige
Hollywood's Most Overpaid Actors